There has been a revolution in our household. Since I gave Alli an Apple Ipad as a wedding anniversary present, she has scarcely been off it. She uses it to listen to BBC Radio 2, receive, check and send emails, and also now to play a scrabble-type game with random people simultaneously from around the world, and in so doing, she exchanges casual banter with all sorts and receives invitations from nameless people, presumably male, to be their mistress (sight unseen, no less). 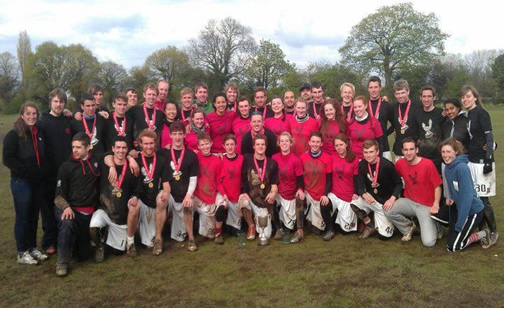 The Mohawks and the Squaws, April 2012

Jessie and Faron came back from playing Ultimate Frisbee in the Paganello competition in Italy where their University of Sussex, Brighton team won the “Spirit” prize for knowledge, fair play and generally being good guys. Back in England their teams, the Mohawks and the Squaws of Sussex University (men’s and women’s teams) each won the outdoor national university championships in Manchester for the second year running. So, in effect, we have a national champion in our midst. Ella spent Easter with us, working, socializing, social networking, networking. and preparing for her driving test, which looks a lot more difficult than it was when I took it 36 years ago. We invited the Kellys to Easter Sunday lunch and had excellent conversation, roast lamb and an Easter Egg hunt. A few days later we had other good friends around for lunch midweek. Gwen, Jessie and I went out together to a very acceptable sushi restaurant in Huningue. We also went to the cinema twice, a rare monthly record, to the (rather different) BBC-made British films The Best Exotic Marigold Hotel, and We need to talk about Kevin. The month finished in fine style with the visit of our Belgian friends Laurence and Claude, and an excellent dinner with them at La Couronne d’Or. 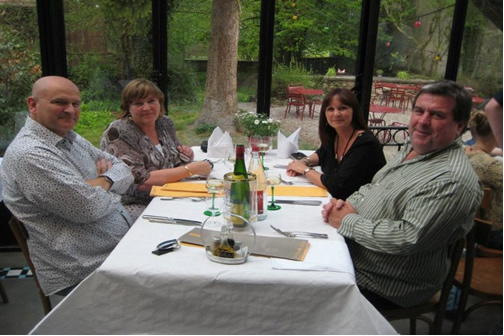 We decided for the first time ever to hold a party to celebrate St George’s Day and Shakespeare’s birthday and to invite all the English and others with strong English or British Isles (or, erm, Commonwealth) connections in our village.  About 70 people came (out of the village population of 1221), many of whom we had not previously met or known. Gwen and her friends gave red rose buttonholes to everybody and we slapped on vital victuals. People seemed pleased to have the opportunity to meet each other, as many hadn’t, and we are now thinking of setting up a web site for Anglophone Leymen residents.

For most of the month the clouds rolled over themselves and spilled repeatedly with rain, darkening and drizzling, raising mists and moist, brumous vapors, foggy vespers and dark humors. We even had a coating of snow on Easter Sunday morning. It wasn’t quite as bad as that description of the March sky in Baudelaire’s poem from Spleen: « Quand le ciel bas et lourd pèse comme un couvercle sur l’esprit gémissant en proie aux longs ennuis».  But it was close. Talking of gémissant, Alli and I were called to neighbor Martin’s assistance one morning to summon a samu (ambulance) as he could not move even a muscle without agony, which also occurred sharply when he laughed or talked. Unfortunately he was apt to do both, and so was taken away with difficulty on a stretcher complaining that my sense of humor had left him in extreme pain. At hospital, he was given morphine, about which he wrote “Lethe-wards I had sunk and was rather enjoying it”. This was more Baudelaire than Leary or Huxley, but a prosaic broken rib was diagnosed and he is now on the mend. As is the weather, which has now returned to at least Shakespeare’s  ‘uncertain glory’ of April, “which now shows all the beauty of the sun, and by and by a cloud takes all away”. During one of the dry spells, our friend Jasper came over to give our lawn a healthy and improving dose of chemicals, having helped to eliminate most of the weeds last year. Jasper has a wholly benevolent interest in improving the quality of the lawns of all his friends and spent virtually the entire day in rather fetching sprayer’s galoshes and stylish personal protective equipment in and around the hissing lawns of Baselland and the Sundgau.

The centenary last month of the sinking of the RMS Titanic recalled Alfred Augustus Stanbrook, the uncle of my grandfather. He was a stoker and fireman from Southampton, and his fate was one of the few inherited family stories I was told when I was a child. I have found about more about him since, thanks to the snowballing internet-fuelled interest in the Titanic on both sides of the Atlantic. He was working in the ship’s engine rooms, and one of those who worked on despite the sure knowledge of certain death. His remains were retrieved and buried later in Nova Scotia.

At exactly the wrong time of the year we have brought the long running story of our hitherto inoperable kachelofen to a successful conclusion. Believe it or not we have a wood-burning stove that trebles as a bread oven, central heating system, and an eclectic work of art in expensive black Indian slate, with a tiled chimney that dips, coils and snakes around the house then turns back on itself twice to heat the lounge and a stylish black slate-covered seat built into its wall. The fire boasts a mechanical fan and a computer, which moderates the draught according to its own assessment of the heat, the smoke and the water content of the wood. But after some dedicated work by those who first installed it, we have now taken control of it and its handheld monitor. Our house feels like a real home now with a reassuring background smell of wood, charcoal, heated slate and the low clicking sound of the fan. 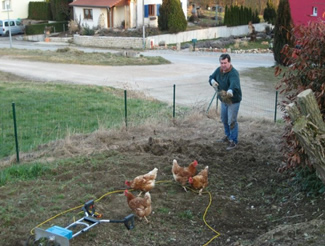 Lionel and the chickens, April 2012 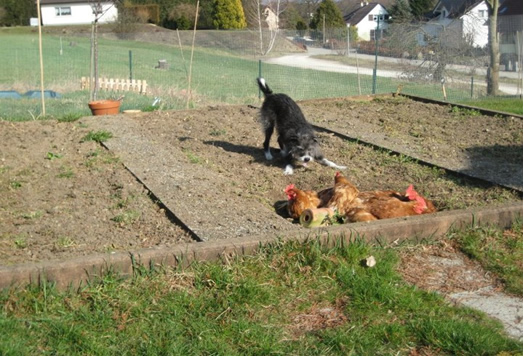 Bonnie and the Chickens, April 2012

I spent some time in Zurich, wandering around its old center after a meeting, and was again struck by its lack of pretension and its fullness of style. Two extraordinary historic and cultural sites are within a few paces of each other. First the balcony in the quiet square just by the Rhine where Winston Churchill in November 1946 first invoked the spirit of a rising Europe from the ruins of the Second World War (that had, admittedly, just taken place largely elsewhere), and inside the Fraumunster next door, the five enormous devotional stained glass windows made by Marc Chagall in his twilight years for the cathedral in 1970.

Yours from under the arches,

Ahem While I have been very comfortable over the last[...]