Alli and I have been going out together! Yes! We have had dinner together at least five times this month, in what really must be an all-marriage record for a single month. We ate at a Lebanese restaurant in Basel with another couple who made the evening even more enjoyable by paying for our dinner afterwards, then we all decided to visit the nearby pool hall, where we thought that Jessie might be hanging out that evening. She wasn’t there but we had an amusing time remembering how to play pool together. It turned out that Jessie and her mates do not patronize that hall any more. Too smoky. Alli and I also went out together on the evening of Jessie’s birthday party (taking place in our house), fulfilling our promise that we would not be there while the party was going on (for at least 90 minutes). This meal was not a success as Alli was fretting about the party, we were the youngest couple in the place by at least a generation, and the service seemed designed to ensure that we and other non-Swiss people should really take a hint and stay away. My favourite team had also just that afternoon lost in the FA Cup Final by a whisker. Our other meals were taken on a mini-break last weekend to the Lake Como region. We dined with leisure and luxury in between serene boat trips to picturesque villages such as Bellagio, Mennagio and Como. On the way to Italy we had stopped for a night in Interlaken, having spent much of the day at the preposterous Mystery Park nearby, conceived around the idea that the Earth had been visited by extraterrestrial astronauts. This was a theme park as no other, the brain-child, design and construction of a Swiss national by the name of Erich von Daniken (remember him?).

I can hardly believe that Jessie has turned fifteen years old. It really does not seem that long ago when she was born on a warm but overcast early afternoon in the Radcliffe Hospital in Headington, Oxford, just after Alli had been denied a painkilling injection (the famous “epidurabubble”) because the birth time was too close.

But these teen birthday parties are becoming more problematic every year. Beer has made a decisive entrance, in the form of our contribution to the party of a big bucket of beer cans in ice. In one hilarious incident the boys opened all the beer cans and bottles then poured the contents back into the bucket, before tipping the bucket over their own heads.

Gwen has featured in a concert given by the International School. I was impressed with the music teacher who had made the children into musicians. Gwen enjoyed her stint, singing songs from the Japanese, German and African-American repertoires (for the last of which her friend Carter was awe-inspiring as he played effortless blues on his xylophone).

Gwen and I went on a very long bike trip together through and around Basel to celebrate May Day. We had also decided to take a picnic lunch with us and to stay out for some time. The roads were virtually empty and the sun was warm as we started through our village of Oberwil and took the cycle path from the tram station. Gwen kept a very straight bike as the path narrowed by the canal towards and past the zoo. We eventually came out in the city and I decided that we might as well continue across the Rhine and follow the Wiese, a tributary that flowed down from the Black Forest towards the north. Gwen was not complaining (far from it) so we just kept cycling on together for several kilometers along the riverpath and roads. Gwen kept steady and straight on her tiny bike even while cars were passing to the side of us. We stopped at a bench in the woods beyond the Tierpark to have our packed lunch. Afterwards, it was a long way back but eventually we got to the Munchenstein bus stop, after several deviations, unexpected discoveries, backtrackings and one or two minor accidents. When Alli picked us up we had been cycling in the sun for five hours, and certainly had covered more than 25 kilometers.

The following weekend we had another long bike ride together. This time we went on a rural ride. It was another warm day and we cycled towards the French border and stopped by a log cabin in the woods to eat our picnic. Afterwards, as we were going down a particularly picturesque part of the Alschwill woods we were halted by a man in an official car and a stupid cap. He was grim and rude, and told us to get off our bikes as this was not a path on which cycles were allowed and why the hell didn’t we already know that? (a loose translation from the Swiss-German).

We have had our customary Eurovision Song Contest Party with our neighbours, many of whom on this occasion were Swedish. The Swedes take Eurovision very seriously and our friends were quite shocked by the irreverence of Terry Wogan’s commentary. The Americans present were completely confused by the whole thing. Will the contest ever be the same now that a garage grunge band of snarling auks from Finland has won? I think this will change the psychology of our Eurovision Parties in the future. People might begin to listen to the music, which would be a disaster for the social intercourse. Not to mention aukward. 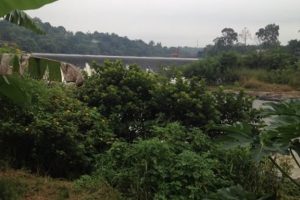