Snow fell repeatedly on snow; frosty wind moaned; the ground was iron and the pool solid. The avant-garde Tinguely fountains in Basel’s Teaterplatz  became post-modern icicles, and the barometer on our porch did not even rise to freezing point until St Valentine’s Day and once sank to a low of minus 25 C, killing some of our shrubs and bushes. Throughout this the chooks of Chicken Karma laid eggs and seemed fine although a touch testy and ruffled. 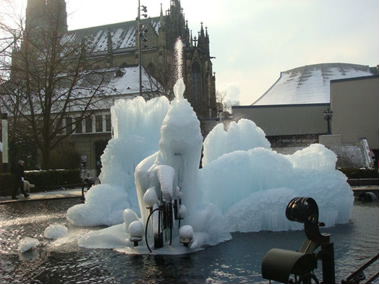 One of the three actual job interviews that I have had in over 120 applications in the last six months was in clear-breathing Lugano, a town set comfortably in the Alpine south of Switzerland (and host for the first ever Eurovision Song Contest in 1956). After not getting this job or anything else remotely suitable, I went full speed ahead with my venture Clement Reputation, publicly exposing my hyper-ventilated spleen in grumpy blogs about bankers, hackers, celebrities, the Daily Mail, Kim Kardashian and Our ‘Arry. Some small writing commissions have been requested and duly completed, and so I am up, off and running.

We had dinner with our neighbors Marion and Simon, comfortably surrounded by music and musical instruments. This produces, I imagine, much contentment but I should not have mentioned that I used to play the cello, as I was of course immediately challenged to do so. (I used to run 440 yards in 54 seconds, but I can’t do that now either). We also went to a party given by Chris and Maggie in Reinach and I participated in late night interweaved debates about unclear Swiss road markings and the 70s cult film classic Soylent Green, of which I am a serious devotee. I will admit that these debates were more interesting then than they might sound now. We went to a Lebanese restaurant in Binningen with some good friends, and I dined at L’Ange in Leymen on a very cold night with four other men whose wives were playing gin rummy at a cards evening at our house. A bit like the setting for an Agatha Christie novel. I came back at midnight under a hunter’s moon expecting to find a body in the wine cellar. (Actually I did, but it was alive and looking for more wine).

Our family friend for over fifty years, John Billinghurst, died in early February. I went to Sevenoaks for the moving and inspiring service of Thanksgiving, feeling fortunate to represent the wider Stanbrook family. My cousin Ann was also there to represent the Clements. John was a warm, benevolent and befriending man who made it look easy and liberating to be a committed Christian, and the church was full of his friends and family from all ages and areas. The mighty Abide with me was sung; there were readings from C. S. Lewis and from Revelations; and emotional recollections of his life and times by those who had been lucky enough to know him well.  Afterwards I stayed with Nigel and Andrea in their bright new house in Tunbridge Wells, attempting unsuccessfully to visit Chartwell and Hever Castle the next day. I returned to Basel just before the beginning of its annual carnival, the Fastnacht, and just before Alli and Gwen set off in the opposite direction for some days with Laurie and Kay in Sussex, leaving me and Bonnie to console each other. I was amply recompensed by being invited by the Barnes of Biel Benken to an excellent dinner which included fava beans and Chianti. Where on earth have I heard that combination before?

Yours, silent, on my Tod, 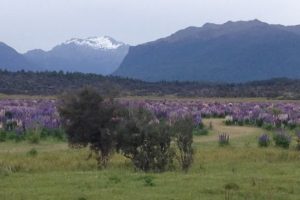 Ahem I’ve been busy. My mother occasionally used to say[...]