The first weeks of the month afforded few favors to those who regard Beltane as starting the light half of the year. The maydays were gloomy, only giving way in the last ten days to a speculatively cool half-spring, and, from the final weekend, a blue-sky summer. But the month of May is always exciting, with flowers, grass and weeds bursting into bloom everywhere, except, unfortunately, in our frost-ravaged edges and hedges, which remained matt green practically throughout the month. I was surprised to see an irregular bunch of glorious royal blue cornflowers growing at the back by the fence. I had thrown some seeds there last year and had since forgotten about them. The vegetable garden is growing slowly, while everything wild and out-placed is having a field day. My brilliant idea to add CDs for hands to Alli’s innovative scarebuzzard has been a failure.

Jessie celebrated her 21st birthday in Burgess Hill with some student friends, buckets of Pimms, pots of chili, a swingball and a frisbee. After much detailed and delicate negotiation, her grandparents consented to have the annex of their house used as the venue for the occasion. Misgivings were traced, nay, scrawled all over my father-in-law’s kindly beaten brow. His memories of student parties derive probably from the days when I (or, less conceivably, he) was a student. But all went well on the evening, as Jessie had predicted. The only damage I noticed after the party was a slight scuffing on the grass around the swing-ball, this also due to the light drizzle that fell in wafts throughout the evening. I attended the party in its earliest phase and, embarrassingly, for my paternal status, was well beaten at darts by Jessie and by Faron. Whilst in the UK, I also spent time on my slowly increasing work commitments, attending a proposal-writing and brainstorming session in Surrey with some colleagues in a meeting that postdated the official incorporation of Clement Reputation GmbH on 2nd May. I had lunch and witty banter with Mike and Marie-Pauline at the sumptuously relaxed River Cafe in Hammersmith and dinner with Debbie in cosy Battersea village. I also took Jessie and her flatmates out for lunch at the refurbished Devil’s Dyke Inn with its stunning views over the Sussex Weald and the Dyke itself, and returned to take her and Faron out to dinner at Jamie Oliver’s Italian restaurant in Brighton on the evening of her birthday. This was eclipsed by Faron later in the week when he took Jessie to a West End matinee followed by a top restaurant in London. All the girls are now experiencing the thrill of exams in varying degrees. Gwen has been revising determinedly, seriously and for very long hours at home, and unfortunately had to take her exams while she was unwell.

Ella, after attending a May Ball at Loughborough, has dyed her hair brown. I don’t think that there was a connection between the two. 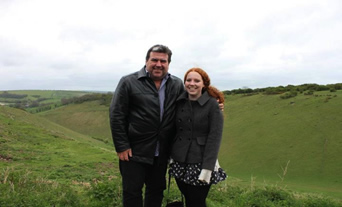 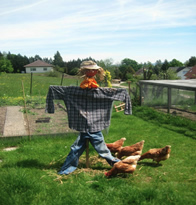 Scarecrow and Chickens, May 2012

Alli and I went to dinner with the Barnes of Biel Benken, marveling at the quality of their lawn and their new automatic awning that can sense exactly when to extend and when to retract. I wouldn’t mind one of those sensors for my own personal purposes, to be honest. I am, as my mother would have said, “in a spate of forgetting things”. Already notorious amongst practically all my friends, relations and acquaintances for forgetting almost anything in the shorter term, I have been distinguishing myself even more recently with lapses of memory involving the care of the chickens, the garage door, my washing bag (twice), my man-bag, various books, spectacles, and countless items on various shopping lists. However, my long term memory is almost perfect and it’s getting better all the time. I predict that it will soon expand to genuine real time memory.

Perhaps to mark this sign of senescence I am growing a modest beard and moustache. People ask me why I make such a portentous statement at this time of life. I tell them that it all started when I decided to become a Muslim and got followed by a moonshadow. At this point brows furrow darkly and I am looked at in a curious manner. I had a rare sport-derived pleasure when West Ham returned to the Premier League in a flue of bubbles, jellied eels and knobbly knees-ups. In the end I missed watching the key match, assuming that I would get a viewable stream from the computer which I didn’t, so instead I sat and listened to the live radio coverage, feeling ten years old again, when I used to listen to Renton Laidlaw and Tim Gudgin on the crackling Bakelite wireless on Saturday afternoons in the 1960s.

This month I survived a more modern rite of passage, moving with considerable difficulty from a Microsoft PC to an Apple Macbook. Ahem therefore comes to you in the guise of original sin. Talking of which, my web site has been banned by Hoffmann La Roche because it has “adult content”. I used the word “slut” in a blog (I was only quoting Rush Limbaugh). Anyway, all transition to the Mac is now done and although my emails have survived intact, their date stamps have changed for ever and I no longer have chronological exactitude. Nor the same mailing list. So do let me know if I start repeating myself, or if you are receiving Ahem for the first time and don’t want it.

I wish you all a very Happy Silver Jubilee Weekend. Vivat Regina!