Ella has landed her first job in journalism, getting selected as the music editor for the Loughborough University magazine, Label. She has to manage the editorial section, decide what to write about, which articles should go in and which should go online, as well as manage the team of music writers. In the next year she hopes to be interviewing some major figures in the world of pop and rock, and all the assorted sub-genres. The announcement on Facebook was actually “liked” by no less than 38 people, so that’s a flying start in the world of journalism already.

Alli, Gwen and I went to the Diamond Jubilee Festival in Hegenheim, which attracted nearly 500 people, of which a large proportion were other British expatriates. The party took place in a big garden at the top of the village, and the lawns, just recently laid, had a very bad day.  It was just as rainy in Alsace as it looked to be on the Thames at exactly the same time but I heard few complaints (apart from the bloke whose garden was being ruined), and it does seem true that the British put up with their parades being rained on rather better than most. My friend Peter led a merry side of Morris Dancers in the mud, while my friend Martin was chief barker albeit with a hangdog mien and with scarcely credible cheer as the driving rain carried on determinedly through the egg and spoon, three-legged and other similar races. There were several bedraggled stalls and games, although sensibly under cover were the real ale and home made tartlets, sausages and pork pies, a thoroughly businesslike cake-stall (how easy it is to understand the success of the Women’s Institute!) a coconut shy and face-painting. We had scarcely arrived and I had just tasted my first beer (the aptly named Tanglefoot) when, on an initial bounds-beating expedition, I found myself slithering like a rookie skater on a mudslide that upended me right in front of the cream of the British expatriate bourgeousie, sitting prettily under parasols and regarding me with a mixture of dainty distaste and absorbed fascination. My plastic beer glass stayed intact with its slopping ale right until the end of the slow motion collapsing manoeuvre, when I, struggling to my feet, slipped again like a flailing drunken sot in a cartoon and lost the beer to the roses. Thus muddied, I staggered to my feet raising a small cheer from the menfolk under the canopy. To be honest, I was sober but I must have looked like the local soak. I know this because later as I was putting in a stint serving behind the bar, a man with a red face came up, looked at me knowingly through his filmy eyes and said “run out of money, old chap?, need a sub?” 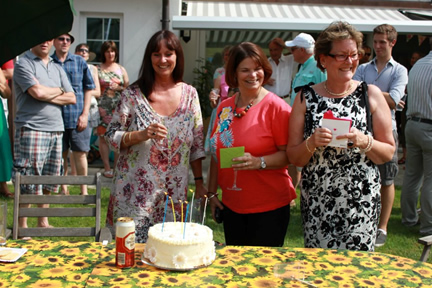 The rain did not, however, trouble us for the triple 50th birthday party at our house for Alli and two of her best friends Leann and Nicole. It was a gloriously hot day, one of those for which the house and garden offered their very best aspects.  Alli’s parents, sister-in-law and brothers came (one of these by surprise), along with over 100 guests. Alli’s actual 50th birthday is not until 7 September, but we wanted to take advantage of the fine weather (and split the costs). We had Peter the Squire’s Morris dancers, (who had agreed to appear only if I came along later to give Morris dancing a try), a warm and well populated swimming pool and a huge amount of food and drink. The party entered into its evening phase with a lively and enjoyable diner champetre on long tables joined together in the garden. We were just finishing when the first rumbles of the expected thunderstorm could be heard behind the hills. Providentially therefore, the party, which had unfurled in sun, bright blue skies, summertime conversation and lazy warmth, ended in timely fashion with deafening thunder, flashing lightning and the onset of yet more rain, which then continued determinedly for over two days.

Ella came back from Loughborough University well pleased with her first year’s achievements and Jessie came a few days later accompanied by her boyfriend Faron. Both Jessie and Ella will have holiday jobs for part of the summer, thanks to my generous ex-colleagues. I have been to the International Comedy Club of Basel a couple of times and was interviewed to camera by Swiss television for my views on the differences in national senses of humor. None, I said, sycophantically. The annual International Show organized by the International School was the best yet, a record number of stalls selling food and drinks from many different nations, a searing hot day requiring the consumption of record amounts of pisco sour and Old Speckled Hen and similar permutations, and plenty of excellent acts and recitals in the main hall. On father’s day, I was given several presents and well-chosen cards by our obedient children, including a pair of slippers and a garden hose (somewhat mutually exclusive, I suppose, but then, I do tend to water the garden and open up the chicken coop in my old slippers.) Alli, Gwen and I went on to lunch with the Richards family in La Couronne d’Or in the village, eating well enough to feel guilty about our infraction of the Harcombe diet, to whose wreckage Alli and I are still clinging, after an excellent first five days of detoxification.

Basel is a revelation in the summer. The Baselers seem to take the solar hint and slough off their habitual facial expressions that say “I have a good pension but I am still worried” and let it all loose while the sun is out and about. Surly cafe owners only speaking svizzerdutsch suddenly rediscover their English, and Italian, French and even High German and dance around the pavements offering largesse and amiable bonhomie to anyone stopping by for a coffee or a beer. Sour-faced young people suddenly start splashing in the fountains and cattle troughs and kissing people in the street. There are free concerts, open air cinema shows, jugglers and fire eaters, music and theatre in the streets.  The Zurich stock market and the fortunes of UBS are forgotten just for a while. Talking of money, Art Basel took place, bigger and better than in previous years and Alli’s schoolfriend David came to stay for a night to sample the exhibition, which mostly attracts wealthy collectors, aesthetes and thousands of acolytes.

Yours in the frame,

Ahem Sailing and I have never been close. My brother[...]