We have had our friend Ramon to stay for a last few days before he went back to New Zealand after spending some months in Europe.For his last weekend in Europe, possibly for many years, we opted for the total European experience and so all went together into Alsace to see the Chateau Haut Koenigsbourg, a fine, imposing, not to mention huge, castle perched on top of one of the biggest hills in the area just north of Colmar, exactly at the epicentre of the most disputed territory in the centuries-old Franco-German conflicts that finished in 1945 with the confirmation that Alsace (and the Chateau Haut Koenigsbourg) was definitely French and no more messing around. We first had a good and simple lunch at the restaurant there then walked around the castle. There were some spectacular views on all sides, and we marvelled at the quality of the restorations. The castle seemed as if it was carved from the stone cliff itself. Afterwards we drove into Colmar then wandered around the picturesque streets and alleyways. This prompted Alli to do some fairly serious shopping, as she was impressed with the clothes shops and a shopping glint had definitely appeared in her eyes. Ramon and I did a lot of waiting around for Alli as she went in and out of the shops with Gwen, but we did not mind as the afternoon was sunny, warm and pleasant. I just fingered my wallet nervously.

The following day we elected to go into the Black Forest, the same general direction, but over the Rhine to the north-east of Basel. As we wound around the foothills on the road leading to and northwards from Lorrach, gradually the scenery became more and more forested until after about an hour it was official from the style of houses and hosiery that we were definitely in the Black Forest. On taking a turning up towards Freibourg we noticed a sign to a waterfall and so we decided to inspect this. After five minutes’ walk we were soon looking at a spectacular waterfall coming off a cliff in the middle of the forest. We returned to a nearby restaurant and had an excellent lunch. Gwen was extraordinarily hungry and managed to finish her meal completely, despite the German size portions. We then proceeded on a winding road towards Freibourg and walked around the cathedral close before returning to Basel.

Although these were sunny days in November, it continues to get colder and colder in the mornings. Overall the weather has been clear with bright blue skies and earlier in the month was even quite warm. However, the first snowfall in Basel came last week. My Australian colleague – who has seen snow once in her life – was struck dumb with shock and was unable to think straight for most of the morning.

My Saturday afternoons with Gwen continue and we had a memorable day hiking together in Rejgoldswick, south of Basel – gateway to the Jura. We went by bus – about an hour’s journey, although the time passed quickly with word games. We had to find something beginning with every letter of the alphabet appearing outside the bus, and by this means we managed to get to Q at just about the time that we arrived at our destination. This was fortunate as we had been stuck on Q for some time anyway and couldn’t find anything. Where the hell are quechuas when you need them? It was sunny and cold as we got out and walked to the cable car entrance while Gwen collected little flowers along the way. Ten minutes later in the cable car we were nearly at the top of the mountain. The air was colder and I took the walking sticks that Alli had given me earlier in the year and started to use them for the first time. We walked for about half an hour further up the hill along a well used track. Then we stopped and admired the view, and Gwen used the sticks for part of the way down.

We have all been in England, staying with Alli’s parents and seeing our nieces and nephews. After getting used to the meticulously exact transport system in Basel, I was not prepared for the full horror of my day on British public transport, trying to get to Guildford from Burgess Hill. I first took a train to London, because the train I really needed to take was suddenly cancelled just after I bought the ticket. There were reports of difficulties on the line at Clapham Junction (well founded) and so, guessing, I got off the train at East Croydon thinking that I could make it over to Guildford by changing there. As angry crowds milled around East Croydon looking for spaces on the next train going towards Clapham Junction, a harassed railwayman told me in what appeared to be Welsh that I would need to change at Clapham Junction for any train to Guildford. I squeezed onto the next train, which made the journey into Clapham Junction at around walking pace, and where I changed onto an even slower train that took the best part of another hour trundling to Guildford, where there was a long irritated queue for taxis outside the station. One day, taken at random, trying to get around the rail network in England.

You want to go where? 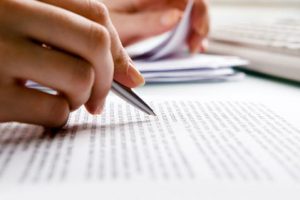 The right words… Clement Reputation writes words in the right[...]