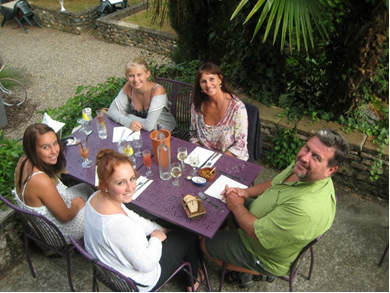 There are some smells in daily rural life that can only be described as irredeemably evil. Over this neck of the woods periodically wafts an odour (or should that be ordure?) which I am sure is the authentic and original smell of organic farming.  Can one be pro-organic but reject the smell of hell in one’s own back yard? It’s a fascinating philosophical question to consider while tightly holding one’s own nose. Following the season’s late first cut of the meadow next to us, the muckspreader trundled out, spraying from a huge tank behind it with precise abandon like a ship in tribute, often while we were in the garden or in the pool, and sometimes perilously close to the fence. Once the smell had Gwen sprinting straight from the sunlounger to the confines of the house. Inevitably, flies of the most irritating kind imaginable followed the manure slopshot, and our kitchen was the backdrop for a family fly-swatting frenzy. Out came our electronic fly stunner shaped like a tennis racquet, and just in time for Wimbledon.

Alli’s parents, who had arrived for Alli’s party at the end of last month, stayed for a few days afterwards, lodging happily in our pool house. Laurie once again went around our house and garage mending, tidying, and fixing things as he went, doing more in a couple of days than I would have managed all summer.  We had our friend Sue and her dog Bertie to stay for a few days, also in the pool house, while they were in between houses. Matt and Marli, two American friends of Jessie’s, came for a weekend on a key stage of their Grand Tour of Europe. Jessie had met one of them in New Zealand two years ago. After they had spent a day in Basel, we all (I, Gwen, her friend Puck, Jessie, Matt and Marli) went into the Black Forest on a bracing bright Sunday, taking the ski lift at Todtnau to the top of the Hasenhorn, had a beer and a bratwurst, then came down again on the Coaster toboggan run, then drove on to a cafe by Lake Titisee and had a black forest gateau. We came back on the autobahn and had a Swiss raclette at home for dinner. On the same day Ella came back from a five-day girls’ outing to Alicante. The Stanbrooks all went back on a diet the next day, with strict instructions pasted on the fridge door.

The weather turned hotter just as we went on holiday to La Hune, our house in the south west of France, putting an early end to the diets. This was the day after Ella’s 19th birthday, which we celebrated with dinner at Papa Joe’s and lunch at Lily’s. She had very good results from her first year at Loughborough University, turning in a 2/1 in her exams. Jessie also achieved a 2/1 for her second year at Sussex, which accounts for nearly half her marks for the degree itself. She has also been busy with her crafting, and has started to make clothes. She explains all in her blog on www.imake2.blogspot.com and also has an Etsy store: www.etsy.com/shop/jessiekays. And while you are on, why not follow Ella’s tweets on contemporary music for the Loughborough Student magazine on @labelmusicnews.

For the first time in many years I drove down to Mansonville on a route across France that did not involve motorways at any stage. This was a calm journey. No peages, no mindless driving, no tailgaters, more and better sights of interest along the route. We took only a little more time than I would normally take using the motorways. It was a revelation: I felt relaxed, even when upon arrival I realised that we could not get into the house (at 1am). We had to call the ever helpful Jacques from his bed 20 kilometres away to let us in. On the next day, wandering around the village with all three daughters, Gwen’s friend Puck and Jessie’s boyfriend Faron, as well as Bonnie the dog, I became reacquainted with all the village characters in their colourful variety. Our house, La Hune, had recently been broken into and some minor damage caused, although nothing appeared to be stolen, but the swimming pool had been damaged by local vandals.  I was reassured by many that they would help me to bring the miscreants (les “voyous”) to justice, and offering to act as my lynch mob for the prime suspects if I did not fancy waiting for the creaking Napoleonic machinery of complaint, verification and indictment to apply itself. It certainly helped that the principal miscreant, having been leant upon by the elders of the village (who included all of his uncles) presented himself at the gate one evening and offered me a well rehearsed and apparently sincere apology for which I could not but be impressed. While wondering what to do in the ways of punishment, retribution, reimbursement or deterrence, my appreciation for the area and its people deepened further when my wallet was handed in to the police after I left it at a petrol station in Valence d’Agen. As in many previous such examples, it was intact. I found the name and address of my guardian angel and left a bottle of champagne on his doorstep with a suitable note. The following day our car broke down and had to be towed to a garage in Castelsarrasin for engine surgery: I was immediately offered the use of a car for a week by no less than three different people from the village. I am aware of how fortunate I am (in many different ways), and how unfortunate is the “voyou” with his tragic family history, his low job prospects, scarce opportunities and lack of money.

On our first outing for dinner in the new and much improved village restaurant, Le Saturnin, we were greeted regally by Vivou, a particularly colourful character whom I had last seen stumbling around the village blind drunk having lost his liquor licence and wife. The wheel of fortune has turned and he is now practically the Maitre D of the gleaming new establishment, being the consort of the good lady who bought the concession. He offered us all a Ricard, flicked his shoulder-length white-yellow tresses back from his face, eased his large frame into the seat on the sunlit terrace, and told us that life was good. And, of course, it is.

Our friends Martin and Jane joined us after Jessie and Faron left and we moved to a daily routine between swimming pool, sun lounger, dining table and cafe terrace – where the girls would check emails and all the social media platforms to which they have become accustomed – with quicker bursts of activity in the local towns, markets and restaurants. Gwen had a third ear piercing in Valence to add to her blue “dip-dye” earlier. We celebrated Puck’s fifteenth birthday with go-kart racing, a dinner in Auvillar and the night market in Valence d’Agen. Gwen, assisted by Ella and Puck, started on making a video about La Hune that I could include in the web site (www.lahune-mansonville.com) and I worked inside the house on the occasional mornings when the sun took its time to get up. We also had dinner at the Auberge de Bardigues with Martin and Jane and our much-missed friends Edith and Mark with their boys Sander and Jasper.

Yours turning the wheel,