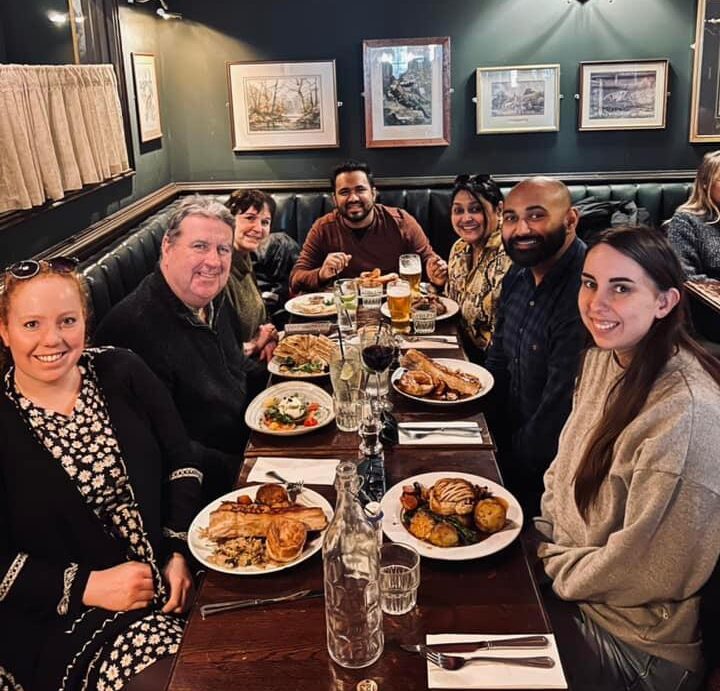 A small section of the road outside the house was resurfaced one day without warning, with a lorry, a paving machine, several vans, and a team of hi-vis jackets. This stopped all traffic, including ours, from using the road. It followed a similar instance a few weeks ago, when a footpath signpost just outside our front gate needed straightening. A few weeks before that a major three day-long operation resulted in the word SLOW being painted on the road with supportive semiotics on the sides. Flanked by large oak trees, the road features impatient drivers on daylong repeat and the occasional marginal accident caused by lo-vis protuberances. It’s already dangerous to cross with dogs even with 50 metres of clear sight on each side. Riding a bicycle is suicidal. The road craftily changes its name just as it passes by the house and is about to get even busier with hundreds of new houses soon to be built at the bottom of the hill and 9-to-5 gridlock already de rigueur in the nearest villages of Hassocks and Ditchling. Even the modest, pockmarked Wellhouse Lane, which wanders past the side of our house by a few remote hideaways before giving up to a permanently muddy footpath, is beflecked with urgent warnings that ten toothpaste-white new houses will be built in the field opposite. Many of my dog-walks are place-checked by signs announcing imminent housebuilding and unjustified blocks of the rights of way, which are becoming an irritating weapon in this modern battle of enclosures. I am even afraid to discover new dog-walks in case the signs start appearing there as well. There is a proposal by a developer working with well-known Sussex landowner Eton College (supplier of corrupt PMs to the nation) to launder quantitatively-eased cash by building a new town below the South Downs near Lewes. This is across 5,000 acres of ancient fields around the picture-postcard villages of East Chiltington, Plumpton Green, and East Chailey. Posters everywhere call for Eton’s proposal to be rejected. Local vicars are handing out rifles to the farmhands. The land is worth much more than its projected sale price when used for farming, grazing, walking, picnicking, and picture-postcards.

Ella and Maisie came by on the first of the month with an early and typically thoughtful birthday present from my brilliant daughters – a ‘Fitbit’ to help me to lose weight. The gift is much appreciated and already in constant use, although I have not mastered it. My steps have improved by about 2,000 a day simply because the step-counter is always on my wrist instead of sometimes in my pocket. It also measures stress levels, calorie expenditure, pulse, sleep quality, and much else that may never be known. I am in genuine awe of the person who thought up the product’s title. After all, it could have been ‘fatbit’ or ‘fitbutt’. Anyway, apparently all the real professionals use Garmins.

Ella and I have also now seen the second episode of the Beatles film ‘Get Back’ in an evening that included an excellent puttanesca cooked by Sam. They, as well as Jurrat and Jessie, have also been to Broad Oaks for a classic Sunday roast cooked by Alli. Gwen and I have also been watching the reassuringly blood-spattered new Dexter series together. And I have at last made it to the London Stadium in Stratford, where I watched West Ham and Newcastle play a dispirited 1-1 draw with my friend Paul and his son Leo, for whom the spectacle was a first experience. The match looked no more exciting from the highlights later on TV. I think I might be over-rating live premier league football. 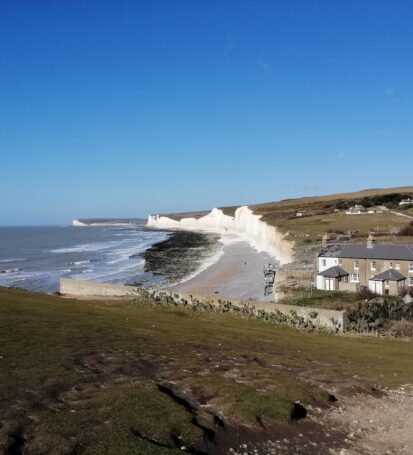 Jurrat’s sister Ruthba and her husband Razu were in England from Bangladesh for a few days visiting Jurrat and Jessie. Alli and I had been delighted to meet Ruthba in Dhaka four years ago. I drove them all to the Birling Gap where we walked half way to the Belle Tout lighthouse (used in a Bond film, now a B&B), and then drove to the pub at Beachy Head for lunch. The next day Ella ran the Brighton half marathon, achieving a new personal best time of 1’51”. Alli, Sam and I took the train to Brighton to join Jessie, Jurrat and Gwen to see her run and finish. I saw her rather later than intended as I was slower off the mark from the station due to a painful hamstring which left me hobbling around, holding on to lamp-posts around Brighton’s North Laine. After a quick coffee with us, Ella and Sam left to celebrate their ten years together as a couple at 5-star hotel Ockenden Manor. Alli, Gwen and I went on to have a delicious lunch at the Walrus (famous for its roasts) with Jurrat, Jessie, Ruthba and Razu.

Storm Eunice (which I always assumed was spelt ‘Younis’) delivered some limited damage around here, and plenty of roads were blocked the next day. I had just come back from a thrilling three-day excursion into the mystic lands of Dorset, Devon and Wiltshire. I stayed in Abbotsbury with cousins Tim, wife Sue and son Adam (Tim was in St Lucia messing about on a boat). Adam cooked an excellent vegan Thai curry for us on the first night, using his skills as the sous-chef of the local village restaurant. I also interviewed (unsuccessfully) for a job in Devon, met cousins Clifton and Marjorie at their home in Exeter, and along the way visited the St Catherine’s Chapel in Abbotsbury, Sidmouth Donkey Sanctuary, and the Tolpuddle Martyrs’ Museum in Tolpuddle, after crossing the river Piddle in Piddlehinton. 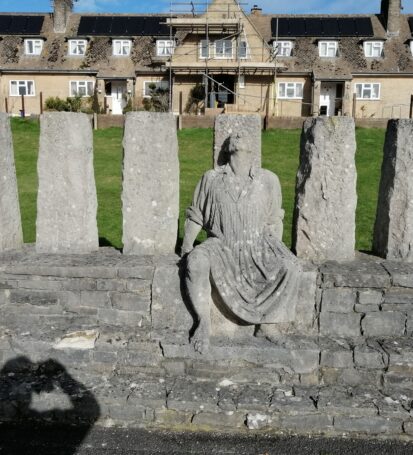 I spent a glorious four hours of rich reminiscence and recall (and a delightful lunch) on the way back with old schoolfriend Nicholas in Wiltshire. He is rightly considered among the best of living British novelists. I remember him as creative, funny and mischievous. He remembers me as ‘bright’ and ‘son of a Tory MP’. Together between 1966 and 1970 we negotiated the unusual rite of passage that was offered by the Dragon School in north Oxford. Having chosen a career in literature, he has since been on friendly terms with several of the Latin American writers that I read, studied and revered when at university. Last month I reminisced with friend Charlie in Barnsley, also an Old Dragon survivor in our year. Hearing about mutual schoolfriends from over 50 years ago has created an emotional and somewhat wistful start to 2022. I am enthralled by the sad and often tragic fate of those of our peers who did not survive to tell their own tales.

Yours in history, wistery, mystery and imagination 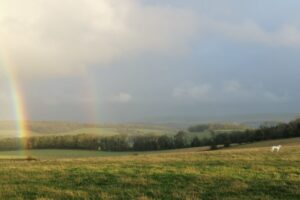