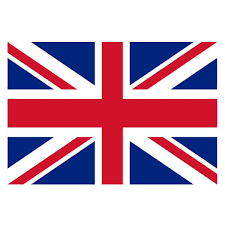 Waving a British flag around in public to garner votes has never been a commonplace British activity. It used to be considered rather tasteless, and for colour coordination it’s not exactly the greatest fashion accessory. Waving the flag (when not at war) happened on military occasions, ceremonies of international sporting events, or when the Queen visited your town and the local children, given flaglets, were marshalled in serried rows. Anything else was a bit infra dig unless you supported the National Front. This pro-fascist party used it in all their meetings and processions. It was then requisitioned by UKIP and the Brexit Party, whose members embarrassed an entire continent waving plastic Union Jacks in their final appearance in the European Parliament, and now the Conservative Party has snatched this apparent Golden Grail of political success. Even Keir Starmer, Labour’s laborious leader, seems to think waving a flag will help his party’s chances.

When Donald Trump somewhen hugged the American flag in front of hundreds of his faithful followers he was using a characteristically simplistic and non-verbal way of expressing what he could not express credibly otherwise. Trump didn’t have medals or war stories since he fought in no wars, the context in which patriotism is most often defined.

Flags are the trappings of populist nationalism and of nationalist parties. They are handy for wars and generally for killing and all the appropriate proxies. The flag is often wrapped around the coffins of dead soldiers to explain visually that these soldiers died for their country. Generically, the flag symbolises allegiance (follow the flag), but can also be a symbolic portrayal of strength, or a demonstration of solidarity or success, like the clenched fist, the military salute, the signed cross, the gang tattoo, and other badges, symbols, tags, logos and memes.

When UK ministers wave their flags at cameras, they are wilfully transmitting the same careless symbolism as ticking the ‘like’ box on Instagram or Facebook. It’s a sign that they wish to convey their patriotism in a minimally engaged way to the audience, presumably because they think the matter may be in doubt. The flag answers an implicit or unbroached question, replacing as does Polyfilla the lack of any other hard evidence of their love of country.

It is a sign of the new times that up to half the country considers flags and statues as symbols of their patriotism; supports legislation to protect them by law; and pretends to be outraged when they are abused. These moments of outrage are becoming a regular exercise in national insecurity. They prove that the flag is or has become much more than a symbol, and that waving it is a quasi-religious act, just as criticising it is infidelity or even illegal. This copy from the American patriot playbook is sure evidence of an unsure and uneasy set of values. Expect UK legislation soon to protect the flag from the ignominy of disrespect, just as ‘the Old Glory’ is absurdly protected in the USA.

Waving a flag is an ensign of allegiance, like the mark of the cross and the fish symbol for Christian cars, or the crossed arms of the West Ham football fan – all easy acts to perform and of course even easier to ‘like’, to follow and to feel part of a virtual movement. Instead, of course, of a real one.

The Union Jack is now an obligatory lapel badge for politicians, anxious for tick-box celebrity in our febrile polar political landscape. It was heartening to watch the impressive Angela Merkel, Chancellor of Germany, snatch a flag away from one of her enthusiastic party colleagues at a CDU party rally in 2016 and stow it firmly out of sight.

Less intelligent politicians wave the flag because they are running out of anything persuasive to say. The flag is a banal but self-contained statement: an ‘oven-ready’ response. Waving the flag (or clapping the NHS from your doorstep) is a taken as a statement of action in itself – deemed enough to settle the question of whether you genuinely love your country or genuinely support the NHS.

The Union Jack is 415 years old through all its versions. Its history is pock-marked by mixed messages and differing concepts of which a key strand is a profound ambiguity, including the odd coupling of the desire to dominate adjacent countries while explaining their status in detail on a flag. The first use of the English flag or ‘ensign’ was almost exclusively to sign the national origin of ships and to decorate the shields of prominent soldiers while fighting. The St George’s cross and Scotland’s St Andrews’s cross were used by soldiers and mercenaries in the crusades of the 11th century onwards. Their intention was not just to identify but to signal a consolidated allegiance of aggression against Muslims, Jews and other non-Christians (the infidel). 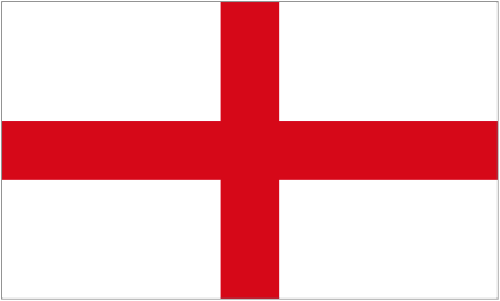 Great Britain’s earliest Union Jack was established in 1606 by the proclamation of James VI of Scotland, acting also as James I of England, the monarchical 2-in-1 approach making the political decision easy and without divisive musings about the nature of sovereignty. There was nothing popular about it, since the selection of both monarch and mandate was engineered by Elizabeth I’s advisers after her death to secure a Protestant succession. 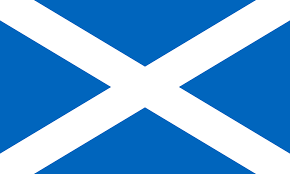 The Union with Scotland was simply depicted by integrating the St. Andrew’s cross in the St George’s cross – an easy design job since it took almost no imagination to create it, although the key decision was about which cross lay on top. The English decided that the English would dominate by design. 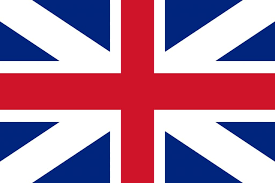 Ireland also had the same monarch as England, since the Irish Parliament passed the Crown of Ireland Act 1542, proclaiming King Henry VIII of England to be also the King of Ireland. In fact, since the 12th century, the English King had been, nominally, the overlord of Ireland, a papal possession.

In 1707, the kingdoms of England and Scotland were legally separate under one monarch but became formally united as a single Kingdom of Great Britain. 90 years later, despite its failure, the 1798 Irish Rebellion against British rule, inspired by the recent US Declaration of Independence and the French revolution was crushed by the British with bloody massacres all over the country causing up to 70,000 deaths. The British must have thought that the problem was over. But in a typically recurring sequence in British history the solution to the problem became its catalysis, although in the short term the British drive for political union between Great Britain and Ireland continued.

The 1801 Act of Union uniting the kingdoms of Great Britain and Ireland was again made politically easy by the single monarchy in common. The revised Union Jack was reconstructed to include the St Patrick’s cross. But this was perfidy. The cross was a handy logo politically and geometrically, based on the arms of the powerful pro-British Fitzgerald family and anyway, as the Flag Institute sniffily noted, St Patrick was not a martyr and therefore not entitled to a cross. The St Patrick’s cross is barely recognised in Ireland now and had only been the convenience flag of Ireland for just 18 years before 1801. Even then it was forced on the Irish by William III and his Protestant friends, so it was somewhat unlikely to become much of a nationalist stimulus for popular Irish allegiance. 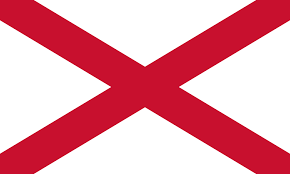 Wales was again left out of the Union Jack simply because no one in England thought about including it. The new flag was designed while ‘the principality’ was part of the Kingdom of England, so it didn’t count. The St. David’s cross, with its happy geometry and daffodil-yellow, might have been perfect for the Union Jack (see below and headline image), and should properly now be included in it. 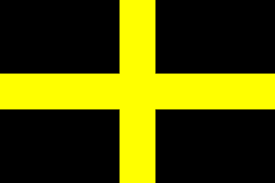 So the new Union Jack was born unsure, incomplete, unliked and uncertain about its future. A reflection of the insecurity was that although the flag appears symmetric, the widths of the white lines above and below the diagonal red are different. On the flagpole side (on the left on paper), the white lines above the diagonals are wider; and on the non-flagpole side (on the right on paper), they are narrower.

This makes no difference when the flag is rotated 180 degrees, but if mirrored the flag will be upside down. It’s a very easy mistake to make, and has been made on many international occasions, such as at the signing session of the UK’s formal accession to the European Economic Community.

The design anomaly exists because ambiguity and uncertainty of the heralds of the day. Desperate to reflect the Irish addition but careful also to keep the cross of St George as the dominating element over the crosses of St Patrick and St Andrew, a geometrical formula was adopted which preserved the total visibility of the St George’s cross; partially obscured the St Andrew’s cross; and completely offset the red diagonal St Patrick’s cross so that it was both obscured and its axes broken. Looked at it on its own, it was no longer a cross, but two axes which could not meet in the centre. The St David’s cross didn’t stand a chance..

It was explained in heraldic language thus: “The red saltire of St Patrick is offset such that it does not relegate the white saltire of St Andrew to a mere border. St Andrew’s saltire has the higher position at the hoist side with St Patrick’s saltire in the higher position on the opposite side”. Behold heraldic prejudice. I doubt whether the Irish representatives were given much choice on the asymmetric and shattered portrayal of their cross, but it’s likely that, powerless to act, they were past caring.

The Union Jack has always been little more than a cloth cover for profound national uncertainty and self-doubt. It is a flag of both imposition and insecurity, creating a mish-mash of mendacious foreign policy, unwilling consensus and passive aggression. The design is skewed, ugly and uncomfortable, but it accurately describes the plotless government and the Union as they now totter on the brink of break-up after centuries of bipolarity, discretion and deception. The Union of the United Kingdom took 400 years to bodge, bosh and bind together and the whole ambiguous structure is now collapsing visibly after just ten years of incompetent government by the Conservative and Unionist Party.

In the last two years this incompetence has been conflated by grand scale corruption, organised deception and financial profligacy. The failure to understand modern history has left the UK, holed below the plimsoll line and on fire, steaming forward, ensign flying, to a full scale national disaster and a massive memory loss on what to conserve for the future and what to consign to oblivion.

What then shall we do? Put out more flags? 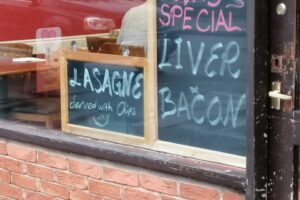