Ahem
Some weeks ago while in France, I was dragging an old double mattress out to the car, carelessly using the fingertips of my hands to pull it along the ground since it had no handles, when I suddenly lost all feeling in the top third of my left index finger, which promptly and rather comically drooped when I held it up in front of me. I felt no pain after the initial sharp twinge but used my droopy fingertip as a party act throughout our sailing holiday and for a while afterwards. However, I eventually realized that it wouldn’t heal on its own and I might need my left index fingertip for various purposes, for example learning the ukulele, so I went to the clinic to have it examined. The doctor recognized it immediately, telling me it was a mallet finger (a “baseball finger” in the US). But after two weeks using a loose splint bought from an Abidjan chemist, I needed to find something a bit more effective to rectify my index.
Fortunately for the finger, I was due very shortly in the consumer paradise that is the United States, specifically Des Moines, Iowa, to assist and witness the award of the World Food Prize to Dr Adesina during ten days of meetings on food and agriculture. I knew I could get exactly what I wanted there. It was my second visit to Des Moines, having been there with another President, Lord Plumb, 29 years ago, coincidentally at around the time that the World Food Prize was inaugurated. On the first full day after my late night arrival in Des Moines, it rained solidly, giving me good reason to use the city’s well-known Skywalk, a covered walkway at first floor level that links most of the central district. I Skywalked to a Wallgreens store and bought a well-fitting finger splint that will keep my droopy fingertip in its rightful place until it heals. Following my established habit in the US, I also bought several potions, pills and creams, some for conditions that I hadn’t realized I had, although I stayed clear of “Jock Itch Cream” and “Piles Relief Ointment”. I was even surprised my splint hadn’t been called a “Baseball Finger Correction Device”. I invited myself to dinner in the evening with my friend Jane (with whom I used to work) and her husband Kevin, who live in Johnston, a suburb of Des Moines, a stone’s throw from the worldwide headquarters of Dow Dupont (the original Iowan seeds company name of Pioneer having now been suppressed). After a hair-raising taxi ride in conditions approaching a giant Ophelian tropical undertow, I met Jane, Kevin, and family, whom I had last seen 12 years ago, and spent a very entertaining evening, including being treated to a coherent and insightful exposition of the torrid US healthcare insurance issue by Kevin, an insurance expert. I found myself beginning to understand the political dilemma that inevitably occurs in the absence of either compulsory health insurance, a national health service, or the consensus that either is a top legislative priority. On Sunday morning I caught the ebb of a local half marathon in thin sunlight, listened briefly to a live rock band uncomfortably called the Pork Tornadoes, and had a spaghetti at a junction with an unlimited salad bar, where I ordered beer and got cider. “Angry Orchard”, according to the waiter, was beer but just had a really strong taste of apples.

The World Food Prize is a big business in itself, and we made a full tour of the landmarks and sites of the life and career of homegrown Iowan Norman Borlaug, who has his own personal byline: the man who saved a billion lives. Borlaug is credited with the Green Revolution of the 1960s, a collective and concerted effort to modernise farming production, practices and inputs in India. He spent his last years trying to organise the same thing in Africa but died before he could make progress, bequeathing the job to Dr Adesina and other African shakers. The award ceremony took place in the impressive golden-domed State Capitol, which would not look out of place in Vienna or Rome. Dr Adesina was awarded the prize in a flummery of rococo protocol, bugles and tuxedo. The ceremony included a poetry reading from Dr Borlaug’s daughter, other award presentations to young farmers, breeders and scientists, songs from the Glee Club of Purdue University arrayed in tux (photo) under the startling neo-classical Iowa Westward, by Edwin H. Blashfield and the considerable Omawumi, 2007 runner up in West African Pop Idol 2007. There were video tributes, messages and testimonials galore, and some irresistible dance music from a Nigerian band, which got Dr Adesina, his wife, and former Nigerian President, 80-year old Dr Obasanjo, up and moving to the exuberant highlife echoing between the marble columns and plush wooden panels. A posh dinner for 400 in the rotunda wrapped it up before the coaches took us all back to our hotels. 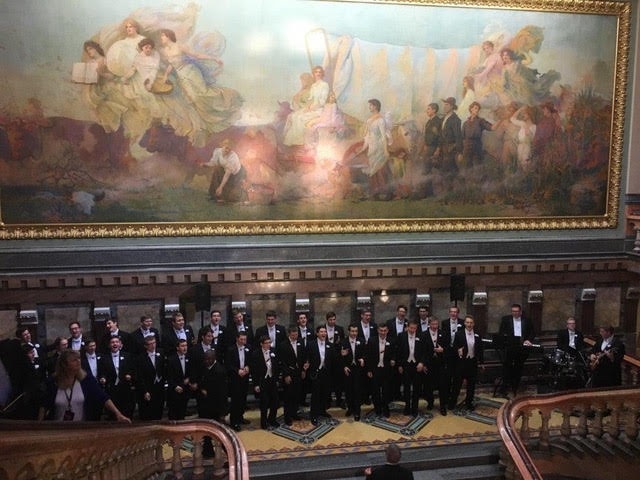 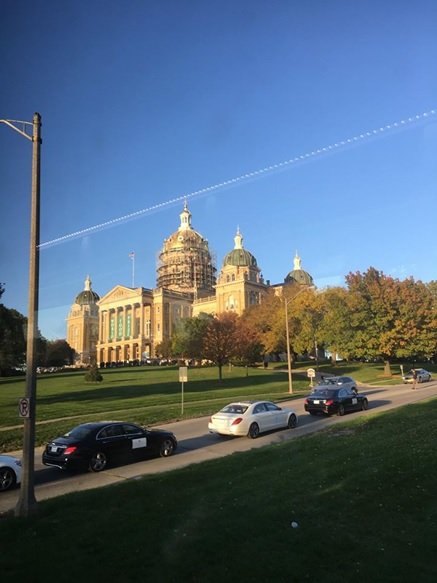 In the swirl of stock international horror about the current US President, it can be overlooked that the overwhelming majority of modern Americans are genuinely kind, very polite and friendly people, intensely interested in visitors, strangers and their stories, a theme endorsed by an old friend in his new book In Search of Nice Americans. Meanwhile through the week, I finished every evening in my room transfixed by the increasingly bizarre soap opera at 1600 Pennsylvania Avenue. Central Des Moines, however, has a dearth of general stores and shops. I spent at least two hours one Saturday afternoon trying to buy an envelope. Several locals didn’t know where the Post Office was (one asked Siri, who didn’t know either). People knew the FedEx store, which couldn’t sell me an envelope but did give me one. I then couldn’t find anywhere to buy stamps until the hotel also gave me one. After that I couldn’t find a post box, and again no one knew know where one was. It was during this querulous and quixotic quest that I tripped on a paving stone and went flying to ground. I got up gingerly, with a heavy throbbing in my chest where I must have prodded myself sharply with a pen as I hit the pavement.
Talking of health, I spent a couple of days in Abidjan thinking I might have contracted malaria. I went for a test at the company clinic, citing cold sweats, shivering, sleeplessness, headaches and a feverish brow, in fact all the symptoms except a temperature. The test was negative but my colleagues told me not to believe it, and that I should take a second opinion. I decided to wait and see. The threat diminished slowly thereafter but left me exhausted and delicate all week and with a major stomach upset. Mohamed brought me a herbal concoction which he said would wash it out. It came in a large stoppered tequila bottle whose label briefly excited me, but I soon realized that its contents were not as indicated.
Nurse!
Lionel

There is a demolition going on, hardly reported by the[...]