Ahem
Sailing and I have never been close. My brother was the sailor of the family, while I stuck to cross channel ferries and the odd canoe. But the faint call of the marine had been more recently amplified by a friend’s tales of calm transparent lagoons, wide vistas and sunsets with lighthouses, welcoming bays and easy-gliding yachts slipping soundlessly into comfortable harbours. Our friends Dawn and Andy came with us for a week of sailing in the Adriatic, and with a friend of mine from Basel days, Edith, now living in Pula, as our skipper. We first spent a couple of days looking around the marvels of Pula – largely the classical buildings of the Romans, including the Arena, the sixth largest amphitheatre in the world, the Temple of Augustus, built in the first century AD, the Kastel on top of the hill, and the Sacred Hearts Museum, where I closely inspected an interesting exhibition entitled The Bird in the Bush: the covered and the exposed in Istria’s sexuality. We also had a delicious fresh fish lunch together under cover from the pouring rain on a terrace overlooking the marketplace. We joined the yacht, the Jonathan Silver, on the morning after a sudden and gigantic flash-storm of tropical dimensions washed us all out of a bar near our B&B in the centre of Pula. We had to delay our start for a day because of sharp headwinds better suited to North Sea Olympic trials than leisurely excursions and a wind apparently known locally as the “summer-killer”. We spent that day with Patrizia, an old friend of Edith’s, at her house in Pula, where we received spontaneous and unstinting hospitality for most of the day. Patrizia’s house is designed for four pugs and an arrogant cat. Humans have to negotiate their way around the dography of the house while the pugs watch and scheme from their cover of woebegone expressions. On a rain-swept afternoon we all had not one but two meals with wines, liqueurs, grappas and beer, scarcely without leaving the table, but as soon as one of us did vacate a chair, a pug would stealthily climb into it, maintaining its unblinking face of watchfulness and infinite douleur. Patrizia is one of the world’s great welcomers. But the mops (pugs) were somewhat disconcerting. 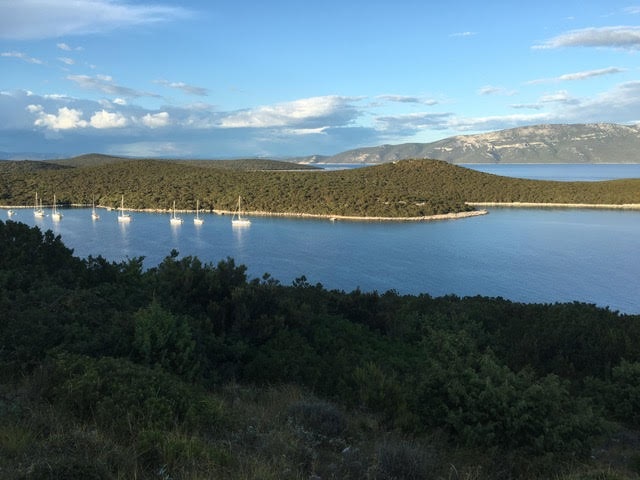 Ahem While the girls have enjoyed some time in England[...]