The first of my Get Writing “MeetUps” in Basel, intended to inspire local writers in English, was attended by a dozen people, which wasn’t bad for a dark and stormy night in Kleinbasel. Some of them read out their work and others discussed it. We talked about grammar and certain writing techniques. Once again the blind law of creativity asserted itself: most people are naturally creative and just need more encouragement. I went to a small town in Germany, Waldshut, to support a creative writers’ group there. Despite having lived close to the German border for over ten years, I realized that I have not crossed it much, apart from short visits to Lorrach or Weil am Rhein: suburbs of Basel; or occasionally into the Schwarzwald, and to Freiburg (and some weekends in Berlin).

I did cross into Germany again on a visit to Brussels and stayed with Clive and Julia, also meeting friends and business contacts for a couple of days. At YuMe, a tidy Asian fusion restaurant, I had arrived smartly for lunch with Dominic at Swiss time (1200), but not Brussels time (1300). So I spent an hour on emails, sipping a fine white in the high glare of the low lying February sun, which suffused the room through unrelenting French windows. The warmth of the afternoon disputed the weather of my visit overall: drizzle, biting winds and churning wipers in long traffic jams inching past inexplicable road repairs looking like broken carnival floats. Talking of carnivals, my visit coincided with the three-day Basel Fastnacht. I came back to Basel in the late evening of the third day via a workmanlike lunch with a friend at the Chateau de Betzdorf in Luxembourg. Post-carnival Basel seemed like a ghost town, with the full clean-up already in motion: psychotic street-cleaning buggies hoovering the knee deep debris and deflated floats being tractored away in the gathering darkness to rest in forgotten rural lay-byes.

I went to hear the Malian singer Rokia Traore in concert in Zurich, and, anxious to get my car parked safely and under cover in a torrential thunderstorm, got stuck in a concrete no man’s land between the entry and the gates at the bottom to the hotel park. This was because I decided rather late that on the whole I didn’t want to pay €50 for hotel parking (having paid less than that for the concert ticket). I cast myself on the good nature of the hotel receptionist who let me park there gratis if I bought a drink at the bar, an incentive that I was very happy to accept.

Gwen came over to see us for a few days from Brighton, getting quickly into full relaxation mode, and showing us again how to access Netflix, thereby getting us into addictive American serials such as “How to be a Murderer”. Alli and Gwen formed a kind of sisterly double act during the week, together watching TV, Netflix, baking cakes, cooking, taking turns walking the dogs and generally shooting the breeze while I hoed my lonely row upstairs. Alli and I have also been watching a lot of detective films on TV: mostly re-runs of Midsomer Murders, Lewis, and Endeavour. On a more energetic note, I went on another Marche Populaire in and around Feldbach and Bisel, walking over 12 kilometers through muddy woods and fields with the Jarvises, Barneses and dogs. Alli has been suffering unfairly with this year’s edition of gastro-enteritis, which led her to miss the walk and us to miss going to a Valentine’s Day dinner. It been a late decision, and I went off to ask for and obtain dinner for two as a take-away from L’Ange in Leymen. We fulfilled the date later at the new village restaurant, Le Landskron. On the last day of the month, I visited the modish 800° in Basel with Paul and returned lighter of pocket, remembering too late about the need to avoid eateries close to the lumpish Messeplatz.

I went with neighbour Ginelle and her son Linden to a Guignol show in the village, with some adults and more kids watching a show broadly similar to Punch and Judy, with the domestic violence, cops, robbers, magic books and poltergeist mushrooms. Linden was a bit too young to appreciate the complex socio-cultural overtones of the occasion, but when he left at half time with his mother, my cover was blown as I had no toddler to point to as mine. I needn’t have worried. There was an old man at the back smelling vaguely of old clothes and sawdust who excitedly joined the toddlers’ joyous chorus of catcalls, shouting out “Non” or “Oui” or the equivalent of “Look behind you!” and “Go away, you nasty robber” complete with expletive suffixes. The narrative was disturbed at one point when the kids decided that they actually liked and approved of the nasty robber, so they started shouting the wrong responses, thus derailing the plot for a while until the MC patiently extemporized. “But you don’t like the nasty robber do you? He steals your sweets and beats up your mates, so surely not?” A disappointed children’s chorus intoned a grudging “Non”. 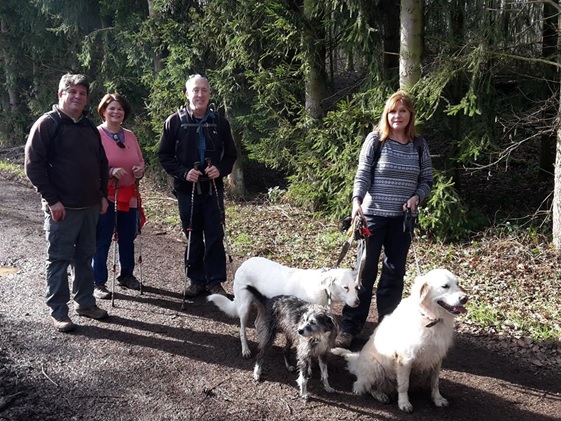 We had a dinner party at the end of the month, inviting some friends to join us for Alli’s smoked oyster dip, pumpkin and chestnut soup with crispy pancetta, coquilles St Jacques, civet de chevreuil, celeriac potato mash, and orange and Oreo cheesecake with an aperol prosecco topping. I contributed by serving the wine faithfully but erratically like an arthritic and forgetful family servant. Earlier the same day I had been to a village meeting to discuss how to improve local amenities and activities. The meeting was ably facilitated by Kirsten, the energetic British local councilor, whose careful French was good enough both for the locals and the serried ranks of press-ganged expatriates in the audience. The ruddy-cheeked Mayor, who gave a short speech of welcome, was delighted to be addressing so many potential new village volunteers, and left with a smile and a jaunty step as we formed into breakout groups and eyed the bottles of warm white wine in the corner.

Yours from the vespers,

Ahem April has been described as the cruellest month and[...]

“Portmanteau” words pack two meanings into one word by taking[...]

Ahem, We have spent much of the month closing in[...]