The month of Janus, the god of beginning, transition, doorways and archways, was typically two faced, making the blue skies of Christmas disappear, then ushering them in again four weeks later; promising ski-friendly snow then slushing it away almost as soon as it settled down; providing evenings of gentle calm and limpid quiet, then lurching us all into rough buffets of angry gusting rafales. Not one generic type of weather properly tucked in its feet; there were dry, crisp and frozen mornings, and there were also afternoons of clunking buckets of rain, relentless in swathes, wraiths and waves. We didn’t know if we were coming or going, or if we had had our winter’s prescription already, or if a really cold and blue-nosed spell was still to come. Over the last weekend the wind huffed huffily and tried to blow our house away.

In the first days of the month, Jessie had a final English week of intensive socialising and Gwen left us to return to school in Brighton. Together with Ella, who went back to work in London, they spent what weekends they could in Sussex with their doting grandparents, who were as pleased to see them as they were to visit them. I resumed my efforts to make the most of the Basel area and went to a few concerts in the city and nearby, including a musical evening to celebrate Mozart’s birthday, and to the Dreikonigskonzert in Kleinkems, close to Basel, where the Ensemble Erzsebet played various pieces by Ravel: the Klaviertrio, the Chansons Madécasses and Cinq melodies populaires grecques. The pieces were modern, expressive, surprising, and creative. The village that hosted it was none of these, but accommodating nevertheless.

I also went to the Basel paper mill museum to hear different members of the Basel Symphony Orchestra play a programme of music by J. D. Zelenka and texts by Stefan Zweig called “Homo Eroticus und Kirchen-Compositeur”, presented by Christian Sutter, a wizened old man with a long beard and twinkly eyes who spent much of the evening twanging and sawing behind his double bass. I understood very little of the long readings but the audience found it all very amusing and even naughty. All I possess by Zweig is his biography of Marie Antoinette. An Austrian and Jewish, he escaped his country, took British nationality but lived mostly in New York. He was in despair about the future of Europe and its culture, and committed suicide in Brazil in 1942. Unjustly, he was never considered to be the intellectual equal of contemporaries such as Thomas Mann and Joseph Roth, but he sold a lot more books than they did, and was one of the world’s most popular writers in the 1920s.

I stepped up my business networking and went to a business lunch in Basel’s Volkshaus, and a training session about corporate business leadership and the brain in the Markthalle. I was interested to hear that there might be a connection. It was an interesting evening, and I enjoyed the gentle chiaroscuro, the evening shadows, lamplight and the gentle undertow of conversation giving the cavernous hall the relaxed characteristics of an African night market. I have also started a Basel group on creative writing which I will be hosting as good practice for my own ambition to write more; our first meeting will be early in February (those locals interested in coming please let me know).

Alli and I went to an imaginative and friendly party celebrating the New Year, then already some days old, with Sjoukje and Richard in their house in the Bruderholz. The party featured an entertaining and ambulatory quiz, in which the randomly selected groups answered some tough general knowledge questions while touring the many rooms of the mansion. We have also been out with the Jarvises and Barneses, with lunch on a rainy Saturday at L’Ange and dinner the following week in Bartenheim, a five star meal at Le Colombier. This was after a day’s walking up and down the Canal de Huningue from Kembs, during which we saw what we thought were beavers, but they had the tails of water rats. They ate shrubbery from the banks but were not building any dams. They were slow on land but sleek and fast in the water. After more research and examining the photos, we think they were coypus, but are happy to be corrected. We also inspected a famous example of the architecture of Le Corbusier – the sluice at Kembs-Niffer (see pic). 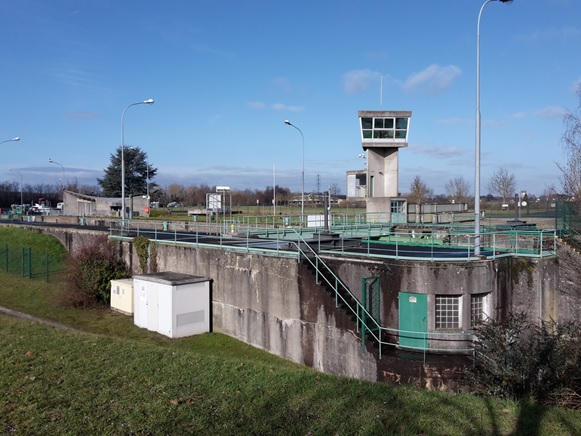 Two weeks later we went on a Marche Populaire in and around the beguiling village of Riquewihr, also picking up some of our favourite Pinot Blanc and Cremant d’Alsace from the folk at Domaine Meyer in Hattstadt on the way back. Yet again Madame Meyer hesitated to let us in as she was “going to the hairdressers” but agreed when she recognised us and saw the euros approaching the coffers. In the evening we went to a very enjoyable and entertaining dinner party hosted by the Barneses that featured excellent food, cheese, company and discussion and finished with dancing to the latest grooves.

Alli and I spent a convivial evening talking with Andrew and Niamh-Ann over dinner about Leymen’s local politics: the scandals, court cases, imbroglios, portents and pork barrels. Municipal Leymen provides all I need to satisfy my fast disappearing urge for political engagement, but I have joined the Association Pro-Landskron, which seeks to conserve and improve the remains of the Chateau Landskron, the landmark ruin that oversees the Leimenthal. I hope to be accepted as an official guide to this fine and under-rated historical monument. And Leymen has a new and appropriately-named restaurant, the Landskron, the fourth in a village of 1200 people, and I had lunch there with my friend Philip. I also joined Martin and Jane for an apéro in Basel after an afternoon scouting for offices, and took some advice from a friend to help me understand my computer better. Finally, I also put up one of my gifts from the girls at Christmas, the metallic sign ‘Wolfsloch’, on the front wall of our house by the door to christen our house properly after six years of being plain No.13.

Yours from the lair,

Ahem I miss not having a proper bonfire night, and[...]

Ahem My efforts to cycle more regularly to work were[...]