After our carrousel Christmas, the New Year started quietly and modestly. Jessie and I got our heads down for our respective workloads, and we committed to severe diets (mine to lose weight, and Jessie to veganism for “vegan-uary”). Gwen was delighted to have her friend Hannah from Holland to stay for a couple of days, and Ella returned to Loughborough on New Year’s Eve to join Sam. Jessie went back to the UK to sit an exam then returned for a week, and continued her diet throughout the month, doing a lot of new and innovative cooking in the meantime, and turning our kitchen into a vegan paradise. One evening we had a vegan feast and invited LeAnn to join us in sharing baba ganoush, flatbread, tabouleh salad with pomegranate seeds, pumpkin and spinach puff pastry rolls and courgette fritters. She also did some tidying of our CD, TV and games shelves, as well as some overdue cataloguing of our family videos, which record at least ten years in the life of our family between 1992 and 2002. At short notice we had our once-removed-cousin Glenn to stay with us while he was waiting for a visa to go back to Russia, where he works as a “manny”, looking after children. Glenn was helpful around the house, walked Bonnie several times, and was a regular and willing washer of dishes. I set aside his youthful enthusiasm for the Arsenal: there are worse teams to follow. We were even sorry to see him go when his visa arrived. Larissa and her children, friends from several years ago when we lived in Oberwil, also visited from New Zealand and stayed for a few days, seeing other friends in Basel. 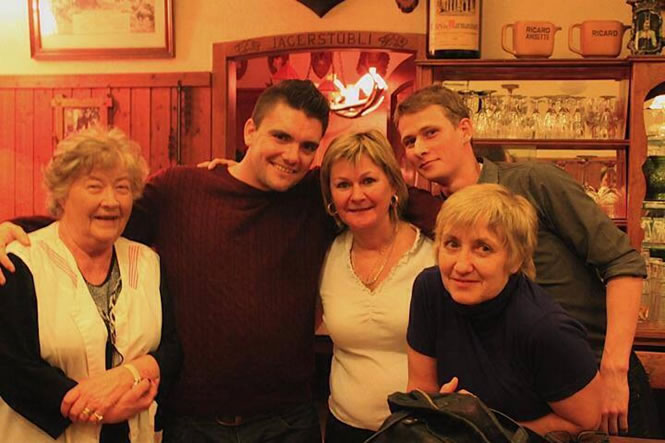 The two social groups that I help to run were active this month. EnglishSwissTalk (“where Basel gets sociable”) had a New Year apéro that I attended but left primly at 10pm. Alli, on behalf of The French Letter (a newsletter about local events in the French border areas), organized a “Hunters’ Dinner” for nearly 50 friends and neighbors at the Au Chasseur, near the Chateau de Landskron, which specializes in fresh game dishes. In the middle of my badly-timed vegetarian phases, I had a manly mushroom vol-au-vent and drank fizzy water all night. And everyone else started behaving strangely after about 10pm. I went to England for a few days with Alli, Gwen and Jessie, leaving early on a Saturday morning, and driving a hired car to East Ham. In the afternoon I was expecting to witness the Mighty Hammers humble the Toon at the Fortress Boleyn; a couple of Toon supporters (Brian and Paul) had even been summoned from Basel to witness the collapse of their team. Tragically the game did not work out like that, and the magpies edged an disappointing game 3-1. Alli, Gwen, Jessie and Ella (who came down to London from Loughborough for the weekend) more sensibly went shopping at the Westfield nearby. We all met together again in the evening with several others (including Sam & Tom, Brian’s daughter Claire, and John & Jan) at a very good Indian restaurant nearby. 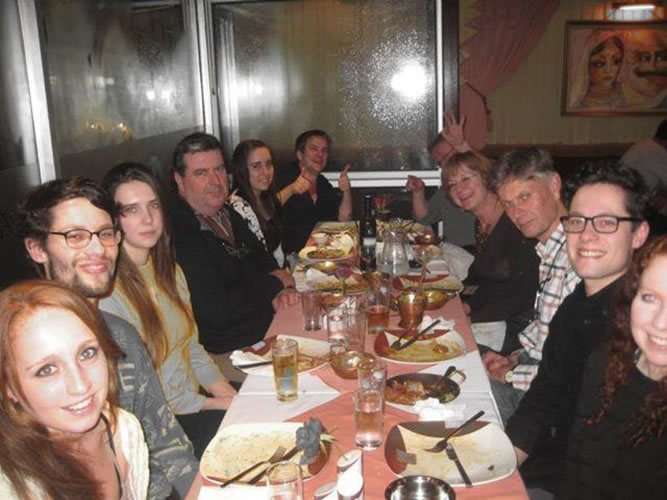 After the departure of the girls and Basel’s Toon Army, my fortunes improved as I met good friends and business contacts in London, staying with Debbie in Battersea and in Peckham with Charmian, a school-friend from the 1970s. Charmian’s knowledge of the gossip about the school while and since I was a cherubic schoolboy made me realize that my father may have been right to worry about my moral welfare as a weekly boarder at Westminster School from 1970 to 1974. Peckham has changed a lot, as far as I can remember from about the same era. Parts of it put me in mind of the night markets in Northern Nigeria. Except the weather. We went to an edgy local restaurant which had been basking in rave reviews, but which turned out to be the interior of a poky house designed as a portakabin, next to a flapping tarpaulin in the front yard, covering a broken barbecue. The toilet door was wide open onto the dining area, and dirty dishes and glasses piled up on the table next to us as we waited. There were mutual glances of despair, a kind of prise d’otage, among the other unfortunate diners, as the nice-but-dim waitresses wandered around forgetting orders and apologising. We drummed our fingers during a near two-hour wait for a main course that I mistook for the amuse-gueule (the starter having been the size of just one petit-four). The owner, we felt, was purloining the Michael. And Jonathan Swift scribbled at the corner table as I observed the Peckham chatterati struggle to square their experience of the place with the breathless Fay Maschler review. I later went to Luxembourg on another business visit, staying with the Miles Sorensens, and came back hooked on the drug that is Breaking Bad, but also well satisfied with the meetings.

The subject of burglary has been much discussed in the highways and byways of the border area. Several houses have been burgled or broken into in the immediate vicinity and elsewhere in the village (and other border villages). Everyone blames East Europeans or Alsatian gypsies. Many residents are muttering about shotguns or spending large on security. Unsure what to do, we encourage Bonnie to think of herself as both guardian and chief barker, and contemplate also getting another dog. I have started doing my professional writing work in an office in Basel, a move that has significantly increased productivity. I go in by car most mornings, but I will be pedalling to and fro once again in warmer weather. However, it will get colder before it gets warmer, and the heater in the car is on the blink, so I am wearing my new pullovers to counter the morning horripilation.

With a heavy shake of the hoary locks,

Ahem After such a long Christmas holiday break, going back[...]