There was a rare and immediately memorable Stanbrook family gathering this month in London with most of the living Stanbrook family in attendance, namely my brother Clive, sister-in-law Julia and all their children and grandchildren, with Alli and me, Jessie, Ella and Gwen, cousins Diane and Brendan and assorted related cousins, nieces and nephews. We were all attending the christening of the newest arrival, son of my niece Sophie and her partner Simone, Elio Clive, baptised in the Temple Church, with Whit Sunday Choral Mattins afterwards and a brilliant, heart-stopping rendition of the Sortie from Messiaen’s Pentecost Mass on the organ, then a big rambling collective multi-course Italian lunch at Il Bianco in Northumberland Avenue. 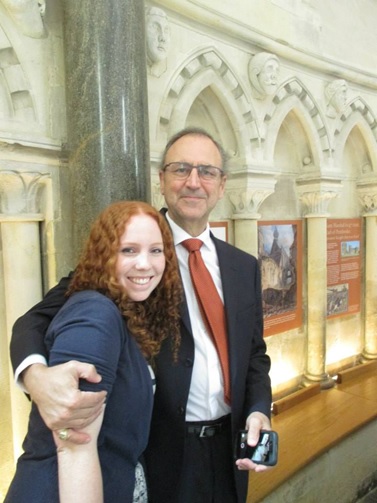 It was great to see them (us) all together, looking well or better and healthy after episodes of bumps, mumps, cuts and bruises. It was also a pleasure to see the increasing Italian part of the family again, bringing style, previously understated at best, at least to the male minority of the clan. 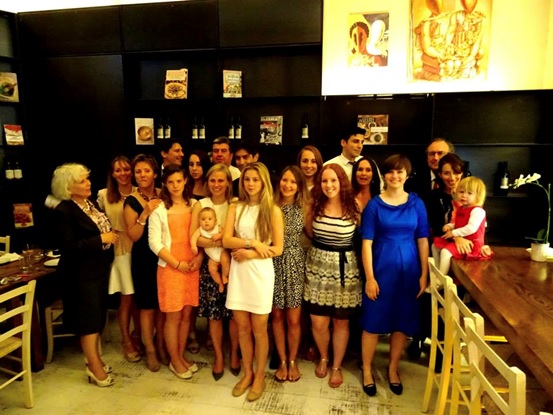 We had flown over from Basel the previous day, travelled from Gatwick to Victoria, where Ella met us and walked with us back to her flat in Millbank where she lives with Sam. Jessie had arrived from Dhaka the previous evening, having come over especially for the reunion, and was able to catch up with some of her friends the next day. During Saturday afternoon, while Jessie, Ella and Gwen were meeting their cousins, I took a walk around the Turners, Constables, Blakes and pre-Raphaelites in the Tate Britain, practically next door to the flat, before rejoining everyone plus Sam for a long awaited Indian takeaway and the ever bathetic annual Eurovision Song Contest on the telly. We stayed on Sunday night with Laurie and Kay, before taking the early morning flight back to Basel on Monday.

Earlier in the month, I went with Martin to the TriRhenum Symphony Orchestra concert in the beautiful Martinskirche, the oldest church in Basel. Although we missed a few minutes at the start, we enjoyed a programme featuring Vaughan Williams’s Fantasia on a Theme by Thomas Tallis and Dvorak’s 8th “English” Symphony. A bleak sequence of windy and unpredictable weather threatened my vegetable plants so I kept many inside the greenhouse until the end of the month, but I have now planted out Pak Choi and Brussels sprouts, spinach, lettuce, beetroot and beans. I created another plot to add to the others created for the potatoes and beans. Another plot is given over to American corn, shared with our friends the Barneses. We had, very unusually, two Wednesday night dinner parties, one with our temporary neighbours Brian and Pat, who are about to go back to England, and another when Jessie, on a flying visit to see us directly after the christening, invited her friends James and Sophie over for the evening. Jessie returned to Dhaka after a couple of days with us during which she was suffering from a severe cold. Shortly afterwards, Alli and I completed another very enjoyable Marche Populaire, this time around Riedersheim, with Dawn and Andy.

The indomitable Gwen, determined to raise money for the Change for Animals charity, went on a very long sponsored bike ride, a 75 kilometre route, plotted on a 20k radius around Basel. The route crossed the borders of three countries twice each, two dams across theRhein, one dam across the Birs, and from beautiful green paths through fields of spring flowers to dank industrial waste areas. It also included nearly 40 kilometres of smooth towpath cycling, several little known highways and byways, and an almost entirely green route for the last 20 kilometres. The money Gwen raised was loudly commended on the front page of the Change for Animals charity’s online newsletter. 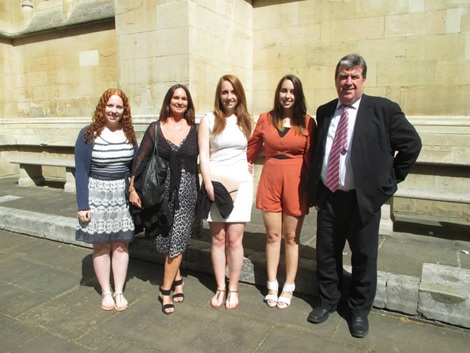 Our Belgian friends (Claude, Laurence, Sophie, Alexis and Anne) stayed for the first long weekend of May. The day they came was warm and sunny, allowing us to have one of our first swims of the year. On the Saturday we drove to Freiburg, where we wandered around the medieval central area in the sunshine, looking at the flower, fruit and vegetable market and the excellent shops, stopping for Wienerschnitzel and beer at the Martinsbrauerei, the oldest drinking house in the city. Some then went shopping; others climbed the tower of Freiburg cathedral to look out over the Rhein Valley, although the view was somewhat obscured by scaffolding.

I had another visit to Rome to discuss some work and flew into Fiumicino a few days after a fire had broken out in the commercial section of one of the terminals: a faint scent of burnt plastic materials remained but the fire made a mess of the timetable and there were delays to every plane going in and out. I stayed with Fionnuala, her mother and daughter Evelyn, and spent a day and a half working in the potential client’s offices. This time I did not venture into the city itself, but after work Fionnuala and I went to Trevignano and had a pleasant drink sitting in the late afternoon sun by the side of the famously volcanic Lago di Bracciano, which was troubled and choppy, but not really volcanic.

Yours from under it,

Ahem I have been gazing out across a moist flower-bordered[...]

Ahem I divided the month of July between working in[...]