The uncertain winter continues. Every morning there is uncertainty about whether the mist will clear from the hills long enough for us to see the Landskron Castle; whether the ice on the car windows will need to be sprayed, scraped or hot water splashed; whether to wear a heavy coat or a very heavy coat. There is no indication, least of all from online predictions, that the day itself is going to be cold and/or sunny, or cold and/or raining or just cold and grey. Snow is elsewhere but rumours of snow abound. And yet the majority of afternoons this month have been sunlit with deep blue skies. We don’t get all the news we need from the weather report and inch forward to the Spring by taking draughts of summer breath.

We have another dog. We call him Max but his real name is Mouxi. Max is a snowy powerful gangly rangy three year-old mongrel with traces of Labrador and Greyhound. He was rescued from a field in Romania where he had been attacked and left for dead (by a human being). Fearful, timorous, continuously ravenous from a short lifetime of scrapping, scrounging and scavenging, he is now improving in leaps and bounds. What he might not yet realise is that we want him, in extremis, to pay back the treatment he received as a puppy and attack human beings (if not actually leave them for dead), if they dare to enter our house with malicious intent. So far, Bonnie is happy with her new friend. In generous sharing mode, she is already leading him astray on unauthorised sorties across the fields and into the woods. When Max runs – really runs – for example when chasing flapping storks and crows – the ground itself seems to shake. 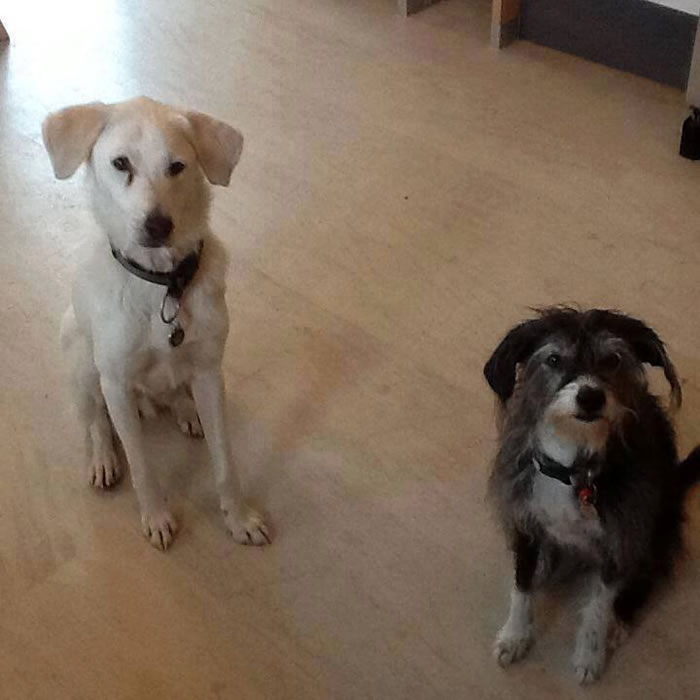 The social group EnglishSwissTalk held a very successful fondue in Basel. A well-made fondue is a beguiling offer: while I just about stopped myself from over-eating, my mixed salad did not compare to the few molten mouthfuls I had of the glorious Swiss national dish. I had also prepared a quick quiz on English and Swiss general knowledge. However, there is no quiz yet devised, however thoroughly researched and pressure-tested for those who are pernickety (“persnickety” in American), or of a stickling or cavilling temperament, that will be unchallenged as to the answers, plug-obvious as they may be. Thus, complaints from the floor after the Revelations included the proposition that, strictly speaking, Switzerland did not have a President, least of all Didier Burkhalter; that, strictly speaking, Johnny Hallyday did not live in Switzerland, even officially; and that, strictly speaking, the Rütli was not a meadow but a small lawn by the Lake Vierwald. The winners (pictured) took a bottle of wine and two free tickets to a subsequent International Comedy Club event in Basel. 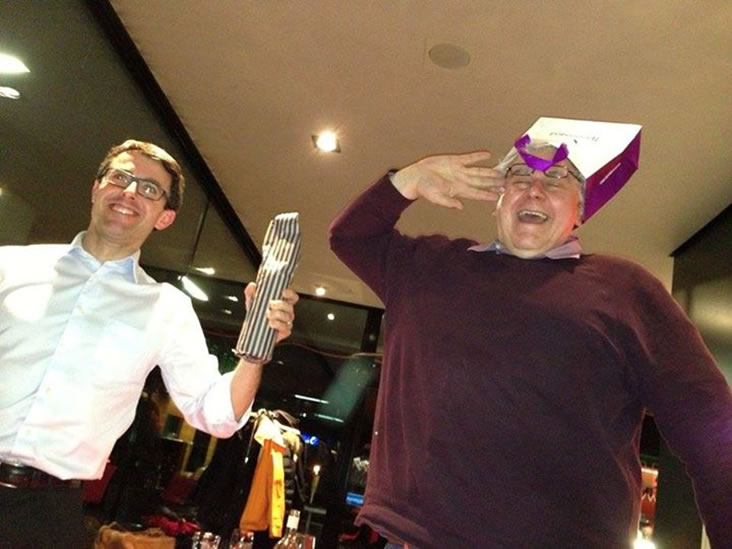 I am back on my bike again after a break of over two years since an accident on the ice tore away ligaments in my knees, and a great feeling it is too. Regular daily commuting to and from Basel may have to await better weather next month, but a Sunday bike ride to Rheinfelden and back along the Rhein with Andy cleared the cobwebs and got muscles moving again. I also rediscovered the pain of being “saddle sore”. The following weekend I found the glories of the Bruderholz for long distance cycling, and managed to cycle non-stop from the water tower through fields, woods and country paths to the village of Therwil.

Jessie got excellent results, equivalent to a good 2.1, in her exam on issues in criminal law and criminal justice, and is now well on the way to completing her postgraduate studies (Masters) in criminal law. She stood for the University post of Events Coordinator and was edged out by the Occupy/Left/Gay caucus in a vote of Sussex University students. Undaunted by a recent foot injury and by election canvassing duties, she also ran a half marathon in Brighton, raising money from generous donor friends for the Bangladeshi charity Meider Jono Asha. (see www.mjasha.org.uk/ and www.etsy.com/uk/shop/AshaHopeForLife. Ella is doing some serious running practice, as she too will be in a half marathon in Loughborough next month. She continues to edit the university student magazine, Label, and got a first in a recent final year exam that puts her in a great position for her degree in International Relations.

Gwen has moved from being a vegetarian-with-fish to being an all-out vegan and is cooking much more often. Ali has been (somewhat grudgingly) vegetarian all month but we are all getting used to meatless meals. I went with Gwen and friends to see the excellent Bombay Bicycle Club; unique, stylish music played confidently and professionally in a very crowded and noisy Zurich beer hall. Alli and I dined with friends in Metzerlen at the Kreuz, a Swiss restaurant that had been in the same family for 257 years. This long tradition was evident in the food, which was cooked for the traditional Swiss culinary taste. We also had a delicious dinner amidst great company and laughter at the Morrises, on the eve of Leymen’s Fastnacht, which left the village strewn with debris at longshadow sundown. 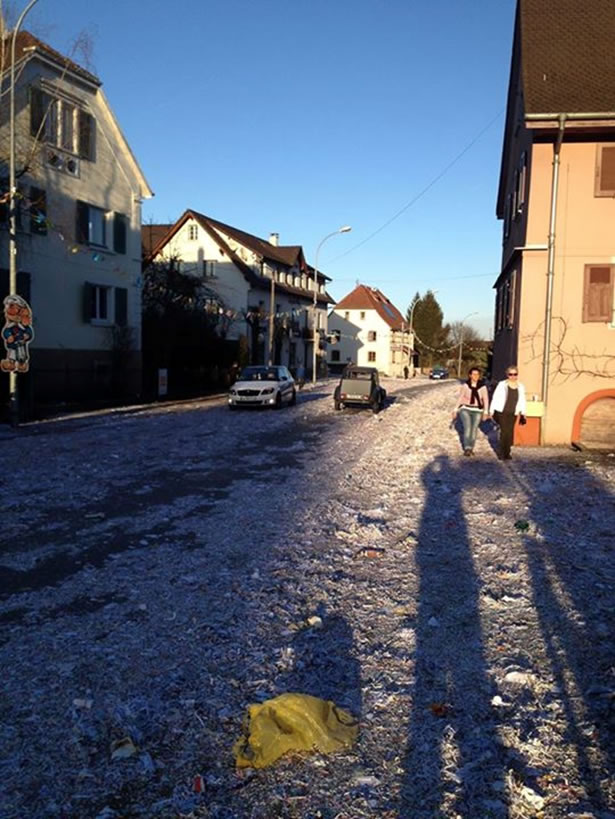 Leymen after the Fastnacht, February 2014

I went to an extraordinary concert one evening near to my temporary office in the University area of Basel to listen to two brilliant piano players, Geza Kulhay and Elia Macionetti, play together spontaneously. It was a “blind date” concert – the players, who played what seemed to be a full prepared program of an hour’s music together on one and on two separate pianos, met each other for the first time when they went onstage together that evening. It was a scarcely believable achievement in spontaneous and improvised but somehow utterly coordinated playing.

Yours by the light,

Ahem The colors of this year’s Fall together with four[...]