Ahem
Taking advantage of Jessie’s European stay following her London Marathon efforts last month, Alli and I flew to Porto for a short holiday and to leave the dank Alsatian spring mists. Jessie and Ella arrived separately, and we met up at a well-equipped apartment in the Avenida dos Aliados. Gwen couldn’t come because she was at school, and Alli and I are not of the cut-school-for-family-holidays-persuasion. The next three days were full and varied, and our many different interests were well accommodated. We ate well, and the astonishing meal at Il Paparico, one of the best restaurants in Porto, was a real highlight. It was also the annual celebration of the Queima das Fitas, the week-long festive street and processional party of students celebrating their new freshman status with those already at University and those about to leave it. It was colourful, joyful, musical and loud, especially as seen and heard from our balcony. We did a lot of walking and sightseeing around the central historical area, and went on two tours and tastings at port wine establishments. The best of these was at Taylors, where I had gone with my parents 35 years previously. On that occasion, the Taylor family had kindly and spontaneously invited us to lunch after my father signed the visitors’ book with the casually deliberate suffix of “MP”. I mentioned this to the receptionist at the spanking new visitors’ centre. He smiled indulgently but did not repeat the invitation, although it was nearly lunchtime. I could even see the wisteria-decorated terrace across the garden where we had lunched all those years ago. 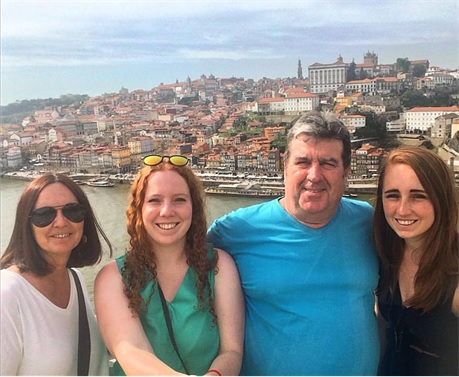 I went to Brazzaville in the Congo to talk about doing some work for an international organization. The journey there was dramatic to say the least. There were huge delays even getting into Paris – CDG airport due to security measures, and although I was already checked in, I still needed to get my bags into the hold. After fighting my way through the crowds, I was told that I was too late to check them in, and that I couldn’t board the plane, although the plane’s departure was still 90 minutes away. The queue to the passport check snaked through most of the terminal and looked like something from a Hieronymus Bosch nightmare. I decided to ignore the official advice, repack on the hoof by transferring everything I needed from my big case into my overnight case, join the humungous human queue, and try to get to the terminal gate without having a heart attack in the hope that the plane would be severely delayed in taking off. I was in control of all except the last of these objectives. Of all the tall orders I have ever engaged in, this seemed at the time to be the most ludicrous. I turned my large case, now empty except my bulky shoes and trainers, into airport jetsam, stowing it under a bench while forgetting that I was in a maniacally sensitive security minefield, and somehow managed to stuff and squeeze everything else into my overnight case, which almost burst as a result. An excruciating 90 minutes of tense shuffling later I showed my passport, sprinted to the gate at the other end of the terminal and arrived sounding like an overloaded washing machine in its final cycle. The plane had waited. Almost crying with joy, I bounded up the stairs to the plane and collapsed into the welcoming arms of the flight attendant.
It took almost the whole flight to restore my equanimity, and it was a bad idea to watch The Revenant during the flight, but further drama lay ahead. I had no visa and no yellow fever inoculation (the last having expired a few months ago), but when I arrived at a sweaty, steamy Maya-Maya airport I simply but firmly murmured “diplomat” while brushing past the health official. I obtained the visa post hoc with a contribution of 40 euros and was soon in a rickety bus making an uneven passage out of the airport into the Brazzaville night and its market hubbub, hawkers and barkers, to sounds of goats, chickens and babies, and smells of baked dust, wood smoke, burnt river fish and fried plantain. The meetings went well and I even managed to get out with some fellow visitors to sample the markets further and inspect local sites of interest, including the modernist St Anne’s Basilica, the Nabemba Tower, and the Poto-Poto School of Painting. I brought back some small wood carvings and a Congolese danshiki. The hotel was on the bank of the Congo River, which was swollen, swirling and muddy. What seemed to be a river-wide waterfall just upstream was in fact a badly functioning dam with murky brown flood water cascading over the top. I did manage to get a yellow fever inoculation while there to avoid being sent into quarantine back in France (stranger things have happened). Five days later I was back in cloudy Alsace after a delayed journey via strike-hit Paris.
Jasper and I went on an excellent Marche Populaire with Max and Bonnie in Frahier, Comté de la Marche, a little further away than usual, but certainly a walk worth the walking. At the end of the month, I joined Jasper, Dawn and Andy with Max and Bonnie for another Marche around the Alsatian wine production village of Orschwihr amongst woodlands, fields and vines, on a hot and clear blue day. We finished with a lunch at the Caveau d’Orschwihr, and happened to pick up some boxes of Riesling on the way home. Gwen arrived for three weeks, part of which was spent visiting Venice with Alli, a surprise and a consolation for her after not having come to Porto. The news about Venice was supposed to be a secret but it didn’t last long due to our ubiquitous access to online media. 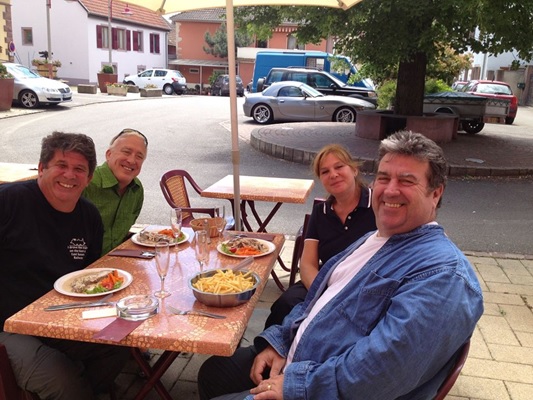 Andy, Jasper, Dawn and Lionel, Orschwihr, May 2016
I finished the month on my own with my laptop and the dogs for company, and was pleased to receive good news after a scan a few days earlier.
Yours aye,
Lionel