Ahem
When Alli and Gwen were enjoying Venice for a few days together earlier in the month, and again most recently when Alli went to Belgium to see her old friends for the weekend, I was content to stay behind. I had plenty of writing commissions and I was looking after Bonnie and Max, who expect a tight schedule of walks at a pre-ordained time and various different colour-coded snacks, treats and titbits fed to them by rote throughout the day. If any of these events are tardy or absent, they both become morose and depressed, and wander around the house looking for Alli, obviously thinking that I have tied her up and stored her in a trunk underneath the bed in the guest room or in the nethermost bathroom. By now they are each well aware of what is to come when Alli’s suitcase stands sentinel in the hall like a bad horror film. They sit forlornly by the door and stare at me accusingly, knowing that I will again be exclusively in charge of their fates, and that they must tolerate erratic, intemperate and illogical behaviour, long muddy walks in unfamiliar places, uneven meal amounts, water bowls left distressingly dry often for minutes at a time and in the wrong places, titbits at the wrong times, and nights on the sofa rather than on the main bed, none of which they have to put up with when Alli is home. For a few days we even took on a lodger dog, Ralphie, a long haired Cocker Spaniel, who got on well with Bonnie but was barely tolerated by Max, who was stoically tolerant but ultimately relieved when Ralphie and his wagging tail finally padded off. Then a Shiatzu called Georgie presumed to stay with us for a couple of days at the end of the month, although he was far too small to annoy Max. All in all, it’s been a trying month over at the Wolfsloch Dogplace. They did have a good outing to the top of the Castle in Ferrette one morning but then spent far too long in the car as I stayed chatting with a friend afterwards.
The weather has mostly been awful, with what seemed like a record amount of rain. This played havoc with the vegetable garden, although prospects for the tomatoes and beans have improved, especially after we had some help in the garden from Paul, who did in a few hours what it would have taken me far longer to achieve by spade, fork and strimmer. We have had a harvest of salad and tasty French beans already. We drove to Luxembourg to attend the 25th wedding anniversary celebration of Tony and Susanne, the Mileses of Luxembourg, Alli’s siblings in law. They had put up a marquee by the house and prepared a mighty feast for nearly 80 friends and relatives. Gwen arrived from England, and we had an excellent weekend of celebrating with other Mileses, Susanne’s family, and assorted friends from several different countries. Most of the food was home grown (apart from the suckling pigs) and Tony’s cornucopia of a vegetable garden was well spread. Ollie and Sophia made heartfelt and emotional speeches about their parents, and the weather, always threatening, finally decided to leave the party and the marquee alone, although at one stage it looked like we would all have to hold on to the rigging in case it blew clean away over the Biwer hills. 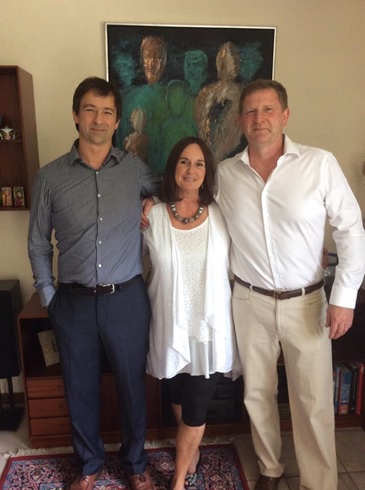 On Britain’s “Independence Day” I was very pleased to be on Europe’s greatest river, the Rhine, on a calm, informative, civilised and relaxing cruise under a blue sky with a couple of hundred dental hygienists from around Europe. It was somehow fitting to be there on that historic day, borne easily by the great momentum of water swollen from recent rain, round the curve of its decisive and abrupt turn north up past the Black Forest to the Netherlands. We sailed around the ugly container depots at the edge of Basel up to the Dreilandereke and back and had dinner after a couple of hours’ discussion of the measurement of dentine hypersensitivity. The central question was how can pain be measured and recorded for the purpose of accurate diagnosis? One might as well ask the same of the UK population and especially its younger generation over the next few years. Forty-one years ago I worked for the Britain in Europe Campaign, leafleting and canvassing large parts of Streatham and Balham over three long months, and I also worked in the EU institutions in various capacities for over ten years, and around them as a public affairs consultant for another fifteen, so it has been deeply depressing for me personally to see the witch’s ragged sleeve of the tumultuous affair just a generation later. In the maw of the result I told L’Alsace, the local newspaper, that I thought that we had exited an airborne plane without a parachute, observing also that Britain could neither walk nor fly home alone. Oh well, chin up! Maybe Commander Biggles and his mate Algy can rescue us from this sticky mess.

I ended the month dejected by Brexit but cheered by a weekend of stage drama: the Semi-Circle Group’s moody, dark and scream-laden Dracula and the Fine Comb Theatre’s Untrained Heroes, a stark and challenging production of great promise written and produced by two of Jessie’s ISB school-friends, Rachel and Catherine, on the difficult and emotional theme of the “untrained heroes” who wait for their absent partners, away fighting in war.
Yours hors combat
Lionel

Ahem The merry month started with hot weather but finished with abrupt[...]