After the strong and positive family emotions around my brother Clive’s funeral, I had a grim return to Abidjan, where uncertainties at work were worrisome. Also, the rainy season had started with a sense of overdue vengeance, as if to catch up on lost time. Thunderstorms, lightning and torrential rain competed under a heaving, angry ceiling sea flecked with cloud spume. I was a frequent visitor to the clinic for various minor but irritating ailments. I also had to work often into the night hours on texts required for the Annual Meeting of the Bank to be held in Busan, Korea. A white night of writing preceded my flight to Busan from Abidjan, which started with an unannounced six hour delay in Abidjan and continued with a dash for a connecting plane to Bangkok from the nocturnal chaos that was Addis Ababa airport. The Bank’s Annual Meetings were a week-long frenzy of unlimited activity. The working days lengthened until the small mornings, which gave way quickly to early starts and frantic deadlines, urgencies and emergencies connected with the uncertainties of the schedule. The saving grace was that my week finished with a simple and enjoyable railway journey to Seoul to meet Alli, Jessie and her partner Jurrat for two weeks of holiday together in Korea, Thailand and Bangladesh.

South Korea definitely beats Switzerland hands down for civic facility and efficiency, with easy online ways of doing everything, English offered on urban and railway signs, and escalators, lifts, and cash machines that always work perfectly. There is almost no evidence of deteriorating infrastructure and almost no unemployment. Thanks to Jessie’s organizational abilities (as well as her skills in Google orienteering and usage), we managed to see a great deal, with visits in Seoul to the interesting district of Insadong; the Jogyesa Buddhist Temple (see photo), decked in colour to celebrate Buddha’s birthday (22nd May); the Bukchon Hanok Village, where residents had put up big banners asking tourists to stay away; and the green space of Cheonggyecheon in the centre of Seoul, glinting like a river running through an urban mountain valley. I had a haircut early on the first morning in an underground barbershop: shiny round-faced men wandering around with towels around their heads, oil in their hair, and shaving cream around their foreheads, backs and sides. We all ate copiously, but with progressively less reliance on the classic local dishes, after tiring of the pickled cabbage speciality, kimchi, offered with almost everything. Our meals were sometimes sublime and sometimes ridiculous: prawns covered with chocolate on a stick; pot noodles as bad as anywhere in Europe; “Oreos churros” (enough said); sensational Korean dumplings; a Korean barbecue; and a multi-course ultra-vegan meal (they even apologized for using stimulants such as onion, pimento and garlic) at a Buddhist Temple restaurant I had first visited twelve years ago. I enjoyed it but the reaction of the others was less positive, and none of us enjoyed the floor show, a mix of female whirling dervish and kabuki. The next morning we went by cable car to the Seoul tower and observatory for a breathtaking view of Seoul, then came down on foot, and in the afternoon, while I rested a painful knee, the others walked around the Gangnam district. Alli and I went to the National Museum of Korea, a collection of ancient historical materials, enriched by the surrounding pagoda park and by the view across the mirror lake to the Seoul skyscrapers, arched together like a mountain range. Later I went to a brand new cinema complex with Jessie and Jurrat to watch a new film (Deadpool 2) and earlier we all saw a random theatrical piece that explored the limited hybrid area of slapstick comedy, Korean drumming and cookery – Nanta. More impressive was the formal and flag-fluttering changing of the guard at the Gyeongbokgung Palace, as well as the Palace grounds. 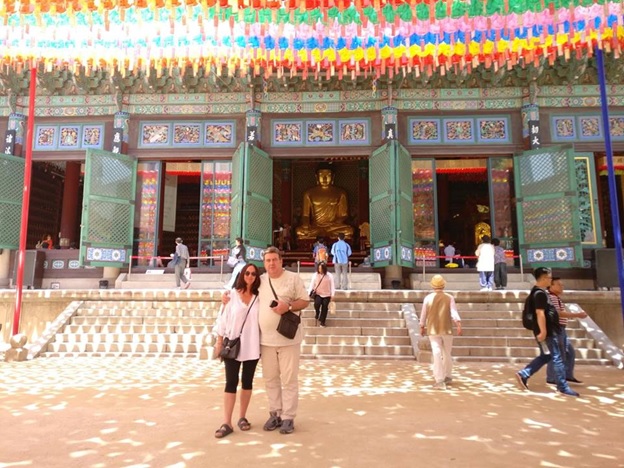 We took a direct train south to Busan on the coast in a journey of 2 hours 40 minutes at an astonishing average speed of 270 km per hour – it once took me exactly that long to get from Clapham Junction to Hassocks. Busan was just as efficient as Seoul but more tourist-friendly and easygoing, with a wide range of different restaurants and cafes near its many beaches. We visited the Haedonggung Yonggunsa temple, one of the most important Buddhist temples in Asia, sited on the rocks by the sea with its beguiling background music of Buddhist chants; I visited Busan’s informative Museum of Modern History while the others climbed the Busan tower in Yeongnusam Park before we all had a great Japanese lunch at the mountainous Lotte centre, a 26 story shopping mall. Alli and I had a decidedly European meal at a tiny Italian restaurant, the Lable, (while Jessie and Jurrat stalked the side alleys for street food, French fries and craft beer) after we had visited Haeungdae beach and its sandcastles. We also sat on the sands of Gwangalli Beach watching the underwhelming lightshow on Gwangan Bridge. We visited the huge Jagaichi fish market where we ate white fish and scallops, walked around the very picturesque Dongbaek Island, and the equally attractive Taejongdae Park, before eating a large plate of very fresh seafish and clams from the clam huts by the sea close to the lighthouse. The abalone finally stopped moving a little too close to their immolation and consumption for the comfort and appetite of some. 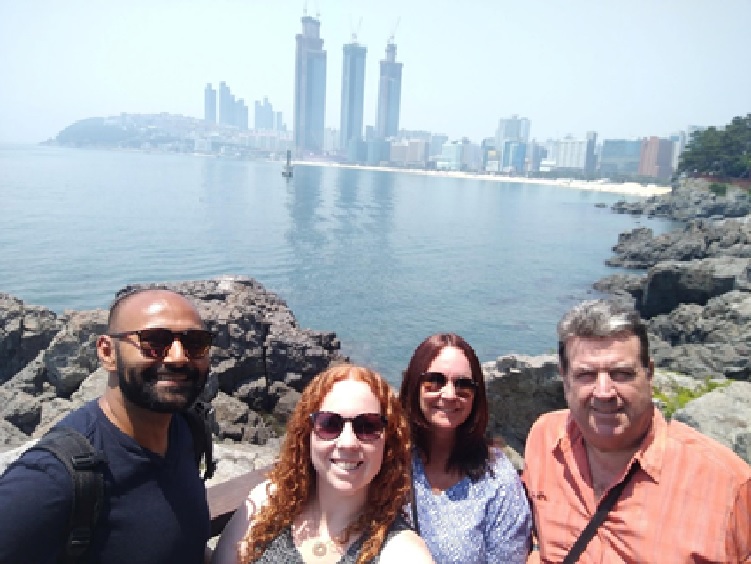 At least four simple observations impressed and fascinated me about Korea, a country famously written off by the World Bank just 60 years ago as unworthy of any foreign investment. First, litter and littering were almost completely absent, as were litter bins. There just has to be a connection, and people dutifully walk around with litter in their pocket until they find a bin. We found ourselves also doing so. People only smoke furtively in alleyways like schoolboys as the activity is prohibited in public. Second, most Koreans were welcoming, friendly and helpful towards foreigners looking in need of help (we found this also a decade ago in New York City). Third, no one gave service tips for anything, reflecting a proper respect for the inherent dignity and value of labour. Tipping is one American habit they have resisted. Any extra money left on the bar or table is immediately and politely refused and returned. Someone from a cafe ran 50 metres to catch me up to return some coins after I left a small tip after a simple meal. Fourth, health and safety is a complete obsession. We sat through long lectures and warnings about hypothetical accidents happening before a film or play, and there were many notices planted near steps, stairways, entrance ways and edges, warning of the inherent dangers. One sign read “Please do not come near as you may fall from the cliff”.

We flew to Bangkok and stayed the night in a great hotel on the Chao Phraya riverside opposite the luminous Wat Arun, and had an excellent dinner in the Blue Elephant restaurant, after a tumultuous, dashing river boat ride that made us practically feel that we were waterskiing. We flew early the next morning to Dhaka, Bangladesh, where Jessie has been working for nearly four years. We were very privileged to have a small glimpse of Jessie’s life there and I was fascinated by her flat which she shares with Jurrat. It was nicely furnished, comfortable and homey. Although we were staying in the richest part of the city, it was a shock to see the encompassing scenes of poverty, the heavy crowds, and the traffic jams, which comprised everything from bicycles and rickshaws to battered buses and gleaming coaches. One morning we toured the riverside parts of Old Dhaka, dominated by textile production and ship-repairing. Both industries are money-spinning but enrich only the owners, leaving the workers on or below the poverty line. They and their families (the children are also workers) live in tiny hovels, built as cheaply as possible but with basic amenities. We picked our way past clumps of iron chains, anchors, wood beams, propellers, engine parts, bells, lanterns, and all the leavings of hundreds of broken ships. By contrast, we spent an afternoon at the American Embassy Club, complete with pool, bar, restaurant, where it was almost too easy to relax. We ate well at a Japanese restaurant, Izumi, but we ate at home often after Jurrat’s sister Ruthba arrived on the first night bringing a banquet of food with her to welcome us to Dhaka. Jessie and Alli also went for eyebrows, finger- and toe-nails beautification, and we all went on a very pleasant boat trip with many of Jessie’s and Jurrat’s expatriate and local friends who had brought food and drink for a picnic. We finished an active day power-walking with the Dhaka Hash House Harriers (Alli’s first ever Hash). Unfortunately my weak knee forced me to finish the course in true colonial fashion seated in a rickshaw, but it was great to be in an anglophone Hash again, where there is such a spontaneous welcome, good society, friendliness and banter. It was a great way to finish our holiday.

I arrived back in Abidjan in time for Eid and to new and more spacious accommodation, having quitted my Cannebiere residence after realizing that my recent poor health had a lot to do with the damp conditions in the flat, which I had barely noticed, despite having lived there a year. I needed a new start in a new place, in which I could wake up on a weekend morning and walk to a café, buy a baguette, or, later in the day, go shopping in a supermarket, have a drink or a meal or even go to the cinema. I needed to get back into some sort of interactive society and to keep more weekends for myself. Time will tell if I can manage this. Now, where are my office keys?

Ahem While I and my colleagues at the Bank are[...]