To be honest, my brother Clive and I were too far apart in age to be all that close while I was growing up. I was born just after he had started boarding school in Oxford, and our parents were living and working in Nigeria. We never really “played” much together that I can remember. If we did, then I am quite sure that I was an extremely irritating little brother. When I was 14 he was 23 and married and I had been at boarding school already for six years. But around this time we became much closer. I used to visit him on the 29 bus from Westminster when he lived at UCL’s brutalist skyscraper student lodgings on the Camden Road. I was a frequent and apparently welcome interloper when he and Julia went out on dates, often to Disney films. He counselled me on the treatment of my new crop of blackheads around my nose. When he and Julia set up their first house in Hackney I was a regular visitor, also living there for a few months a couple of years later, while working at a local sawmill. It was a purple patch. When our families each went global, online was the only regular correspondence between us. But his visits were treasured, and he scrupulously attended his god-daughter Ella’s graduation from High School in Basel (although of course it was a last minute nail-biter).

Clive was a natural sports player and a gifted athlete. He was a particularly good tennis player, and probably this was the only area where we were acutely competitive. We played against each other often but one game, in Brussels sometime in the late 1980s, was striking. After two hours we were level on one set each, and only mutually agreed in half-expelled grunts to call it quits. Afterwards we admitted to each other a genuine fear of imminent physical collapse if we had played a third set. Apart from his need to kill me at tennis, Clive was very considerate, thinking deeply about gifts to me of the useful, instructive, and physically improving variety, such as arm and chest-strengthening devices, mind improvement games, a hockey stick, a fountain pen, and a Spanish guitar. I appreciated them all but mastered none. He gifted me my first car that actually worked – a Fiat 850, (my parents having given me a car that never did – a Mini Clubman). One way or another, he was always challenging me to do better or more in anything I was doing. And I wanted so much to have his intense social energy and especially his ability to get on with virtually everyone he met. I think he only gave up on the fraternal improvement commitment when I started writing poetry.

Clive was an entrepreneur and a risk taker. He believed that if you never take risks you will never change anything. He also believed that life itself is a risk, and unless you are prepared to take risks, you will let life happen to you, rather than the other way around. He might have worked this out from Sartre’s monumental philosophical dirge L’etre et le neant which I once found in his sports bag (probably the most unlikely discovery I could then have imagined), and I think I have only just understood now why it was there. He was inspired by his passions: humanitarian, family-centred, the advantages of mutual benefit overlaid by practical realism. He often defended the indefensible, challenged bigotry, and scorned the arrogant. He did these things because his biggest dislike in the whole world was of people who didn’t care.

Clive’s death on Friday 13th April 2018 was a shock to me, to his family, and to many others because he had already beaten cancer twice and had survived major surgery, and undergone repeated bouts of radiology and chemotherapy, as well as surviving a serious post-operative infection. He did all this without ever complaining. I was obscurely happy to hear that his death occurred in his sleep, cancer not implicated, and probably without any warning, as he would have been angry to have been aware even for a minute that he was going to die. However, its timing, while tragic, was also fortuitous. A 70th birthday celebration for him and Julia had been organized by his family for more than 100 family and friends on the Saturday at the Ritz Hotel. But first, Clive and I had had the special privilege of being invited to be witnesses of the wedding of my cousin Diane and her long term partner Brendan at the Chelsea Registry Office on Friday, the day before. I had arrived in London overnight and sleepless from Abidjan. En route to Chelsea from Heathrow I had briefly visited my daughter Ella in Putney for a shower, change of clothes and a shave before setting off to meet Clive and my cousins at Chelsea Town Hall.

I arrived early, and waited contentedly on the Registry Office steps, marked by the remnants of potentially celebrity confetti. It was a warm and sunny Spring day in London. There were seeds of dandelion drifting in the air. Diane and Brendan arrived and told me that Clive had passed away overnight. They very kindly asked if I wanted to carry on as a witness. I was completely certain that I did. And anyway, they still needed to get married in the presence of two witnesses, and the ceremony was apocalyptically imminent. At any other time in the past four decades this event would have taken its justified place as an utterly historic family circumstance, and I wasn’t ceding my once-in-a-lifetime privilege to some crazy clochard on the King’s Road. I phoned Ella and asked her to come quickly to be the second witness. She came immediately and the knot was duly sealed. It was as happy an occasion as it should have been. Jessie and Gwen arrived later and we celebrated all afternoon with the happy couple, several plates of sandwiches, and some fine wine in my cousins’ house in Holland Park. Later, I went with my daughters to my own delayed birthday dinner near Waterloo with Alli, newly arrived from Basel. 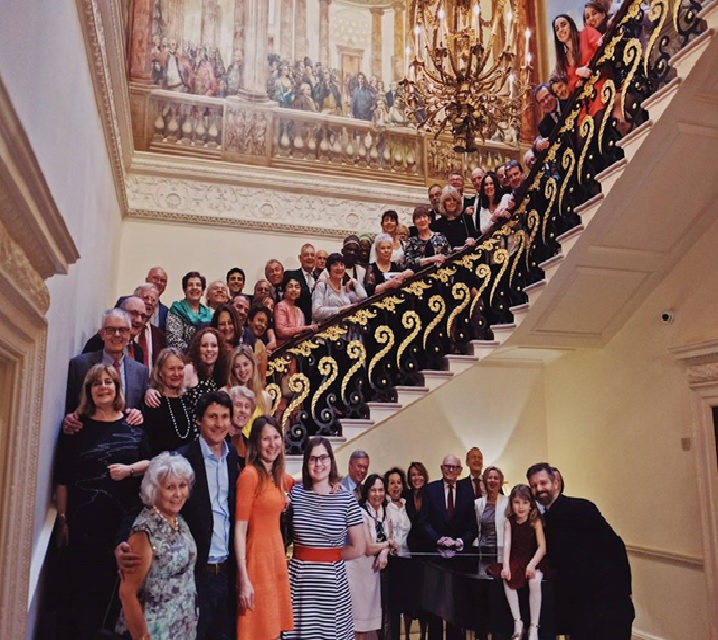 On the next morning, the Everyman Cinema in Baker Street (a staple venue of my teenage years) was booked for a special screening of a video celebrating Clive and Julia’s 70th birthdays, a marvelously evocative and affectionate portrait, after which the guests continued by coach to the Ritz for a reception and lunch. I kept seeing and hearing Clive through the crowd and I could hear his unmistakable laugh and knew that he was thoroughly enjoying the party. Most of his friends and family were there, and the room was lively with jollity, a few tears and lots of love. The birthday celebration became a joyous life tribute. His wife and children were strong, sustained by the constant bustle and interruption of friends and relatives. And as if to balance the family reckoning, Clive and Julia’s daughter Sophie was absent only because she had just given birth in Brussels to her fourth child, Theodore.

I spent the next day in Putney comfortably with my family: brunch in Bill’s, a visit to St Mary’s Church, where the Levellers of the New Model Army met and discussed an English Constitution in 1647, and a beautiful riverside walk followed by tea in Barnes with Diane and Brendan, as well as a cheering and unexpected meeting with the fabulous Hall twins later in the day. An added bonus was to meet Gwen’s new boyfriend, Scott.

Six days later we heard that Claudia, Clive’s daughter-in-law and his son Ivor’s wife, had died after a long illness in Italy. This was not unexpected, given the seriousness of her condition, but it was dreadful news for everyone. Claudia was young, beautiful, courageous, determined, and a wonderful mother to Alina, five years old, who is just starting her life at the other end of the family. Like Clive, she was also a fighter, and fought cancer for years. It is so utterly sad that nature and fate sometimes defeat human hope and expectation. Although I couldn’t be there, she was well celebrated two weeks later with a picnic in Fulham Palace, in which only a couple of weeks earlier I had been walking with Jessie. The invitation was to wear bright colours and sparkles, as Claudia would have expected nothing less. Ella was there with Clive’s family and friends on another beautiful early summer London day.

The week following the Ritz celebration and back in Abidjan, I waited vicariously for photos and posts on the progress of Ella and her boyfriend Sam and Uncle Tony, all running (and finishing) in the hot, glorious jumble and crazy phantasmagoria of the London Marathon. An excellent weekend in London was had by their family supporters: Alli, Jessie, Gwen and her boyfriend Scott; and Susanne, Oliver and Sophia Miles.

Clive’s funeral service took place several days later at the Temple Church, where 14 years ago our father’s life had also been celebrated, and where Clive and I had followed his coffin out of the church hand in hand. I had returned from Abidjan via Zurich on special leave and was able first to spend some time in Leymen with Alli and our friends Claude, Laurence and Sophie, also to witness the beautiful Alsace spring with the local Morris dancers at the Landskron Castle on May day morning and to catch up with local friends Martin, Jane, Wynne, Nathalie and others before flying to London to stay with Diane and Brendan.

The funeral was moving, positive and memorable. I understood yet again why funerals are so important within a family. The recollection of its solemnity and dignity have helped me to withstand the continuing shock that I keep feeling but that I know will soon diminish in favour of an understanding that such events are the threads of life itself. I know that in the future, whenever I think of April 2018, my heart will pause. I shall catch my breath and summon vivid memories of a glorious London spring, and of the overwhelming events surrounding the celebration of my dear brother Clive’s life, love and work; of the poise and courage of his wife Julia, his strong, dignified family, and particularly of his son Ivor, who within seven days had suffered the grievous loss of two of his dearest life partners.

May the examples of my brother Clive and my niece Claudia continue to inspire their families and relatives.

Ahem The month started cold and windy when Ella, accompanied[...] 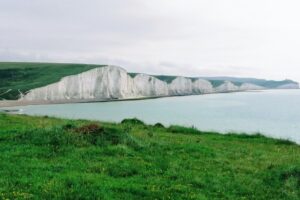