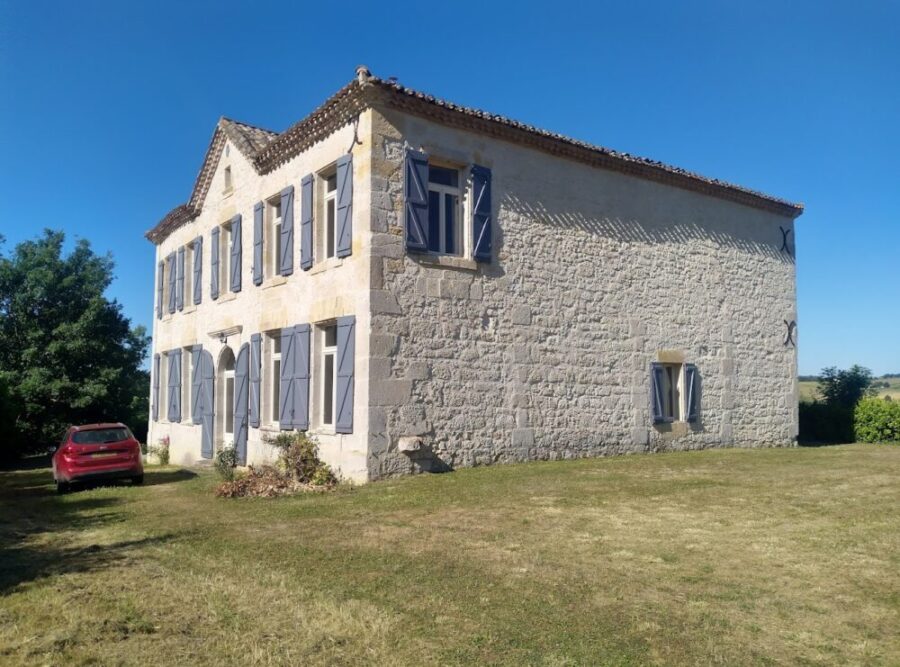 La Hune, our long-neglected house in south west France, was my location and work-place for most of the month. Plotting a non-motorway course due south, I took the overnight Newhaven-Dieppe ferry and drove through Rouen, Chartres, Vierzon. Limoges, Brive, and Cahors to tiny Mansonville (population 286), on the border of the Gers and the Tarn-et-Garonne. It was still standing majestically (as it has done for at least 350 years) but in a road with a felicitous new name: ‘Rue de la Hune’. No more lieu dit.

I had come to prepare the house for a possible sale or let, to examine other options, to generally get it into good working order, and to welcome and host visitors. Four weeks later, I left relaxed, content, and convinced that I should spend much more time living there, if only for the sake of my blood pressure. It felt good to be living in and looking after the house day to day, and I surprised myself by undertaking several DIY improvements, mostly after getting detailed advice. I also started to tidy up the house and garden, learning much more about how the plumbing, the electrics, the water, and other essentials worked. In this I was willingly and generously helped by many of the village’s residents. Jacques, who helped us maintain the garden for many years, is no longer a village resident, but other stalwarts are still there – Vivou, Jose, Jocelyn, Alain, Albert, Josette, Giselle, and neighbours Marlene and René, all greeting me warmly and casually as if they had seen me every day for the past 25 years.

An early outing was to visit, have dinner and a catch-up with old friends Marc and Edith, long-term residents of the region after moving to a spectacular domain deep in the Gers including a lake, outbuildings, orchard, the obligatory barn, and a Versaillesque formal garden. Their house benefits from Edith’s fine interior design and the previous English owner’s carpentry skills. Marc also later gave me very valuable assistance in one of my tasks for La Hune – to improve the internet coverage, never easy in a stone-walled house.

My friend Jan flew over to visit, providing excellent company for a few days, opening my senses to the delights of the region’s copious flowers, especially the wild and strong-scented roses and climbing bushes (jasmin, apple blossom, honeysuckle, lilac, mock orange, wisteria) in the locality that were particularly evident and colourful in May. We also walked along the Canal des Deux Mers at Valence and again around the small city of Agen. She took some extraordinary photos of the house, the village, and the area, and of course we went wine-tasting and food-sampling. 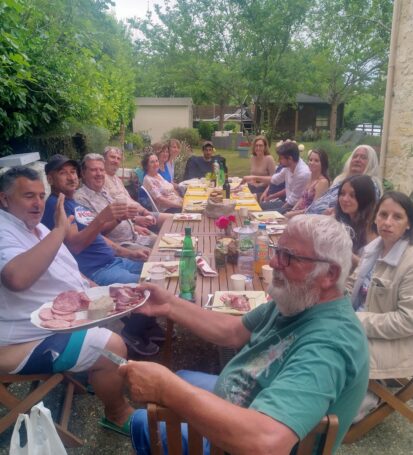 Marlene and René invited me to a fête champêtre dinner one Sunday evening in their garden and invited about 15 others from the village. The evening finished hilariously in La Hune as we had to scamper with plates, bottles, and forks in hand, to my covered terrace opposite to avoid a drenching by thunderstorm. René later gave me massive help and time in repairing our stricken swimming pool. We worked for several days on the pool, taking multiple visits to the pool shop in Agen for chemicals and spare parts, replacing the pump and overhauling the filtration system, and finally isolating the problem (two years of trapped air, can you imagine that?) then using basic hydraulics to coax the water back up into the filter system (partly by oral suction), then turning it over with the motor for several days from a green slimy constipation to a recognisable swimming pool on the very weekend that I had to leave for England.

Jessie also made a quick but busy visit, which coincided with a heat wave, temperatures at times climbing into the 30s. We managed to recreate in four days a microcosm of our family holidays over the past 25 years: we bought fresh food in the colourful local markets, now just starting their summer season (asparagus and strawberries are the main fresh produce of May). We visited the Musée de Miel in Gramont, now under new management, but with the previous owners keeping a beady eye from opposite. We ate at local restaurants, notably La Coquille in St Antoine, through which are now streaming hundreds of walkers/pilgrims a week on the Camino de San Juan de Compostella.  We went to the Savonnerie de la Tour in Auvillar and stocked up on scented soaps. Jessie cooked two excellent meals, and we paid an informative visit to the new vineyard in Bardigues, the Domaine de Thermes, already producing some notable wines. The day after Jessie left, the temperature fell suddenly. I wore a pullover for a day or so before it went canicular again.

Throughout all this but mostly in the mornings I laboured quietly on my new editing commissions, which arrived daily by the 7,500 words’ worth for a 24-hour turn-around. The work, weirdly,  is interesting. In the past month I have become temporarily expert in diverse esoteric subjects, from the evaluation of greenhouse gas emissions in the cultivation of seedless lime fruit in the Mekong Delta to hybrid electric car noise annoyance, and equity within healthcare systems in Romania. Each article takes me a few hours, after which I feel cleverer, vaguely deserving of a reward. For example, after drinking some wine at the Coquille I decided to visit the place the wine came from. There I met the ‘two sisters’ of Clermont Soubiran, Catherine and Isabelle Orliac, the proprietors of the imposing Labastide Orliac, and as aristocratic as you get. Their family supplied wine to the Bourbon Kings in the late eighteenth century and have a letter from Louis XVI to prove it. They showed me round their bastide chateau, on the crest of a hill with ten hectares of unusually rich soil on the slopes around. The 360-degree view, of course, was sensational. “And that,” Isabelle said, with a sweep of her hand, vaguely indicating the Golfech nuclear power station in the near distance, “is… modernity”. She then offered me probably the best taste I have experienced of a new red wine in many years. It had only been ‘drinking’ for two weeks. I am bringing more friends with me next time.

I drove back to England, spinning out my return journey with strands of pleasure, for example by visiting Marcel Proust’s fictional childhood home. The town of ‘A la recherche du temps perdu’ (Combray) is Proust’s invention but it also reflects impressions of his childhood visits to Illiers, his father’s birthplace near Chartres. In 1971, the centennial of Proust’s birth, the town smartly changed its name to Illiers-Combray, thus taking its new nominal barrel from a work of fiction. I also stayed in two delightful places on the way, near Limoges and Chateauroux, respectively. Despite its tunnel-vision monocultural motorways, France has not lost its knack of providing outstanding hospitality in discrete and unusual corners. However, the odds have lengthened for such serendipities. Proprietors are struggling to find staff, according to the rows of closed hotels and silent restaurants in almost every small town I passed through. I reluctantly found and booked hotels online, jeopardising my penchant for travelling through France by ear, on a wing, prayer, and the hoof. Nevertheless I suffered an unexpected puncture while on the very last lap of my return journey but immediately found a garage around the corner where a man cheerfully and efficiently replaced the tyres in a trice for a quarter of the price I had expected.

In praise of the open road, 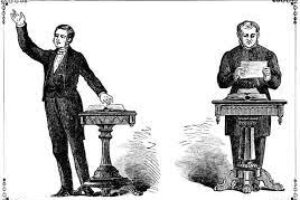 A hyperbaton is when you put words in an order[...]