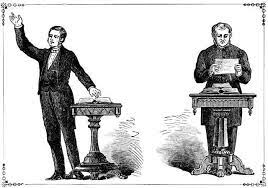 A hyperbaton is when you put words in an order that seems or sounds wrong, which is difficult to do with confidence in English. When almost everything else in the English language is so careless, lazy, and slapdash, the rules for English adjectival word order are throat-tighteningly strict. Punishment for this crime, as ever, is obloquy and shame.

Adjectives (the most anarchic words of all) have to be in the following order: opinion-size-age-shape-colour-origin-material-purpose (then) Noun. So you can talk about buying a precious little new slipper-shaped brown Belgian alpaca glove puppet. But if you get that word order wrong even in one respect you’ll sound much more like a maniac that you really are. As ever, American English usage is broadly the same (although subservient to modern rock lyrics). It was, after all, an itsy-bitsy teenie-weenie yellow polka dot bikini.

As size comes before colour, it follows that green great dragons can’t exist. J.R.R Tolkien’s first story was about a “green great dragon.” Aged seven, he showed it to his mother who told him that there was no such thing as a green great dragon; it had to be a great green one instead. Rudyard Kipling got it bang-on with his esculent description of a river in Zambia: the “great grey–green, greasy Limpopo River, all set about with fever-trees”.

It’s an odd thing that every English speaker uses the adjectival priority list almost unconsciously, but virtually none can write it out, except the writer Mark Forsyth, author of the Elements of Eloquence. Nevertheless, a mistake in the chosen order renders the writer or speaker guilty of the possibility of not being “proper English”, tantamount to an Anglo-Saxon sentence of literary and linguistic death.

However, as with all English language rules, what properly counts are the exceptions rather than the rules. For example, size matters so much that sometimes opinion has to follow size, as in ‘big bad wolf’ and several other similar examples which exist also to bamboozle non-English speakers and introduce the mysteries of what the English call “nuances” – French words making themselves useful for filling in the gaps that Gammon English leaves.

A small test to end this short scribble: re-arrange the following words into their natural order: