One of the many drawbacks of living in a house full of women (where even the dogs are bitches and the chickens are hens) is that a bad haircut cannot easily be downplayed. I have endured the past three weeks with an unlucky haircut that left me a dead-ringer for a bilious Greek cruiser crooner. Thanks to the stand-in barber’s failure to speak an intuitive mélange of Italian, French, Spanish and English as I do and as my normal barber in Rebstrasse does, I was left one afternoon with a teenage No.2 on top, shaven ears and straggly 70s greasy locks curling erotically below my collar like a rustle of under-arm hair caught in the sink. My totally cool white flash now looks like an asymmetric bald patch and my public credibility as a huggable friendly large hearted type has been superseded by a new look: shorn-shifty-bulbous. The worst of it was that I was accused of having a mullet. Moi? I do admit that I once possessed a Dave Hill cut with a purple velvet bell-bottom suit but those times are gone. Anyway, to the feminine flak of shocked comments greeting the new style, my responses were mainly manly and sterling: “Who actually cares?”, “It will grow back in a fortnight”, and “You can get used to it, surely?” but these rejoinders do not seem to feature in the women’s list of everyday family phrases. Nevertheless, I privately believe that the longer back-curly neck hair effect still beats the pimpled setsquare squaddie look of the Snowdons of yesteryear.

Alli’s brother Nick and his children stayed with us for a couple of days on their way back home from holiday in Mansonville. They arrived while we were at an enjoyable party elsewhere in the village at the Browns. I had the rare experience of leaving a social gathering unsociably early (but none the worse for so doing). Nick also brought back that which I had forgotten when I left our holiday home a couple of weeks earlier, namely some board games and Gwen’s suitcase. I went with them to the Landskron Castle where Bonnie spent some serious play time with a massive mastiff while the Miles climbed to the top of the castle and down again. They departed for Graz on a complicated route made more so by fears of being stopped for not having a child seat in Switzerland. Jessie came back from Bangladesh and spent some days with us to celebrate Alli’s birthday before going back to Brighton for her Masters in Criminal Law at the University of Sussex. With an excellent performance assessment for her work in Bangladesh, she was brimming with ideas about her future plans. Would that my father had been there with us as she set out all the exciting academic, travel and career options following her post-graduate year. Ten of her Ultimate Frisbee friends from university also came over to spend time with her, the original idea being to camp in the garden. This never even looked like happening so we had a particularly full house for a few days as they mixed a polite formality to us with an heroic consumption of beer, wine, cake, toilet paper and sausages, digested into dormant mornings, poolside afternoons and a few trips to Leymen and to Basel. Jessie finished the month by successfully completing the Tough Mudder obstacle course in Wales with friends, encouraging Sussex freshers into the clutches of Ultimate Frisbee and raising money for Meider Jono Asha (Hope For Girls) a Bangladeshi charity which provides education, work training, medical help and support to young women from the most deprived parts of Dhaka. There’s still time to donate on: http://m.virginmoneygiving.com/mt/uk.virginmoneygiving.com/fundraiser-web/fundraiser/showFundraiserPage.action?userUrl=ladz&faId=371054&isTeam=true

Ella came over with Sam to spend some days with us after a full summer of working in Sussex (and living in the family flat) and before spending a few days in Malaga. One day we all went on a trip by train and boat to the summit of Rigi by Lake Luzern. The day started brightly but, as we rattled nearer the top in our mountain train, we were enveloped in thick fog, preventing access to the extraordinary view from the summit. Instead we all sat down and ate an indifferent lunch at the hotel, as it was far too cold to hang about outside. About twenty Chinese men were playing cards raucously in the dining room, some of them flip-swishing huge wads of Chinese bank notes as they played, laughed and argued amongst themselves. We rattled back down the mountain and boarded a shiny paddle steamer bound for Luzern. Thanks to a successful panic dash for the Basel train upon leaving the boat, we managed to get back home in time to drive Jessie and her friends back to the airport before eating together at the Ange in Leymen. Ella and Sam left the next day for Malaga and suddenly the house was quiet again. A week later, Ella, this year’s Editor of the Loughborough student magazine Label, started the term in a whirlwind of activity involving co-ordinated social media, publicity and recruitment at the Loughborough freshers’ fair.

The latter days of the month pointed to the luscious joys of the autumn season: morning mists meandering around the hills, light webs of drizzle playing upon the leaves that had already fallen (a process from which the better English word for the season is taken), and our neighbours Geoff, Ginelle, Desi and Nicole all began to move into their respective neighbouring houses on the right side of the road. We went out to dinner with Martin and a newly arrived couple in the village, Wynne and Nathalie, and also joined Ginelle and Geoff for a celebratory drink to christen their bright new house, while Alli joined with others over several days in helping Nicole to paint some of the inside of her house. The Barneses and the Jarvises came over for an Indian Feast which Alli had cooked over several days (recipes from the excellent Hairy Bikers’ Curry Cook Book); then Jasper, LeAnn and Andy came over the following day to help me clip the wings of our chickens (too late for our vegetable garden) and reposition the celebratory bird bath.

I found myself at my desk working longer but earning less, prompting me to engage in some hatch-battening marketing (see www.clementreputation.com), ramping up my blog output, getting out more, advertising my wares with the British Swiss Chamber of Commerce, English language journals and local theatre groups and generally getting out more. In this mode I went to Berlin to attend the inaugural conference of Food For Thought, a bold and colourful food policy initiative created by my friend Christine. My new edgy working status decreed that I should stay in a backpackers hotel called the “Transit Loft” in Prenzlauer Berg and it was quite a revelation, as I found it to be clean, cheap, tidy, efficient, polite, well-run and well-furnished. The notices on the walls spoke neither of political counter-culture nor of dark drug-fuelled divination, just jolly bike rides and bracing walking tours. On a spare afternoon after the conference I hired a bike and cycled towards the North towards Buch and Bernau, enjoying in particular the Barnim nature conservation area. I took in great big lungfulls of late summer warm air as I rode lustily on tidy bike paths through the immaculate German countryside. It was my first time at leisure in the old east side of the country and I shall certainly come again.

Yours putting myself about, 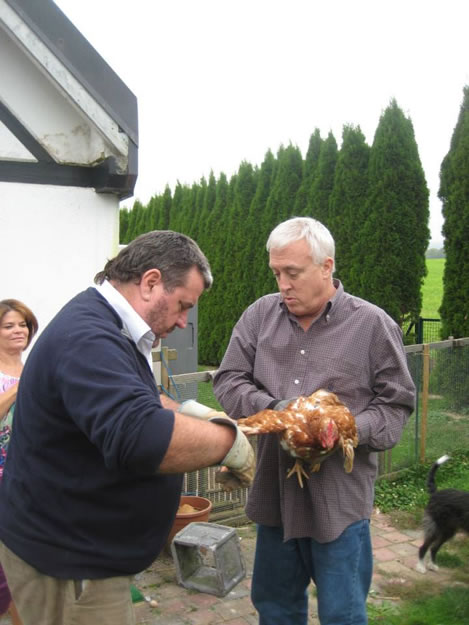 Ahem, We have spent much of the month closing in[...]