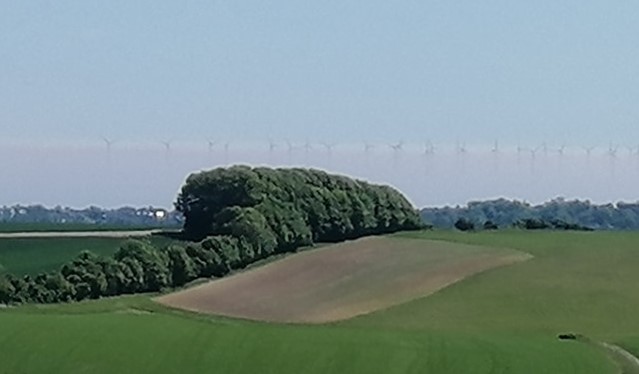 Jessie’s 29th birthday was celebrated on Europe Day with great success and aplomb. The 9th May is a very ‘international’ and upbeat day. It also celebrates 25 years of Austria in the European Union, 70 years since the Schuman Declaration, 75 years of the United Nations, the 250th birthday of Beethoven, and national windmill day. It was also Ascension Day in the year that Jessie was born (as well as in 2002 and 2013). Her partner Jurrat capably organised extensive video opportunities for her friends and family to wish her a happy birthday. Unfortunately, many of the presents ordered did not come on the right day (including ours) but it looked like a proper birthday occasion from the photos and videos. Within our family and probably all over the country, there is a collective heartache – a fathomless overhang of postponed celebration and delayed joy – moram gaudium.

The sudden death of Nigel, a close personal friend in Abidjan, launched memories of the more enjoyable times I spent in Abidjan, often in his company and others. Nigel’s friends gathered afterwards for a Zoom wake in which we recalled his unique personality. Outwardly lugubrious, his main attribute was to be an exceptionally kind and sensitive person. Befriending people was in his nature; as a matter of personal policy he welcomed new arrivals to Abidjan and reassured those who were unsure or worried about their life or work, of whom there were many, including me. An aggressive tumour on his spine was detected only when a recurring pain in his back was scanned and diagnosed as advanced pancreatic cancer. I spoke to him when he was in hospital the following week. He died 36 hours later.

With the easing of the lockdown, far less quantitative than that for public spending (the sudden and rushed-out appearance of the ‘magic money tree’ was procured by manual sleight from a long-ignored secret state pocket), my thoughts turned to local outings and discoveries. I went out daily with the dogs when I could, and I am looking forward to using the National Trust membership that Jessie bought me for my birthday. I also had her long disused bicycle repaired with a view to exploring local highways and byways. A first exploratory tour provided an unexpected adventure in discovering the rough end of Wivelsfield and Bedelands Farm Nature reserve including Valebridge Pond and Meadow, reputed to be the original location of the area termed ‘World’s End’. This reminds me to note, whilst walking the dogs on the South Downs, I looked across Hove to the sea and viewed an extraordinary mirage of the energy turbines near Brighton. They looked like the Martians in The War of the Worlds, hoisted into the quivering air to hover menacingly a hundred metres above the beach.

The arid conditions have done more than just introduce refraction and encourage us to have our first barbecue of the season. They have slowed or damaged growth in the vegetable garden despite daily watering (we have been informed by the local Council that the hosepipe cannot be used on the lawn). Most of the expensive seeds (whether sprouted or not) that I planted in the greenhouse were consumed by a malignant and mysterious organism that could lift peanuts and raisins clean away from delicately set mousetraps then burrow like a priapic finger into pots and trays to prise out and snaffle the precious seeds. Every night I restocked all the mousetraps and every morning the victuals were gone with the mousetraps still primed and with gaping holes in my seed pots and trays. I have essentially been an attentive but unappreciated waiter; and half-expected to see tiny morning billets doux with written demands such as: “Dear supplier, Your peanuts are very cheap and lack quality (maybe from Poundland?). Kindly provide a higher quality (eg Waitrose Select) or change the menu. NB We are partial to cashews (unsalted). And please supply adequate refreshments. With affectionate squeaks and nibbles, les parvenus”.

I was musing, while clearing and re-setting the mouse restaurant tables, whether a specially equipped lion or stag beetle might be strong enough to carry peanuts away but not heavy enough to be caught? Then I almost stepped on a dead mouse in a trap. The mystery was over. But it’s just another skirmish in the eternal mouse-human conflict for planetary and greenhouse hegemony. I still place the traps and catch the occasional mice while the seeds continue to be plundered and the nuts eaten. I imagine them cynically singing ‘Here we come gathering nuts in May’ despite the fact that there are never any nuts in May to gather – except those in my greenhouse, balanced on the mousetrap springs.

Our extended family quizzes continued, and an even spread of results across the main groupings is achieved according to the proclivities of the quiz master, although (checks notes) the group in which I participate appears to be the overall leader, thanks mostly to the post-millennial wisdom of my nephew Joe, who has been studying hard and took a virtual exam last week. Alli, initially unwilling, took an enthusiastic turn as quiz-mistress later in the month, and a very interesting and varied quiz it was, with questions ranging from Mastermind special subject to the bleeding obvious. Gwen’s academic achievements proliferate – the exam she took last month on clinical skills in canine behaviour won her an unprecedented mark of 95%, contributing gratifyingly to her overall degree result. She is very motivated to return to York, take residence in her shared flat and begin her final year. I have started creating crosswords, which are much more complicated than I had thought, especially if the rules of a common theme and a square puzzle with precise diagonal symmetry are to be followed. I attach my latest effort for your cerebral pleasure or pain. In keeping with a vital Koranic precept the crossword is not perfect.

Good luck to all. Here’s hoping that only crosswords and no cross words furrow your brows during this time,

Photos: Martians over Hove from the South Downs, May 2020; 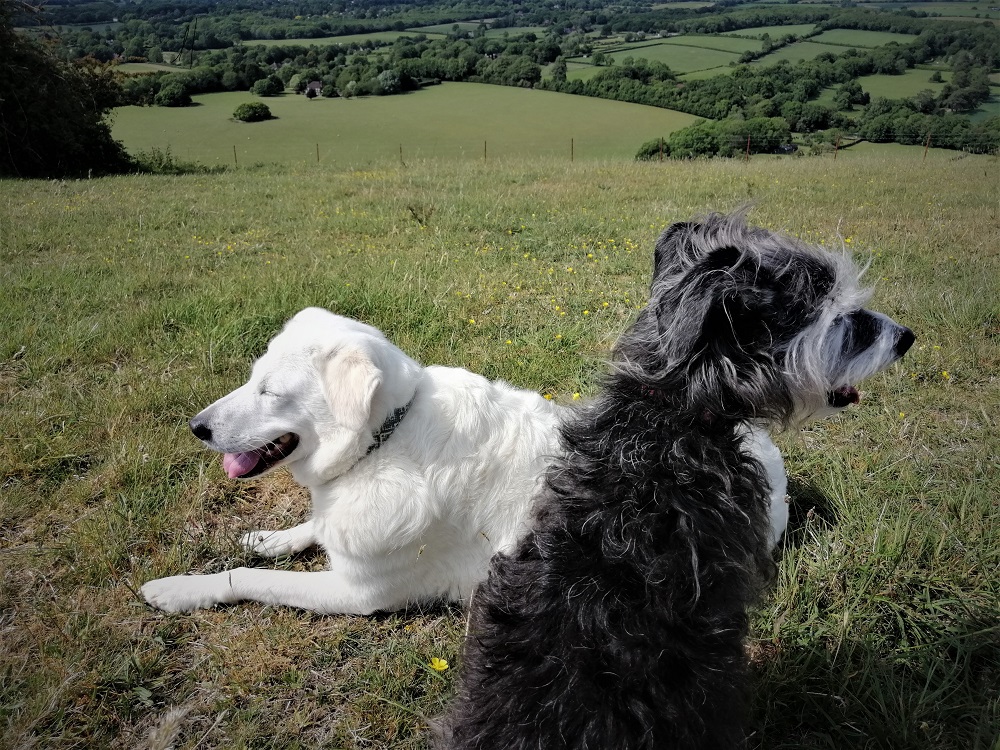 Max and Bonnie on the South Downs looking north; May 2020 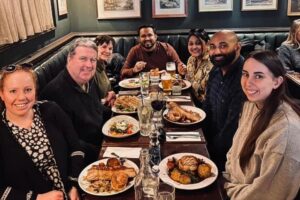