I have finished Philip Pullman’s Northern Lights, the first book in a trilogy for teenagers, which has a huge amount of creativity and readability and is in my view a lot better and more meaningful than Harry Potter. I have also accepted that the summer is over, and stowed away most of my t shirts and shorts. My wardrobe is now mostly characterized by the fall and winter collections. It is about time. The warmth has gone out of the days and it will soon be winter; We went last weekend to the 25th anniversary celebration of the International School of Basel, where all 3 of my kids are now studying and where there was an open day to celebrate its quarter century of existence. The sky was already threatening and an hour later it started to rain. Before then Gwen had played and lost on most of the stalls, and had her face painted as a rare butterfly, and both Jessie and Ella had played some energetic football for their teams, the latter getting to the final, where they played bravely and well, but lost to a hotly disputed goal scored during penalty kicks right at the end. Walking around was quite fun but it did not really have the atmosphere of a proper local school. I could hear people with various accents of English talk about their 4 wheel drives and their husbands’ salaries. I saw a work colleague and his troupe of Morris dancers make light of the rain and dance around with rings, bells and clashing sticks (trying unsuccessfully to catch my eye).

Later we visited the Zoo Ranch Siky, where we had nearly gone the previous weekend. This is because we are determined to try and do something noteworthy and substantial every weekend. We arrived at a small and rather shabby little zoo, with its sole claim to fame some white tigers, who were, along with the lions, sleepy and unresponsive, as anyone might be in the circumstances. I thought it rather a poor show, and a good example of why zoos are not very worthwhile institutions. There was also a short and also rather shabby dog show, featuring some performing dogs.

Every morning I make the tea and have an early breakfast, getting on my way generally just after 7.30am and making it into the office less than half an hour later. I must be getting fitter as well as more retentive as I am starting to time myself and to try each morning to get there quicker. But now I have called a truce after a couple of near-death incidents caused by my anxiety to shave another 30 seconds off my time. No more no way. I’ll now wait for the Spring to time myself again as the nights are drawing in and I am starting to entertain dark thoughts of taking the tram when it gets really dark in both the mornings and the evenings. Not to mention hail, sleet and snow. I also managed to achieve my primary objective which was to get there and back in less than an hour. It really does seem as if the record could be cut down still more for some time to come. I can tell this from the many cyclists who still flash past me on hills down and up and on the level going into and coming out of town.

I had a really nice dinner in Brussels last night, characterized by excellent conversations with both my neighbours (it was a long table) and the man opposite. With Bernard I talked about the French rural economy and the sense of egalitarianism that prevails in France. He agreed but claimed that a sense of liberty is correspondingly lacking. With Georg I talked about the recent Swiss Referendum, which appears to show that the Swiss are not keen on foreigners. We also talked about living in Basel, and on the probability that I would not wish to cycle to work in December, January or February. With Sheena I talked about some ideas for helping me approach the Indian Government with a cunning plan. When the party broke up at around 10pm I left to head northwards on Avenue Louise to meet Phil Murphy, an old mate from my advertising days, at MacSweeneys, a moderately disreputable bar downtown. As the game in which Manchester Utd beat Fenerbahce 6-2 was just finishing I gave Phil advice about his career. I wish I could take advice as well as I gave it.

My American friend has just sent off her postal vote for the Presidentials. She went for Kerry. 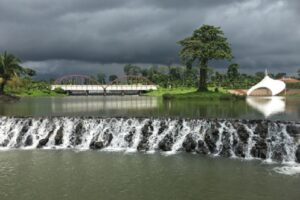 Ahem, Bulbous fists of mist gripped our village for several[...]