Ahem,
The first days of the month saw me chasing around town in vicious and ever decreasing circles, scouting for credit to cover a temporary cash shortage; discovering, not for the first time, that access to credit is getting tighter (it has always been gasping tight in Switzerland). In fact, it seems to be available only when you can show that you do not need it, which makes it difficult to get it when you do. I discovered that my company credit card, despite its eponymous objective, did not yield credit but just gave access to a proportion of the money already in my bank account that, unknown to me, had been frozen for this purpose against all other claims on it. And I hadn’t even received the card yet. I wrote to them offering a critique about the “facility” that they had sold me and its close relationship to a shabby, cynical scam but they were unimpressed with my argument and the twinkling humour in which I couched it.
For my 57th birthday, a plane ticket to and from Gatwick had landed in my card from Jessie. I was to join Gwen and Alli, who were already going to the UK for a week, although my ticket was just for the weekend. Alli and I had wondered what was being planned ever since her parents had suddenly brought forward her flight, and Jessie had mysteriously asked me for my passport details and told me to keep the weekend free. Sources close to our eldest daughter could reveal only that we were meeting “someone special” for Sunday lunch. Who on earth could that be? Neil Young? Harry Windsor? Thea Gilmore? 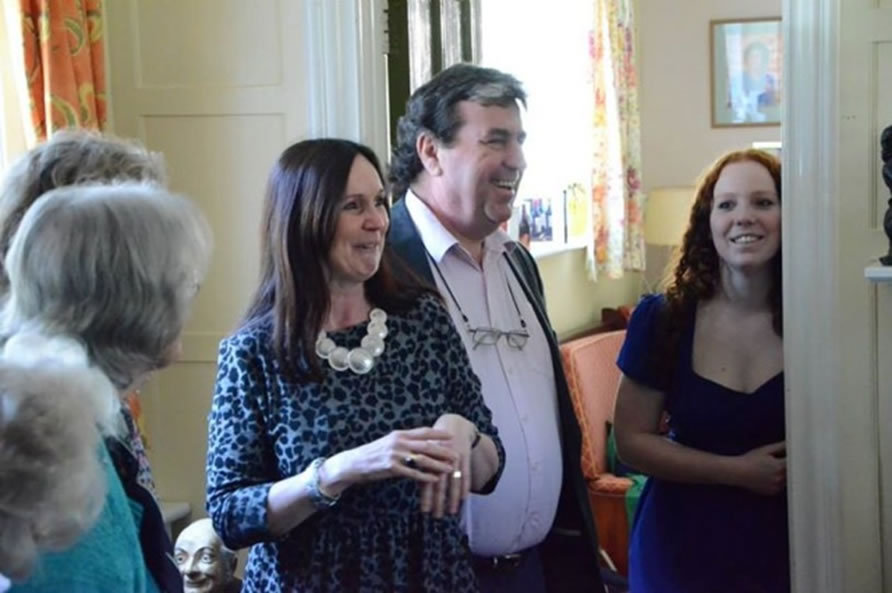 Fast forward to a sunny Sussex Sunday morning, and neither Alli nor I had any idea of the magnitude of what had been organised for us, as we yammered with our friends Robert and Anne in their garden in Hassocks before returning with them to my parents-in-law’s house, where we saw more than a dozen unfamiliar cars scatter-parked as if they owned the place. Most of our friends and relatives had assembled in the 90 minutes that we had been gone (apparently arriving at closely controlled 15-minute intervals at Jessie’s direction). They included all the people that we realistically hoped might be the mystery guests, and many more we hadn’t even dared to expect.
So this was the utterly unforgettable and totally surprising Surprise Silver Wedding Anniversary Party at Broad Oaks, Burgess Hill, organised by Jessie, assisted by Ella and Gwen, financed by Laurie and Kay, graced by friends and relatives coming from far, obscure, obvious and wide, unrolling a call that included Adam, Angela, Eleanor, Vanessa, Barbara, both brothers (in-law), almost all the Snape and Dampier families and Debbie Miles, cousins Diane and Brendan, Andrea and Nigel, Julia, Robert and Anne, Sam, the Tallis Locks, Laurence and Sophie, cousins Diane and Brendan, our daughters and parents (in-law), two dogs and the three–tiered family of brother Clive with Julia, Ivor, Isabella, Claudia and the newest, most gorgeous Stanbrook, Elina, all blooming and flown in like a prize arrangement of rare delicacies from tropical Africa; others from Brussels, London, Kent, the West Country, Suffolk, all there to wish us a happy anniversary. There were also numerous hard luck stories of those who couldn’t make it: Dawn got beer poisoning in London, the Barneses were bedazzled in St Moritz, Tim fell off a ladder in Wiltshire, Fionnuala emigrating to Rome, Anne marooned in Belgium, Debbie sold into slavery in the Gambia. Our world had been organised and reshaped behind our backs. We were excited, honoured and humbled by the duplicitous perfection of our children, parents, siblings, other relatives and friends.
Still distracted by the weekend’s events, I came back without my keys and so had to spend much of Monday in Basel arranging for spares to tide me over for a week of work at home, office and the care of the dogs. LeAnn saved me a good couple of hours by driving me from central Basel back home to get a spare key to the car, then to collect the car from the airport, where I spotted Andy and the recovered Dawn and was able to bring them back home before picking up the dogs from friends in Oberwil. The week afterwards went too fast, and I got much less done than I had wanted, although I did take the car to the garage in the next village and walked back with the dogs along the old straight track, now hardly used, between the two villages. I saw parts of the centuries’ old three day festivity of the Baseler Fasnacht, one of the only Protestant carnivals in the world, which turns the city into a state of moderate but colourful fermentation for which neither remission nor confession is needed. When Alli and Gwen came back from England, we had dinner at L’Ange and started to enjoy some days of hot weather, during which I could be found digging a large hole in the garden, the better to repair a leak in the swimming pool, as well as mending a fence. It kept my mind from wandering. 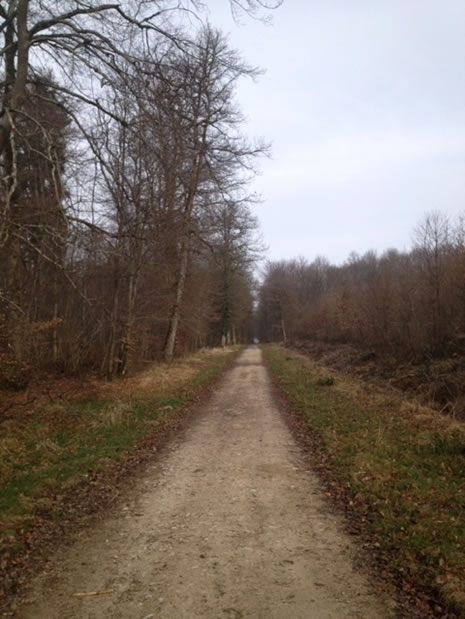 The Old Straight Track between Hagenthal-le-Bas and Leymen, Alsace, March 2014

We joined with friends to have dinner together at a Thai restaurant in Basel but were disappointed with the quality of service and the food, which seemed to us to be careless and inattentive. A later meal at an Indian restaurant in St Louis was better, and our wedding anniversary lunch at Le Trianon in St Louis was the best of all. I also had a very enjoyable meal at the eternally Italian Da Gianni in Basel by the Rhein and walked through a slightly hung-over post-Fastnacht Basel center afterwards. Gwen has been concert-going again; she watched and met the 1975 in Zurich, and Alli and I went to a party given by Nicole for our ex-neighbors, Simon and Marian, and to dinner with friends at a promising Indian restaurant in St Louis. I also made a ten-hour dash by car down to Mansonville in the Tarn-et-Garonne, in order to establish that La Hune, our holiday house, will henceforth be rented long-term and get a major makeover, coordinated by a French couple who have become enamored with the house. It means that La Hune is now, I am sorry to say, out of circulation to friends and relatives for a while, but it also guarantees its continued survival for the future in a more sustainable form by acquiring modern insulation, heating and security, rewiring, new parquet flooring, interior repainting and the replacement of the main external doors. As you can see, the month smartly swept us up with it and marched us through the clocks into summer time (Spring Forward, Fall Back). The light half of the year has begun. With our febrile credit rating, we will have to make do with the stirring of lettuce, chilli and tomato seedlings and a clear-out of the garage. And no messing about: yes, Alli has been on the sun-bed already.
yours from the greenhouse,
Lionel

Ahem While I have been very comfortable over the last[...]