Ahem
I’ve been busy. My mother occasionally used to say that there was “no rest for the wicked” and that “the devil makes work for idle hands”. She would also sometimes tell me to “have some gumption”. I recalled these expressions on the 17th anniversary of her death, when I was particularly busy and stretched in different directions. The long mission last month to India, Italy and France was followed within a few days by another, first to Berlin for a special G20 meeting on Africa, then to Washington for a business conference, government meetings and an award ceremony. After the Washington meetings, by contrast, I managed to wangle some days off to visit friends in Virginia.
In Berlin the G20 special conference on partnership with Africa was held in the eccentric location of the dome of a giant industrial gasometer, which was peculiarly subject to local warming. The collected speeches of a parade of African and European leaders uncoiled slowly through the day in front of hundreds of sweating dignitaries and flunkeys, many in full military attire. I was told by a local that the site choice was “sehr Berlin”. But the city and its people never fail to impress, and I managed to get out before the Conference for a while to stroll around Potsdamer Platz and have my first white asparagus of the season. Due to tight deadlines, our delegation had to leave Berlin by the force majeure of a late night Ryanair flight to London Stansted. The experience was unforgettable. The flight crew rolled up in a van 90 minutes late, at midnight. We had all been waiting for an hour in an old bus parked forlornly in a far corner of Schönefeld airport opposite a dark and silent plane which clearly came from the airborne knackers’ yard. We had been wondering if we were waiting for the wrong plane since several Ryanair planes packed with passengers had cheerfully zoomed into the night while we were there waiting in the dark. Suddenly, a crew turned up in a minivan. They unlocked the cabin door of the plane, clambered in, switched on the lights and started the engine. We listened, incredulous, to it rasp, cough and start after some initial cranky whinnying. Twenty minutes later we were airborne and staggering to Stansted. We touched down (with the cabin door open) in deepest Essex at around 2am, from where we took taxis to Heathrow to spend three hours in a bleak hotel before boarding the 7am flight to Washington. And we nearly didn’t make it. Bleary-eyed but sharp-suited, we got to the desk a little after the gate closed. This resulted in an undignified collective plea for special treatment followed by a mad dash to a gate at the other end of the airport. 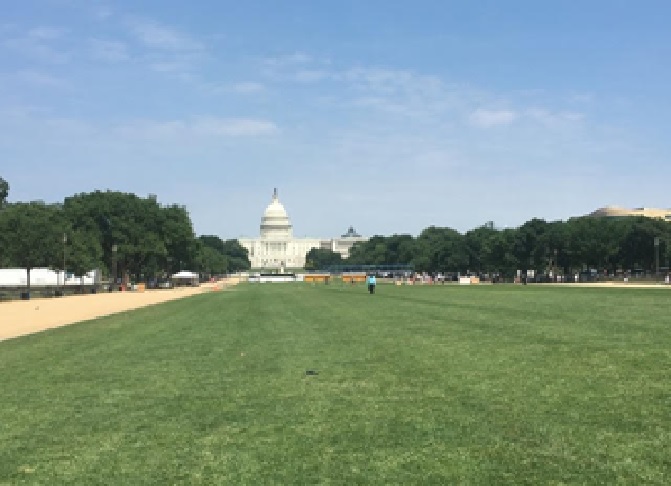 In my second Washington visit this year, I avoided the Willard Intercontinental in favour of the Hilton Garden, which was less ridiculous but equally error-strewn and fading. On the day after Washington’s Gay Pride weekend, I was allocated a room in which, opening the door with my hands full, I interrupted two men packing their bags. Suitcases lumber-jangling, I exited, then got stuck in the lift for several minutes because of a faulty room card. Since I wasn’t in a hurry, I could laugh it off while rehearsing my moves as a latter day Brian Rix.
The award ceremony (a Lifetime Achievement Award to the President for his work on nutrition) was a warm and friendly affair, followed by media interviews, a speech at a business conference, and meetings in the US Treasury. It was also followed a fortnight later by the announcement that the President was the chosen Laureate this year for the prestigious World Food Prize. Following a last evening of bilateral meetings in the hotel, I had the glorious sensation of being free for the next few days, during which I was going to stay with a long-held but rarely-seen American friend. I spent the rest of Thursday wandering around art galleries, indulging myself with the luxury of plenteous time and high culture. The next morning I headed south west by hired car through America’s history, past towns with names redolent of the savage civil war that tore the country apart for four years in the 1860s: Manassas, Culpeper, Stonewall, Madison, Charlottesville, Fredericksburg. I arrived just after mid-day in Esmont to meet Sarah and her sister Felicity who happened to be visiting – a providential bonus as I had not seen her for over 35 years. We had lunch together then I spent the afternoon in Scottsville walking around the levy by the James River, browsing in the shops as well as sampling the local brewery, before getting a haircut at a local barbershop during a cloudburst. Sarah had made dinner when I got back and we sat on the back porch afterwards, chatting as if we had last met each other only a few months ago. I also played with the indefatigable Talulah, whom I exhausted by throwing the tennis ball repeatedly into the undergrowth of the woods. 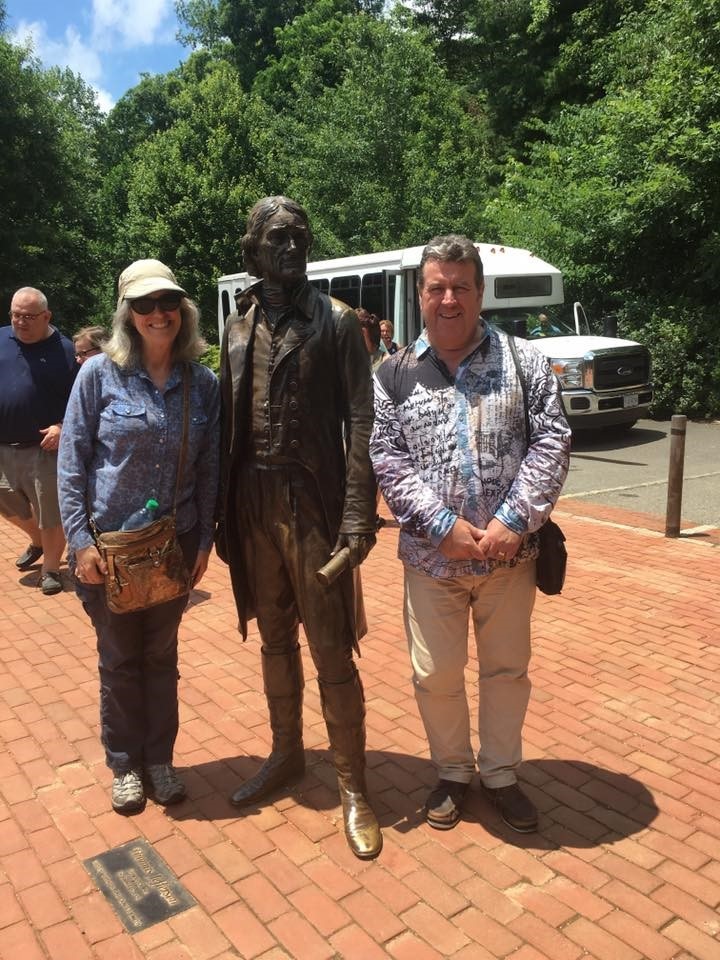 The next day we visited Monticello (headline photo), the ancestral home of Thomas Jefferson. It was a hot day and there were many visitors but it was a fascinating, well organised place, with its inevitable Visitor Centre and café. The guides and the commentaries now state more openly the stories and experiences of the hundreds of slaves who worked there and made it what it became. We also walked around the campus of the University of Virginia, founded by Jefferson in Charlottesville. Sarah’s partner John arrived home later that day and we all had dinner together and moaned about Trump.
I left Esmont the next morning and visited Charlottesville again, keen to buy a good history of the Civil War, and to wander around the town centre in which the Paramount Theatre still had its smaller back entrance, originally intended for blacks only, and kept for historical record. I then drove to a B&B near Fredericksburg and on the next day walked through the small city, which has strong associations with George Washington and Thomas Jefferson. I learnt about the horrific battle of Fredericksburg with the help of a video in the Visitor Centre and a guide leaflet while I toured the battleground site. The impeccable lawns and gardens in the south of the town near the Sunken Road and Marye’s Heights made the dreadful scenes of carnage and slaughter difficult to imagine without the accompanying black and white photos. Feeling sombre, I then drove west across the Blue Ridge Mountains to explore the ridge the next day. I took the Skyline trail through the Shenandoah National Park, stopping several times on each side of the Blue Ridge to take in the views as well as hiking to the Stony Man Summit.
I arrived back in Abidjan on the Night of Destiny, Laylat al-Qadr, the most sacred night of the Muslim year. Prayer on this night, near the end of Ramadan, is “better than a thousand months”. The timing of the end of Ramadan is based on view of the moon. In Abidjan, following the sighting of Saturday’s moon, Sunday became Eid Al-Fitr (the end of Ramadan, traditionally celebrated by family parties) and Monday a compensatory public holiday. As usual, the women have to prepare the food. I suppose the men keep out of the kitchen and just go down the Mosque.
The month ended in a watery welter of repeated rainfall and stormy weather, which started to turn the walls damp and my clothes mouldy. I sent my suits for cleaning and kept the fans on and the windows open during the day, but it made little difference with a continuing humidity level of over 90%. Nights are interrupted by the constant growling of thunder and vast fountains of lightning. I shall be glad when the rainy season finishes.
Yours with gumption,
Lionel

Ahem As Europe falls into yellow leafswirl, brown mulch and[...] 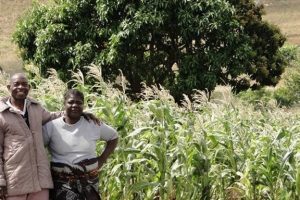 Today’s hungry could be feeding us all tomorrow

There are 2.5 billion people today who live and work[...]