Ahem
When my father was in Rome for a few days during his active RAF service in 1944 he wrote to my mother, then his fiancee, a letter every day (there being neither Facebook, Skype nor MSN at the time) and after his death I read in one of these letters his description of the Terme di Caracalla, where he wandered for an afternoon, as I did 66 years later on a quick trip to Rome. Thousands of Romans every day used the facility, which was essentially a multifunctional leisure center, built on eleven hectares, with a huge swimming pool, changing rooms, gymnasia, auditoria, libraries, fountains and statues, individual bathrooms, hair-dressers and massage parlors. It was an extraordinary experience to walk the quiet and manicured lawns and meander through the silent ruins with other respectful tourists with their cameras and headphones and realize what a prodigious and noisy hubbub must have taken place daily hundreds of years ago, memorably described by Seneca: “Just imagine all those voices, which make you begin to hate your own ears”. Completed in 217AD, the baths were functional for over 300 years until the dastardly Visigoths destroyed the aqueducts.
Early in the New Year we had a very enjoyable dinner at the McCoys, featuring turkey dry-rubbed and sealed then deep fried in a large vat of boiling oil. It sounds unusual but it was delicious, taking 50 minutes to cook in its own juices in the deep fryer rather than the several hours of the conventional oven method. At the end of the month, we went to a fine dinner at the Smiths, enjoying good company and seeing our friends the Smits, over in Basel for the weekend from England. We also went to a party at the sociable Anthonys, enjoying the liberal provision of champagne bought in France and stored in our garage over Christmas. I am of course a generous man, often making outright gifts to friends and acquaintances resident in Switzerland of whole boxes of fine wines bought in France in exchange for small pecuniary considerations and invitations to A-list parties in the Baselbiet. However, I must admit I was stopped at the frontier just up the road and subjected to a major interrogation for the first time ever at that border crossing, not about wine but about my identity. Incredibly I was able to produce my passport, frontier worker’s card, driving license and car documents to the young buck from the Reichswehr, and was allowed to pass after five minutes of checking. I thought I had been in a time warp. 25 years ago I was detained at Heathrow for three hours after correctly (and calmly) pointing out at the passport desk that as a UK passport holder I was not obliged to say how long I was intending to stay in the UK. “Them that ask no questions isn’t told a lie.” Talking of Kipling, Jessie left us to get back to Brighton for her second term at Sussex University. She has booked to spend more time in Basel during the Easter holiday, although we are apparently sharing this privilege with her friends in New York, Boston and Arkansas, her cousin in Nashville and her Ultimate Frisbee team members in Italy. Ella has had three more conditional University offers, and as each day passes she looks more like becoming a fully fledged university student in international relations later this year, as she will not be taking a gap year. A new boyfriend, Louis, has even been confirmed. She had a brilliant time at the school prom, and also spent some days at the end of the month staying with a family in Munich while Captain of the school’s basketball team, coming second in the tournament overall against eight other International schools. Gwen has also been playing basketball in the school’s junior team, travelling to Zug to play in a similar international tournament.
Recently the toilet seat in the ground floor bathroom mysteriously broke (I was nowhere near it). Given the overall quality of the house’s bequeathed fixtures and fittings, I guessed that a replacement would be neither easy to find nor cheap to acquire. Sure enough, when we located a replacement at a bathroom emporium in Basel, it cost the equivalent of £300. They had first given us the wrong order and were very apologetic, according to Alli, so along with the seat, the shop assistant had offered her at no extra charge an additional mechanism that somehow closed the seat automatically, softly and smoothly. He gave her a long thin package apparently containing this additional device. The task of installing the seat seemed to need ultra-precision tools, so I inspected the package carefully before starting and ascertained that it was in fact a packet of spaghetti. It had been offered to us in apology for the mix-up. Alli’s linguistic ability in Baseldutsch is now in doubt.
We have three dogs barking in the house. Bonnie and the daytime lodger dog Tequila were joined by Bertie the posh Cocker Spaniel for a few days, while his owners sojourned in England. The snow and ice returned at the end of the month, and especially so on one of the days when I had the car. It fell so suddenly and copiously that there was unexpected commuter turmoil auf Englisch for a couple of hours in the morning. I spent that time getting to work, negotiating spontaneously treacherous roads which the Swiss authorities had not yet made safe. It was like driving in a line of dodgem cars. Those without winter tires were in free glide mode and I must have passed half a dozen accidents on the way. But after all, it is winter, and a proper one at that, with wind, rain, snow and ice, as well as occasional and startling bright sunshine, promising a glorious spring. The house roof-beams whine and whistle in the night. And so we certainly have “no call for running out till the house-dogs bark.”
Yours watching the wall,
Lionel 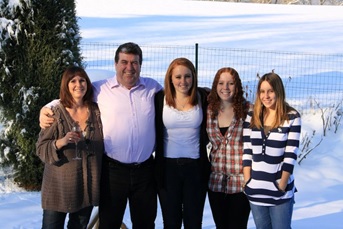 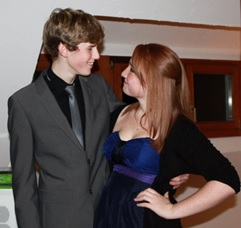 Ahem One of the many drawbacks of living in a[...]