As Europe falls into yellow leafswirl, brown mulch and bright red bonfires, search-lit by horizon sunbeams and long-man shadows, so by contrast the weather in Abidjan continued to be mostly cloudy, brooding, uncertain – sometimes bursting into waves of rain, and sometimes throwing down scorching days which drain me of vim within five minutes of going outside. I am forcing myself into a merry social life now that my work schedule has moderated from suicidal to tense, meaning that I have some weekends when I am almost free to do as I will, and my average work commitment during a typical weekend has fallen markedly. I have been eating out, once at the Ile Flottante, an artificial island floating on hundreds of plastic containers (bidons) in the Ebrie lagoon; and once at Le Paon in the Faya district. Both had broadly the same menu as most Abidjani restaurants: lagoon fish: Capitaine, sole or grouper (African brown snapper), chicken or mutton with rice, yam, chips or manioc. The real choice is of the sauces which range from peanut to palm grain, tomato, aubergine, manioc leaves, djoungle, black bean etc. In the past twenty-two months I must have eaten over a hundred whole fish (mostly Capitaine) with many of these sauces. I don’t know why such a limited choice of diet is universally accepted, when the region has such a variety of different foods available, but perhaps it is starting to change, although even pizzas are still novelties. I see new restaurants with more variety opening up, but not with prices that ordinary people can afford. Fruit, however, is plentiful and cheap. I like the sweet bananas, plantains, paw-paw, passion fruit, mangos, and pineapples. The avocados, when eaten ripe, are better quality here than from anywhere else I know. There is a Vietnamese truck-stop style restaurant near where I live which looks terrible from the outside and is frequented by the sharp-jawed hungry wôrô-wôrô drivers (crazy crash-happy cabbies in crappy careering cabs) who congregate, josh and shout there haphazardly for takeaways before jumping back into their dodgems. One wouldn’t go there on a date but the food is authentic and cheap, and even TripAdvisor has it listed. I did go out for a good Ethiopian meal one night and went again with a few more people a couple of weeks later for its buffet celebration of the Muslim New Year (it’s now the year 1440 by the way). At the end of his day of fasting one evening Mohamed brought his evening meal (the Careme) back from his mother, who had added a vegetarian dish for me, with salad, vegetables and fonio (“the new quinoa”) balls.

I went to a retrospective exhibition of abstract art and metal sculpture by Michele Tadjo, a French artist, in the Rotunda Arts Centre one evening, and met the late artist’s son-in-law, daughter and grandson in the process. In a macabre moment I saw a trail of bloodspots on the floor by the paintings, which didn’t seem to be part of the show but did feel like the beginning of a Midsomer murder mystery. No one else seemed to notice them, and I suppose it could have been drops of the local drink bissap, but it was a curious moment (I am half way through the Dexter series on Netflix, so I immediately thought of it as spatter). The next time I looked it was almost gone in the smudges made by passing feet, so the mystery was never revealed. One Saturday I went to the annual city grillade, supposedly a celebration of various gastronomic options. I was imagining a French style gathering of delicious food for eating and tasting from all over the country, with different new dishes and flavours to savour, but it was little more than a long line of identical cabin huts all selling exactly the same grilled chicken or fish with fried plantains and yam or rice, to a background of thunderous music and men shouting in distorted loudspeakers. I didn’t eat there and couldn’t wait to leave, despite having been keen to come. I had a more convivial time at a quiz night at Jardyland some days later, where my team surprised ourselves by coming second, and at a book club meeting where we discussed Zadie’s Smith’s book On Beauty, and I rehearsed my theory that there is at least as much Keats as E.M. Forster in the influences on this excellent book. 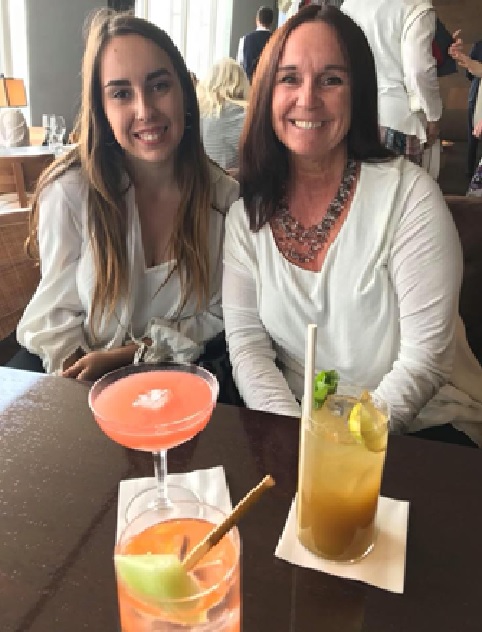 Gwen and Alli on top of the Shard, London, September 2018

There has been a lot of activity in the family which I was very sad about having had to miss. Above all, the relocation of Gwen, our youngest daughter, from Brighton to Askham Bryan College in York, where she is starting a university foundation course on animal behaviour, especially dogs. Her first assignment has been on the legislative treatment in the UK and US of pit bull terriers.

Alli went with her to get her settled in, and she is already enjoying herself in the city and in the work. Also, Jessie’s four-year contract working for the German Development Agency in Dhaka, Bangladesh came to a glittering end this week in a friendly welter of parties and presents and good wishes. I so wish I could have been there for the cheers and so glad that I was able to get to Dhaka to see her and Jurrat in their flat earlier this year for a few days. She will now be doing some traveling and starting to look for her next job. Ella has also been busy. Still working with the Food & Drink Foundation, she is starting to go to functions attended by the great and the good, and recently met Jay Rayner, who is a kind of family hero, for reasons I cannot remember. This followed a meeting she had some months ago with David Attenborough, another family hero. She is also maintaining an amazing level of fitness, running several miles a day and this month completed yet another (half) marathon. Alli’s birthday this month was celebrated in style, with Ella and Gwen taking her to lunch in London. Another piece of priceless family history that I have missed… But apparently the day was brilliant and so was the restaurant at the top of the Shard (see photo).

I am in limbo at work, busy on editing great batches of documents for the Board, but still extremely unsettled and concerned about my next move. I was surprised to be presented with a letter advising me of my compulsory retirement on the grounds of age next March (the Bank’s retirement age is 62), when my work contract states that my job officially ends next November. As to where I am “retiring” to, this remains uncertain, but it could be to almost anywhere in the world, according to the employment opportunities that I have been perusing (which include re-introducing myself to my previous clients at Clement Reputation). My daughters and best friends are even now dedicating themselves to searching for my next post as I twist slowly on my global rope. Do feel free to join this philanthropic search party on behalf of

yours truly between worlds,

Ahem To secure approval from the family, a box packed[...]