Comrades, I have made a striking yet politically disappointing discovery. Our cousins the hens, known amongst themselves as “chooks”, are coop racists and colour-prejudiced in beak and claw. Whether this affliction is institutional or genetic I do not know. Certainly the management has done nothing to encourage this revival of brutish and ugly recidivism in our own back yard. And how did we discover this? To put it bluntly, the four brown hens have taken against the two new hens, recent immigrants who happen to be black. Purely because of the colour of their feathers, the immigrants (perfectly legal and with valid work permits and licences to lay) are harassed and bullied, pecked, bustled and tripped by the self-styled “natives”. The victims’ pickings are leavings, their rewards grudging, their daily life is social evasion. And yet, thanks to our glorious new leader, a new dawn beckons (contd. on p.94)

I went to Indonesia for a week in the company of some French politicians and local embassy officials on a visit sponsored by the Indonesian government. Apart from having to speak, write and think in French most of the week, it reminded me of earlier days in which I trotted around after MEPs who were in pursuit of personal publicity. In this case the politicians’ habits were at once more venal and more worldly, but I must admit that I enjoyed the kind of work that I used to do for and in the European Parliament some thirty years ago. For half the time we were in the capital, Jakarta. For the other half we were in Sumatra, close to the edge of the rain forest that so many westerners seem to know so much about.

Once back in Basel I only slowly emerged from jet lag. But recovery was complete in time for our visit to England to go shopping in the Westfield Shopping Center in Stratford, see Ella and Sam, watch Jessie play Ultimate Frisbee, welcome our Belgian friends to watch a football match, and have a truly memorable Indian meal in East Ham High Street. The mighty Hammers kept to the script by beating Wigan Athletic 2-0, providing our friends the (male) Deleenaires with their first experience of a Premier League match as well as with surprise at the complete Indian ethnicity of the community around the Boleyn Ground. 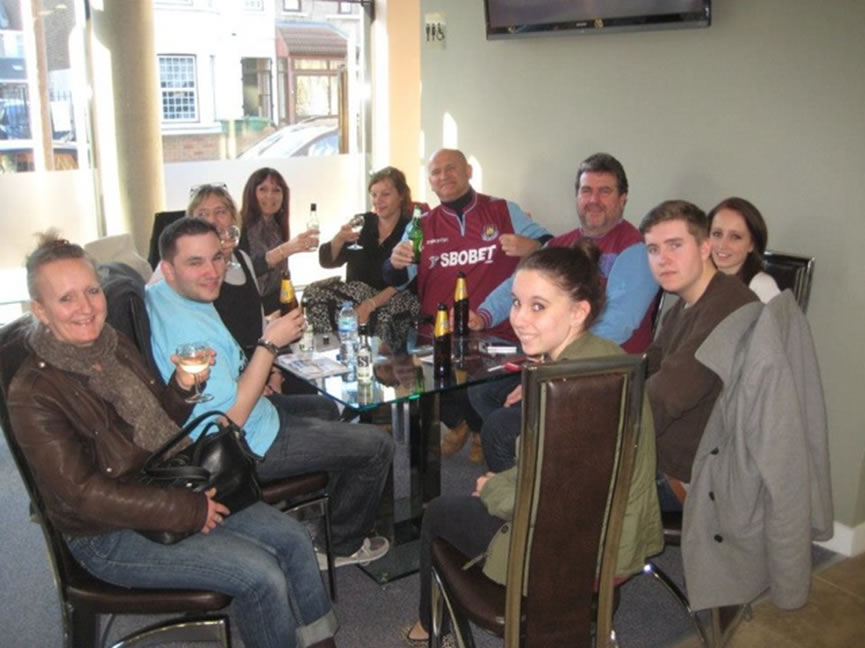 Celebrating West Ham’s victory, East Ham, April 2013 (the one not smiling is a Spurs’ fan)

On the Sunday I drove northwards to Nottingham with Ella and Sam to attend the British Universities Outdoor National Championships for Ultimate Frisbee, at which Jessie’s team, the Sussex University women’s team (the Squaws), became champions for the third year in succession, only conceding seven points over the eight games in the whole tournament. Jessie, who was elected the President of the Sussex University Ultimate Frisbee club this year, also completed some exciting plans for the summer. She will be spending three months in Bangladesh working on prison and justice reform in the cause of promoting human rights and preventing corruption for the German International Development Cooperation Ministry. To cap a great month of achievement for Jessie, she was also accepted for a Masters course by Sussex University next year in Criminal Law and Criminal Justice, and will therefore be staying in Brighton for at least another year. 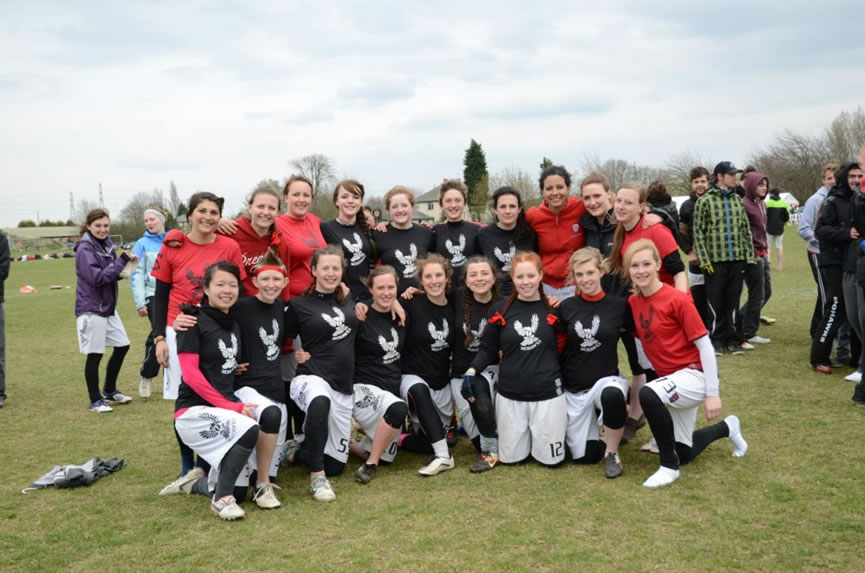 Jessie and the Squaws victorious in the Ultimate Frisbee National Championships, Nottingham, April 2013

I drove Ella and Sam back to Loughborough then travelled south, staying the night at the George Inn in Dorchester-on-Thames. Here was a fine welcome, a good room in a converted stable. I ate a full English breakfast while the morning sunlight streamed through a cut-glass window depicting Saint George killing the dragon. My day was spent discussing bee health in Jealotts Hill then I drove west through myth, magic and memory to Witney. The following day I met a client in sun-bleached Broadway, then motored back with metaphorical scarf flying along the great Fosse Way towards Abingdon, where I stayed with Andrew and Emma in Oxfordshire splendour, bonhomie and hospitality. The following night, after another day of itinerant working, I stayed with Andrew and Fionnuala of Enton Green and departed early enough for a trouble-free flight back to Basel. A couple of days later, we went to Zurich to see a below-par Eddie Izzard live in concert. I thought of claiming insurance but his performance was rated ineligible due to force majeure.

The Georgian aspect of the week was heavily enhanced by a dinner on the final Friday organized by Alli to celebrate St George’s Day. We had over fifty local anglophone people eating at L’Ange in Leymen, toasting Saint George’s health, and digesting a selection of English poetry and declamation offered by those volunteering to stand and deliver. One of the highlights of the night was a rousing rendition of “Norfolk and Good” led by Squire Peter of the Ferrette Morris dancers. The evening then became rowdy and choral in the best English traditions. In a particularly welcome spring surprise, Jessie suddenly arrived during the dinner, and will be spending next week at home doing some revision for her Finals, which are now imminent, and scolding me for drinking.

So all in all, comrades, I am bound to say “God for Harry, England, and St George!”