Summer has arrived and so have all those things related to summer that we tend to forget on an annual basis. Queues at airports and irritating airborne insects to name but two. Hailstones and torrential rain are not normally among these. Of airport difficulties I have been a recent victim on a few occasions. The aeroplane that was to take me from Brussels to Basel after a particularly uninspiring conference in Europe’s capital city developed a faulty wheel and so we were kept at the airport for nearly three hours while a new wheel was found (apparently driven over from Zurich and flown to Brussels by Swiss airlines). I was joined by a work colleague and a neighbour as we hung around Brussels airport for three hours after all the shops had shut. I even managed to have a good old talk with them about the chemical industry in Basel (they supplying all the details, me providing the rapt attention). We had cheese sandwiches and several bottles of Leffe in the business lounge while we waited for the plane to be fixed. Back on the runway and in the airport bus we stood for several minutes waiting for the doors to open and were agreeably diverted by watching a female mechanic quite literally change the wheel on the plane with a jack and a plug spanner (as if it was a roadside RAC job) while we sweaty businessmen stood and watched, orifices agape. I half expected her to finish the wheel job then wipe her brow slowly with a bottle of cold Pepsi Cola like the roadworker bloke in front of the awestruck office workers in the ad.

Gwen has been very sociable and recently organized a Fish party in her room one Sunday, a party which she had trailed for some days in advance by having put posters up all around the house complete with a form where we could sign our names to indicate that we were coming, and which she checked every morning and evening to see if anyone else had signed up. Alli and I went into her room and saw that she had put paper cut-outs of fish all around the walls. Her little tea set was also set out and we poured ourselves some tea and sat and admired the fish. One of them looked a bit strange for a fish: Gwen said that it was a blow fish. It was a very enterprising party and she invited us to admire and enjoy all the fish related things in the room. I also agreed with Gwen that she could organize a “Jungle Sale” on the following weekend. Gwen is very industrious and entrepreneurial. She is always organizing things in her own way, inviting us to eat at her restaurant or going to her supermarket or helping to write and design illustrated books, as well as, of course, the Fish Party. Afterwards, I said that I would take Gwen to the outside swimming pool down the road. Just as we were about to leave, her friend Catherine suddenly appeared at the door with her Mum. We had forgotten that Gwen had said that she would be coming today. No harm done, we all went to the pool together. Gwen and Catherine got on well at first but unfortunately Catherine could not swim so inevitably Gwen went off splashing around while Catherine was unwilling to do more than paddle in the pool. “An only child” said Alli meaningfully, as if this explained everything.

The Battle of the Bands has taken place at school. Jessie’s band Spent were the first up on stage. They were a bit uncoordinated, despite all their diligent practising in our basement, but it got slightly better by the time they started playing 2-4-6-8 Motorway, and the last song, Green Day’s Time of Your Life, was very good, especially as it was supposed to be a surprise for Carly, the lead guitarist, who was leaving for Australia in a few weeks’ time and who burst into tears at this imaginative and kind gesture. Spent did not, unfortunately, win the contest. A teenage US/Scandinavian grunge band did.

We have bought a large paddling pool and have taken some time trying to get the pump to work properly, but while the water seems quite clear we cannot seem to get the green tinge away from the floor of the pool. This tinge makes the water look dirty. My considered view is that the overall purchase, cheap as it was, was not fit for purpose. Lawyers will probably understand what I mean. However, it is also a cross-border purchase, which makes a difference. We shall see. This is likely to be a recurring theme as we splash our way through the summer.

Just after midnight one night, a huge thunderstorm right overhead awoke us abruptly with a crack in the sky and Alli went around the house shutting the windows and checking for any hands reaching down. Incredibly none of the children woke up. It rained determinedly all night, stopping just before I cycled to work, woozy and thinking very slowly. I managed at last to get away on the bicycle, bumping into a neighbour as he walked down the hill to the tram stop. “Oh My!” he said, looking at my knobbly knees and fleshy thighs. The weather was threatening throughout the day and I left at 6pm under another gathering storm, which broke exactly ten minutes after I arrived home. What a storm! There were large hailstones the size of golf balls crashing down, and I took the car out to pick up Jessie and Ella from their respective locations I actually wondered if the hailstones might crack or smash the windscreen. The rain redoubled its intensity when we were back in the house and it felt like a truly tropical rain storm. Looking out of the window it was hardly possible even to see the garden. Even as I now write, a huge electric thunderstorm has today been circling round and round in the valley and the rain has been torrential, with sudden cracks of thunder overhead despite the sunlight and constant rumblings like a distant giant motorbike rally in the leaden sky.

I have just had an extended business trip abroad, taking in consecutive visits to Brussels, Budapest, Zurich, New York and Philadelphia. It was particularly good to be back in New York City (the non-business stage). I stayed with a friend in the neighbourhood of the upper west side near Columbia University. Her neighbour had unexpectedly given her tickets for the American Ballet Theatre company’s production of Les Sylphides and Stravinsky’s Petrouchka, and so we took a downtown train to the Lincoln Center and made our way past throngs of people contentedly dancing the samba to a live band in the concourse outside the theatre. I had never been to the Met before and it was a great experience to be going to the New York ballet, which was lavish and confident on a European scale. Les Sylphides was enjoyable, especially the music, although I was not so keen on the very traditional staging, with one pouting male dancer and several white-frocked ballerinas pirouetting and tippie-toeing their way meaningfully around the stage. Petrouchka was altogether more exciting and colourful. We left at the interval as the time difference was hammering at my eyelids. We walked back through the gyrating crowds, still dancing happily in the streets in the warm evening as the live show outside seemed to be coming to a climax, and soon we were back on the train heading back uptown. Philadelphia was an anti-climax after that, but it was nice to see, for the first time in my life, the famous Liberty Bell. 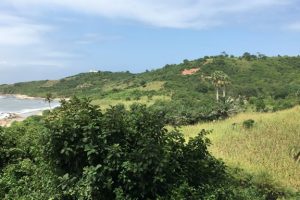 Ahem The couple renting our house in the south west[...]