We are in full fall. The legendary colours of autumn in Alsace have reappeared in the woods, lanes and country paths of the South Sundgau, signalling the advent of morning frosts, long afternoon shadows, days of mid-forest stillness, and the promise of even colder weather, lumpy clouds like French hotel pillows and the crackle of logs. Talking of which, the village Mairie told me that my pre-ordered two stères of wood were piled neatly in an ultra-secret location in the Hagenthal woods; all I had to do to get the wood from the woods was to match the number on my delivery slip to a small plastic tab attached to one of the logs in the pile.

I dreaded the prospect. Like many others, I attach myself only very uneasily to the hardy characteristics of logging, sawing, humping and stacking metre lengths of wood. But I sighed in a long suffering way, assumed my tough man image, and donned a long-stored hard-wearing pair of jeans and a lumberjack shirt which I had bought from Aldi largely as a film noir gesture of irony. Two hours later it was done. M. Wolff, the engaging Leymen woodsman, was even on hand to “stère” me to the right place (I couldn’t find the pile at first). After first checking that there was no one hiding in the pile, I loaded the logs into the back of Galahad and, sweating profusely despite the practically Antarctic late afternoon weather, tootled off back home, feeling like Sean Bean.

I took a couple of days to drive down to our house in La Hune, and most of the countryside between the Alsace and the Tarn et Garonne, including the Auvergne, the Franche-Comte, the Dordogne and the Gers, wore its best country clothes of yellows, reds, browns and greens. I used a car-sharing (“covoiturage”) French web site – blablacar.com. For a small contribution to petrol costs, people can get a lift coinciding with the route taken by drivers willing to take company on long trips – within 24 hours of placing the notice I found I was taking three people (two students and an actor) and returning with two (a soldier and a health assistant), none of them older than 21, and all speaking only French. But it was entertaining, even amusing at times: talk (blabla) is encouraged but not compulsory. On the first night of the journey I stopped too late to have dinner after dropping off the third covoiturier in Tulle and decided to stay in Brive in the Hotel de Montaubon, an old-fashioned place in the middle of the town where I had stayed on a similar trip earlier this year. The bathroom was a squeeze, the coverlets faded, the carpet threadbare, and the lighting dull. Nevertheless this was a proper old-fashioned hotel with a balcony onto the main square; it was old but clean and it suited my needs perfectly, for I was tired and did not need more. Who needs luxury when you can rest content? I wish more of these hotels remained in France (they are disappearing fast) rather than all the colour-coded “budget” hotels littering the routes into towns: mute, impersonal and expensive, telling nothing about the place where they are or the people who live there.

In Mansonville I introduced myself to Jarno, Milla and their family, who had already taken up residence in La Hune and started to make it look better after just a couple of weeks. Jarno and I went to Agen to get some heat pumps and paint, and I invited him and his family to a fish dinner at the St Saturnin. In turn I was invited to lunch a couple of times, and had several conversations about how the house can be further improved. I came back to Basel with the conviction that La Hune was in safe and capable hands until at least next summer.

I was hardly 24 hours in Leymen before I was back travelling again, this time to Trieste pictured above), Ljubljana and Pula, in Italy, Slovenia and Croatia respectively. I was there with others to identify new opportunities in communications advice and to see a friend who moved to Croatia last year, and has just started a travel agency in Pula offering chartered sailing holidays in the Adriatic. I had never been to the region of Istria before and it was a revelation, with clear roads, friendly people, impressive classical remains, great weather and lots of opportunities opening up for tourism and leisure activities, and especially for good sailing. And although I have no significant sailing experience, it was impossible not to feel excited by the view of new sailing boats under a clear blue sky in the spotless Marina Veruda just by Pula and to hear the call of the sea punctuated by the flapping of sails and the repetitive clink of rigging on the masts.
Another quick turn around in Leymen before Alli and I were off for a mini-holiday to Lisboa, staying in Carcavelos with our friend Julia, whom I had known since my administrative traineeship (stage) in Brussels in 1982. Julia picked us up from the airport and we sat over drinks in the bar of the Albatroz Hotel overlooking the bay in Cascais before having a great dinner of salted cod, octopus and cuttlefish in Carcavelos. Alli and I spent the next couple of days wandering around Lisboa. We visited St George’s Castle, built in the 11th century and the first Royal Palace of Portugal, with exceptional views across Lisbon and its harbour. We saw the Torre de Belem and the Monument to the Discoverers, and took a ride around the more modern part in the east of the city, much of which was built for the Expo 98. In the evening, another ex-stagiaire graduate of the European Commission from 33 years ago, Fernando, joined us with his partner for dinner in central Lisboa. The next day Alli and I went to Sintra by car and walked around the town, having lunch and also taking a coach trip to the castle on top of the mountain and the Parque de Pena, the gardens of the Royal Summer Palace from centuries past. Sintra seemed like paradise, a last breath of summer before the inevitable cold catches us all at the beginning of the year’s dark half. 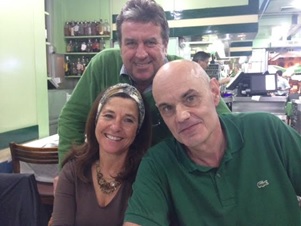