Ahem
The bureaucratic contortions of sending a dog from Switzerland to New Zealand indicate one of the most time-consuming assignments in human existence. Poor Licorice, our on-loan dog, finally got under way down under after several last minute cancellations and postponements, each of which put into doubt one, some, or all of the required injections, blood tests and other rather less salubrious exercises he had only just previously had to endure. This is as required for a country without rabies and with the strictest biosafety laws in the world from a country with rabies and the strictest approach to box-ticking and form-filling. In the final crazy few days Alli and our friend Nadene, operating from a 12-hour removed time zone, had to cope in real time with assorted Belgian and Swiss vets none of whom seemed to take full responsibility for all the checks needed so that Licorice could be legally conveyed to the land of his real family after a six month interregnum chasing deer. Anyhoo, Licorice eventually left one misty morning in mid-March and is now in quarantine in Auckland and thank goodness very soon to rejoin his long-deprived Kiwi family.
One Sunday evening we all went to Zurich to see the first concert in James Blunt’s European tour. The support act was billed as Grace, but she – or it – never came and when James Blunt appeared I suddenly thought that Grace was something he was not about to follow but to say: “For what we are about to receive..” Jessie has been extraordinarily busy for weeks as the stage manager for the school production of the High School Musical, a tumultuous event from its unpromising early rehearsals to its triumphant finish, exhausting apparently the whole school to such an extent that there were teenagers flopping around our house for days afterwards. Her friend David has also again been to stay. Choosing a university is a key task at present, and Jessie is to be seen flipping the pages of university prospectuses. Law at UCL is the choice for degree and college, and it seems a very good selection, especially with its family connections. I sagely observe that we don’t seem to know any poor lawyers.
Spring has arrived and there are bright flashes of colour everywhere, especially the canary yellows of the forsythia that have exploded all around us. The woods around are echoing with the low-toned hollow rattle sound of woodpeckers in the taller trees. Bonnie still bolts near and far in the woods but it can’t be nearly as much fun chasing deer without Licorice trundling around in approximate support. The major event of the month, however, was our eight days including Easter in the Turks and Caicos Islands, followed by three days in New York on the way back. We had accepted Clive and Julia’s kind invitation to stay in their luxurious beach house sited perfectly on the south side of Providenciales with memorable views and felicitous aspects. We made liberal use of Ivor’s pick-up, the swimming pool and the almost private beach. We had dinner out a couple of times (one occasion being our nineteenth wedding anniversary) and were afforded splendid hospitality by nearby friends and relations of Clive and Julia, especially Julia-Rose, daughter of Fleur and her first husband Matt, who took us all out one day on a motor boat for a beach picnic. Julia-Rose quickly struck up a talkative relationship with Gwen, based on collecting flotsam and marine life such as starfish, bleached driftwood, shells, sea slugs and sand-dollars. While the weather was a trifle fresh and breezy for much of our stay, it was a memorable and restful few days, made all the more enjoyable by the company of four resident dogs of sturdy character and bearing: Missy, Sammy, Rufus and Darren. Gwen played with Sammy for hours on the beach and around the pool. During our stay, we looked around the conch farm and re-visited other of the island’s tourist attractions, and spent some time at Grace Bay where the colour of the sea is a glinting deep sky-blue washed turquoise. Ella and I even managed to get in a game of tennis together at the well manicured golf club.
In New York City we stayed in the heart of Harlem at the apartment of Cassandra Perry, a schoolfriend of mine from no less than 34 years ago and now a preacher. Alli, Jessie and Ella were strongly determined to spend weak dollars while, bored by the prospect of shopping, Gwen and I made our own programme, meeting “Miss Jean” Leslie, “World Wide” Carl and “Uncle” Arthur in successive days. We went to an explosive installation by Cai Guo Qiang at the Guggenheim Museum and walked all over Central Park, visiting Strawberry Fields, the plucky sled-dog Balto, the Literary Walk and the Children’s Zoo. Together we all ate soul food at Amy Ruths, fajitas at a Brazilian samba bar, grits at Jimbo’s diner, sushi on Fifth Avenue and M&Ms on Times Square. Gwen and I chilled at the Lenox Lounge and splurged at Dunkin’ Donuts. Alli, Jessie and Ella joined the live audience of ABC’s morning chat show “The View” where some partly famous women (including Whoopi Goldberg) yammered together about slimming and bra sizes. Those of us without the need for a fitted bra couldn’t see the point so Gwen and I went elsewhere for waffles and chocolate cake. On our last night with my friend Donna we were serenaded by opera singers at the Cafe du Soleil on the Upper West Side while our respective teenage children all hung out together somewhere else. We were touched by magic. It was all like a fairy tale of New York.
Yours with beatitudes,
Lionel

Ahem To secure approval from the family, a box packed[...] 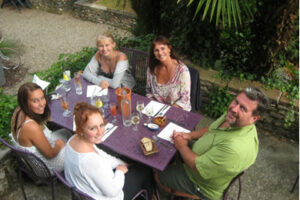 Ahem   There are some smells in daily rural life[...]