I have an admission. I live two lives; I have two loves. In real time every year since 1997 I devote over 11 months to one life and less than a month to the other. The shorter time is a holiday affair (it was ever thus). So, at the start of this month, I began again to indulge my alternate annual passion. I drove with Gwen, her friend Hunter and Bonnie the dog and we all camped overnight near Vichy on the way to our house La Hune in Mansonville at the southernmost tip of Gascony. This is the place where despite my passion I struggle between a vague sense of unshared responsibility about objects in the house (what needs mending, repairing, taking back, junking etc), general upkeep (roof, floors, garden, pool, fixtures, fittings) and the desire for a trouble-free holiday without commitments or responsibilities. I never get the balance right, and cannot relax until several days after I arrive. Until then I can be seen padding uncertainly around the vast halls like Garcia Marquez’s autumnal patriarch (only without the enlarged testicle), growing stubble, moving piles of books from one bookshelf to the next. Once I realize that the time is disappearing in which to make the annual mark of progress on the beloved property do I manage to become productive, and so just when we have to go home I am frequently in the middle of several brilliant local initiatives.

Alli has no such dilemma. She makes the very most of the sun and the pool right from the beginning, quite justifiably refusing the enticements of castle-viewing, market-wandering, respectful visits to the village’s many senior personalities, housework and food shopping alike. The problem was that this year there was less sun in evidence and so we all made more use of the interior than in previous years. We played a lot of Cluedo, Risk, What’s in the Bag, Spoons and many card games. Ella, who also did serious time on the sun-bed, distinguished herself throughout the holiday by doing the washing up on most days and the children generally helped with meals and their aftermath. The local food was again extraordinary and I must have cut up over 75 melons, all of which were consumed almost immediately. We also went out to dinner more, including to our good friends the Verdiers for an excellent paella, and to memorable meals at the Auberge de Bardigues and Les Templiers at Dunes.

We enjoyed spending time with our visitors, the McCoys of Muttenz, the Tallis-Locks of Forest Gate, and Sophia Miles, who was brought by her Dad, Alli’s brother Anthony. Jessie, fresh from her North American sojourn with friends in Canada, joined us after 10 days to make the family complete. In the mornings we visited the most colorful markets of the area. At one such in the first week, in Lectoure, I gave my keys to a stallholder so that he could make copies of one of them. Feeling efficient in the mid-morning sunshine, I cheerily agreed to return for the keys in ten minutes but then forgot to do so. By lunchtime I was wondering where my keys were and was unable to remember for at least 90 more minutes that they were with the stallholder, who had by then gone to his next gig, the Intermarché car park in Condom, thirty miles further south. Once I realized what the actual turn of events had been, I could, thanks to our good neighbors the Thouins, to borrow their car and retrieve my keys and their copies from the stallholder in Condom, while Gwen and Hunter had the run of Encarion, the Thouins’ mighty demesne in a nearby village. So, undeterred by the clear evidence that I had lost not only my keys but my marbles, I later proposed and agreed with Monsieur le Maire of Mansonville village to convert part of our land for use as the village site for pétanque (boules). I also had discussions with him and others about the possibility of organizing art courses in the house next summer. We had plenty of other visitors, including bats, two of which came into our bedroom through our open window in the middle of one night, and two tree frogs, who hopped every evening from their base in the pool alarm to the wall light on the house from where they feasted on moths and grasshoppers.

Jessie’s recent sky-diving exploits in New Zealand still pay dividends and she was interviewed by the water charity for whom she raised $1,000. The interview included the following masterful summary of a gap year: So you’re a traveler. Tell us about your latest: “I live in France now. I lived in Switzerland last summer, went to San Francisco for a couple of weeks to visit a friend, worked for three weeks in a law firm in the Caribbean. Then I came back to my new house in France for Christmas, went to New Zealand to work in the Parliament and on the way back I went to Singapore for a few days”. The full interview is on http://www.charitywater.org/blog/ctwskydive/. She also won the photo competition of her tour company in New Zealand “Kiwi Experience”. Back in Leymen, we were delighted to welcome my cousin Robert Apps for dinner one evening. Robert is on a major world tour and diverted to Basel in order to see us. He was in great form and we had an excellent evening with him. After spending the next week or so in France he will be joining his partner Caroline to take the slow route home back to Australia by cruise liner.

Here’s to broadening the mind, 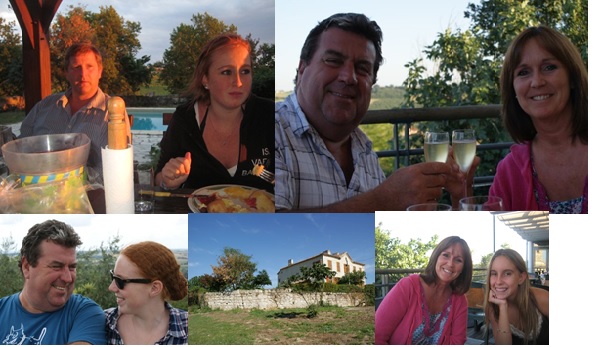 Ahem Some weeks ago while in France, I was dragging[...]

Ahem I can announce that I have crossed two major[...]