I divided the month of July between working in Rome and holidaying in South West France, with just a couple of passing night ships at home in Leymen. With my working time at a premium, I flew to Zurich after a full and stressful working day in a hot Rome, took the train to Basel and arrived exhausted, a man after midnight. Alli, Gwen, the dogs and I were then away the next morning on the road to La Hune. It was a long first day’s drive that taught me two lessons: 1. Don’t rely on the GPS of your mobile phone on long car journeys because it isn’t reliable and 2. Don’t back the car abruptly with a trailer attached to it. This last resulted in a severe dent in our car. Old established readers of Ahem will know that I did exactly the same thing four years ago with Galahad. Both our cars now have self-inflicted dents in the same places thanks to me, my memory and I. We stopped for dinner and overnight inAubazine at a quaint but creaking bed and breakfast, which boasted a Dutch version of Basil Fawlty as its manager, not quite coping manfully with the many demands of a small number of guests. Although it was billed as pet-friendly, dogs were not actually allowed anywhere remotely useful to them, and Bonnie was even banned from sitting on Alli’s lap after our dinner alone in the empty garden. A nearby sacred hill, which I climbed the following morning with the dogs, was of brief interest. At the summit was a numinous rockpile-strewn plateau with a religious statue. A shepherdess fell, or jumped, from that spot while being chased and was saved from death by an angel. It was a place for early morning runners and late afternoon pilgrims, and it had a great view.

Normally when we arrive in the haven that is La Hune, our experience is that all the known and reassuring items are safely in place. From mosquito plugs to can-openers, and from sun-cream to scissors, bath mats, tea pot and a coffee machine, useful things hardly noticed when they are there are badly missed when they are not. It was also the first year that our good friend Jacques, the famous protector of La Hune for nearly twenty years, had not been able to prepare the house for our arrival. Certain difficulties in the first few days were proof of how much we had been depending on his reliable service. 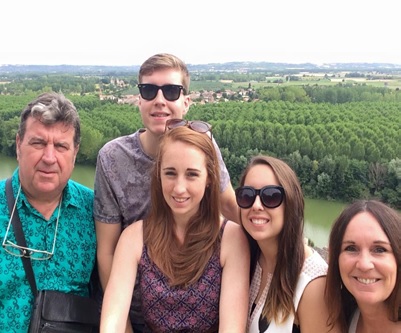 The water in the swimming pool remained cloudy for most of the holiday despite the efforts of many to clear it. It was clean but not, as the French say, “nickel”. It didn’t stop us swimming but it only very slowly cleared, even after Mansonville’s Mayor and I had changed the sand in the filtration drum and poured in large amounts of chemicals. Alli cleaned the garden furniture and the loungers, swept and hosed the terrace, weeded the lavender bed and by the pool, where only the dead roots of the weeds kept the tiles in place. I was not used to the new-fallutin’ fuse box and its intricacies, so it took a couple of days before we got hot water, thanks to the crucial assistance of another public-spirited village elder. The internet also had to be reinstalled after a mystery disconnection, and in the final days a badly leaking pipe was fixed by a jovial plumber in several hours during which he expressed his cheerful exasperation at the plumbing: “quel bordel y a ici!”

In between project managing, worrying about, and appearing to assist with these critical repairs, I joined in card games with Gwen and Alli, shopped in the swanky new supermarkets of Valence d’Agen, and joined in the unbridled consumption of the familiar local produce: ripe melons and figs, olives, plums, wine, tomatoes, garlic and many other delicacies. We also had a welcome visit from our friend Marc, who owns a generous domain down the road in theGers. Ella and Sam flew over from England to stay for a few days and joined us in the fine dining and the games, as well as visits to the honey museum and local markets. Sam also helped me to bring back a large amount of our books, pictures and other items stored in themairie with the kind assent of the previously mentioned Monsieur le Maire, Christian Berthet, who must be one of the most selfless and hardest working municipal officials in France. I first met him in 1997 when, as the local policeman, he was called to the house, then in pristine ruins, where my father, in his first proud saunter around the newly purchased domain, found a gun hidden in the bushes, apparently of World War Two origin. He thought the gun was genuine and alerted the police. Cue the future Mayor of Mansonville with cub reporter and photographer in tow. The photo that ensued showed baffled French bobbie and quizzical English landowner looking at what turned out to be a toy gun. The newsprint recording the event is now ochre and crisp at the edges. 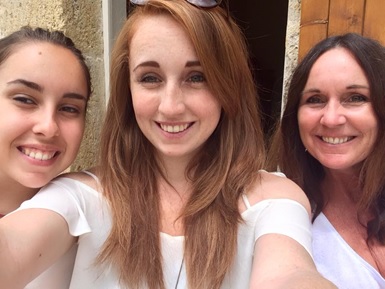 We drove back to Leymen on a different route after dropping Gwen at Toulouse airport for her plane to England, and stayed overnight near Lapalisse in the steaming heat of the hottest spell of the season, before getting back the next day to discover that our pool also needed close attention after a machinery failure had turned the water green. Alli, whose knowledge of pool maintenance is better than mine, got straight onto the case. The next day I was on my way in the blurry heat via Zurich to Roma, where I arrived again past midnight and completely exhausted, but to a warm welcome from Fionnuala, Evelyn and Andrew, for whom I have become the proverbial bad penny. Alli had more guests for her bed and breakfast service, and was delighted to welcome Uncle Nick and his children for a few days.

I resumed a lodger’s life in the Roman suburbs with Fionnuala and Andrew, troubled only by the commute around Rome’s circular motorway, the GRA. I feel no urgent desire to venture too often into the centre of the city at the weekends in such heat. But I spent one Sunday walking around Fiumicino, the Roman coastal suburb, looking for a suitable pied à terre, during which I entered a bar, dramatically wiped my brow, and asked for “birra”. Two minutes later I got it: warm pressed pear juice. There is a comfortable feel to the old fishing port of the town with its sense of lengthened and stretched time, white hot afternoons and sharp shadows, old men with snow-white hair slowly repairing fishing lines. No one moves much or fast, and the big blue languorous sea, large, flat and relaxed, stretched its limbs out down the boulder-strewn coast to confront torrid, teeming masses of constricted sunbathers on the minuscule shoreline, looking like packed baby mice with tiny party umbrellas. I had a sensational lunch in a corner of the old town with soup, figs wine, and perfectly cooked seafood for under 20 euros.

Gwen’s departure for England from Toulouse was momentous. She left to take a course with the admirable UK National Citizen’s Service, and also to work as a weekend volunteer for the RSPCA, having now left the International School in Basel. She had an excellent final term’s report which showed that she had studied hard and well in her last year and so deserves her chance to take the higher level subjects of her choosing, notably photography, geography and nutrition at Varndean School in Brighton this September. She is driven and decisive in her choices, understands and enjoys the challenge of the new, and is heading for success, especially if measured by determination alone. Alli and I are therefore becoming empty nesters rather abruptly from next month, with Gwen in Brighton, Ella in London and Jessie in Dhaka. The Stanbrook Family Facebook thread glows hot by their absence, like the weather

from under the air conditioning,

Ahem Modern global media seems to destroy more than it[...]