My last few days of the year at work saw a definite improvement in my social life. This had absolutely nothing to do with getting a negative result for my first ever (to my knowledge) HIV test, offered to all the Bank’s employees every year. My hearing was also examined and found normal, much to the surprise of my wife and daughters. The social renaissance included an office party (a very rare event) at a posh pizzeria, a Christmas lunch with the President’s cabinet, an entertaining quiz night at my favourite bar the Jardyland, and an eccentric soiree in Vallon for the far flung members of Cote d’Ivoire’s mining sector, featuring roof dancers, fire eaters and an amazing troupe of West African drummers. I also attended the British Embassy’s homey “carols by the piano” with sherry, mince pies and vin chaud, and discovered Bingerville’s relaxed colonial botanical gardens where I spent a couple of hours walking with a friend and her Husky, far from the tensions of last month’s encounter with a rabid Frenchman.

I also managed to get some of the many loose strands of my life tucked away, and these minor triumphs, together with the proximity of a three week holiday with my entire family, had the combined impact of chasing away the blues. The little wins included the satisfactory denouement of something that had bothered me for decades: the location of proof of my MA (Oxon) entitlement, which I had airily added to my CV for hundreds of job applications since leaving college. But upon starting work here in Abidjan a year ago I had been challenged to produce proof of the claim. (I see that Masters are now demanded of practically all professional jobs). The reminders were getting more urgent as my memory faded to grey about what I had done when I left Oxford, a libertarian radical with heavy metal tendencies. When I thought about it, it seemed unlikely that I could have meekly applied for the free academic addition to my title that Oxford even now continues to offer its graduates. Certainly I had never seen any proof of my “Masters” and I had a nagging feeling that I had heroically refused the offer of privilege, like Rudyard Kipling, Stephen Hawking, David Bowie and others when offered their knighthoods. In trepidation I eventually phoned my college and was told that I had indeed been granted it sometime after graduating but I hadn’t acknowledged it. In fact there was no “it” to acknowledge; Oxford did not then offer documentary certificates (presumably they were seen primarily as figures of speech). With this welcome evidence that I had not told a lifetime lie, and neither negated my honour nor impeded my career, I accepted the offer of a certificate through the post and received the simple document a few days later. As to whether the world’s employers know of Oxford’s crafty game, I am not disposed to discuss, least of all with those people around the world whom I have dutifully served in a professional capacity. My conscience, belatedly, is clear.

Pre-Christmas was spent in our unsold house in Leymen, meeting friends Martin and Jane for a cup of tea in their fast-emptying house (now sold), seeing Richard briefly and randomly in Basel’s Mitte, as well as an evening of joyful uproar and tales of life together with raconteurs Nathalie and Wynne. Alli, I and our dogs Bonnie and Max (complete with their dog passports) then travelled by car in the driving rain across the breadth of France through the Channel Tunnel to spend Christmas with Laurie and Kay. We were very fortunate to have our three daughters Jessie, Ella and Gwen and two of their boyfriends Jurrat and Sam, together with us in Sussex. We went to a Christmas panto in Crawley (the Hawth) to see Snow White and the seven dwarfs, and spent many hours in the spacious house playing card and board games, walking the dogs – mostly in muddy fields in locations well known to our previous dogs Basil and Jasper 20 years ago, eating cheese, chocolates, and Gwen’s vegan mince pies, drinking wine, and meeting friends. Ella came with her brand new full driving licence, having won the Stanbrook Daughters’ Prize for first legal driver on the road, and had even managed to borrow someone’s Mini for the holiday. This gave an extra option when it came to small errands and similar journeys best taken in a Mini. With most of the Talbots of Keymer, we had an excellent and long overdue reunion and lunch at a rain-swept Devil’s Dyke, and received a much appreciated visit from cousin Debbie from Poole. The weather was Englishly atrocious throughout the period, and I found that despite layers of clothes I was often cold, a temporary legacy of spending the previous twelve months in temperatures that never went below 30 degrees C. We went to Brighton to see our flat, currently Gwen’s residence, meet and agree terms with her new flat-mate, and had lunch at the Pond pub. And we were delighted to hear that Gwen has been accepted for a university place to study canine behaviour and training at the University Centre Reaseheath in Nantwich, Cheshire, starting in September.

We went up to London twice to see shows: the musical Matilda, which was very enjoyable, and for which the tickets had been bought by our daughters, and the very engaging Girl from the North Country, with music and lyrics by Bob Dylan, also bought for me as a present from Ella. With Ella and Jessie, I was very happy to see my friends Adam and Angela and god daughter Eleanor briefly before the show. Jessie bought me an ancestry DNA kit which seemed to propose a tall story but I duly sent off a saliva sample and will get back an assessment of my chemical DNA, although I am unclear how it defines “English”, “Welsh”, or for that matter “Polish” or “American”, being nationalities rather than races (itself a scientifically doubtful concept), blood groups or DNA types. I think on the whole I would prefer it to find me 100% European. The presents I received showed research, creativity and sensitive forethought from the family: books, light clothes suitable for the tropics, headphones, CDs and show tickets. For the second year running Alli and I woke up to find that Father Christmas had left filled stockings for us as well as for our daughters. I was particularly pleased with an unusual leather spectacles case from Gwen. I went up to see Fionnuala, Andrew and Evelyne, newly settled back in their Surrey residence near Godalming following nearly four years’ hard labour in the north of Rome. I stayed overnight after a good dinner with predictably fine wine and before a very pleasant walk around the Enton Green ‘hood, for once avoiding the rain, and ate lunch at the Dog and Pheasant, an old fashioned pub nearby. Alli couldn’t come as she was suffering from a virus that swept through our family and friends throughout the holiday. It was around then that I discovered with disappointment that the British middle class’s favourite cheese, Cornish Yarg, was named so not because it was discovered in some mouldy tin mine by historic Cornish-speaking sons of toil, but by spelling the surname of the creators, named Gray, backwards. It was created not in 1829 as I had thought but in 1982, although the recipe is implausibly said to date from 1289. Nevertheless, we drove to Tunbridge Wells for the re-enactment of a truly traditional friendship ceremony practiced often in the 1990s: New Year’s Eve with most of the Davises and Gardners. Nigel cooked superbly and the company was highly entertaining. Sated by the Davises’ generosity, we drove back again the next morning through the rain to pack our bags and give our grateful thanks to the eternally tolerant Laurie and Kay for their generosity and hospitality before taking the long and doleful drive back to Leymen the next day. Saying goodbye to the girls was particularly difficult, but made incomparably easier by their positive approach to everything, from which attitude I am always learning. I look forward to the glorious possibility of seeing them next sometime this summer.
The weather of early January is always shocking in some way – it forces its way into our consciousness, blowing, blasting or sweeping away the previous year. We were abruptly assailed by a full blown latitudinal blizzard of snow, rain and ice which seemed to warn me not to go back to Africa. Or perhaps it was telling me to go back – my time on the outside was over and my number had been called. Either way, after a day of slow preparation I took a late afternoon flight to Brussels for the next morning’s plane to Abidjan. The office emails were already piling up. Overnight I stayed with my old friend Brian who treated me to a last lavish dinner in Brussels and introduced me to his sparkling Spanish wife Maria, and to two spoilt but adorable golden brown retrievers and a very comfortable house. We talked about cultural irredentism and old acquaintances and tried to finish a rare bottle of Irish whiskey, but thanks to our failure to do so I had a comfortable last night’s sleep in old Europe.

Finally, I stepped off the plane on a late afternoon in the third world, into a city arthritic with millions of cars and buses, all shrouded in the warm blanket haze of the Harmattan and over-heated by a pale sun in a clagging mist. I realised that I couldn’t be further from home than if I had tried.

With my heartfelt best wishes to all my friends and family for a successful, healthy and happy New Year.
Lionel MA (Oxon) 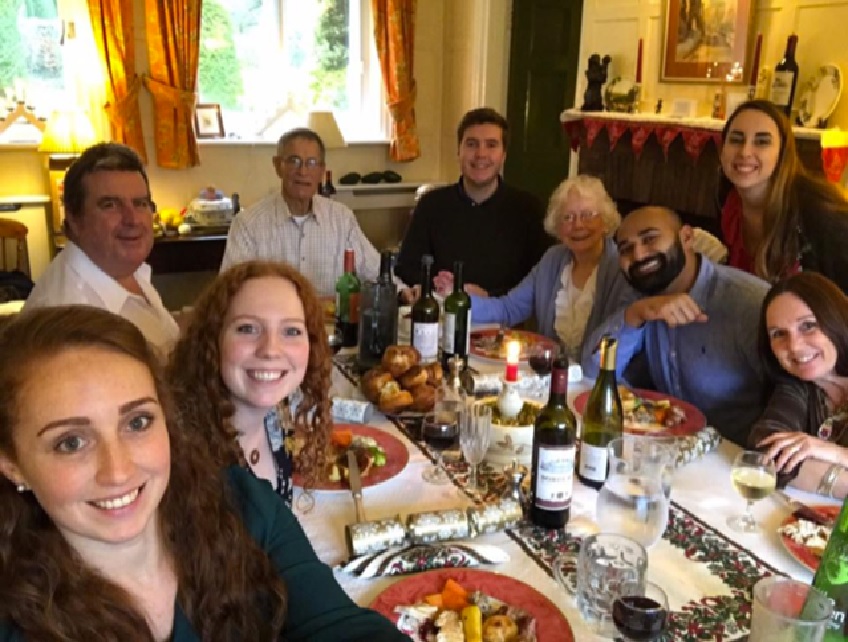