Ahem
I have been to the Royaume Congo, a famous nightclub close to where I first lived in Abidjan. After warming my hands by a fire of cartons, pallets and other street rubbish outside on the corner, I listened to some energetic Congolese Rumba with some Ghanaian friends. I enjoyed the music although the place was a bit small for any actual movement. We were also told after an hour that we had been in an area reserved for others and that we had to move, presumably for more important people. This annoyed my Ghanaian friends and we left in high dudgeon for a final drink in the bar opposite, where the music wasn’t live but Osibisa videos on the TV were a good alternative, especially as we had earlier been talking about the prowess of Ghanaian musicians Teddy Osei and Sol Amarfio. The following weekend I went with a friend to Jacqueville, where I visited an unusual beach and accommodation area called the Presqu’ile du Christ. Established by a pastor, the self-styled manoir is used for weddings, ceremonies and getaways. It’s a picturesque haven of calm, surrounded almost entirely by the sleepy lagoon, attached to the mainland only by a narrow peninsula path. It looks just right for a completely relaxing weekend sojourn with a book or a stack of blank paper. 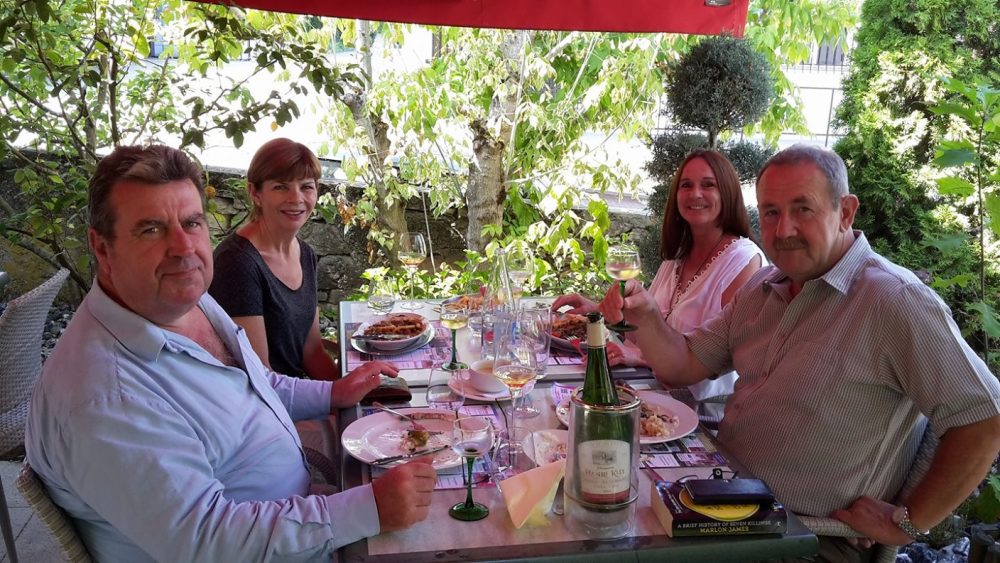 I went with the President’s delegation for an official visit to neighboring Ghana, which, to the very day, is as old as me, having been reborn as an independent country at midnight on 6th March 1957. A highlight was the meeting with the new President whose full moniker is President Nana Addo Dankwa Akufo-Addo. Nana has a cut-glass BBC English accent and speaks with rolling Churchillian cadence. He had twice before been a close runner-up for the Ghanaian Presidency, and helped to preserve the peace of the country by his immediate acceptance of defeat on both occasions. We also visited a chocolate factory (actually a cocoa processing factory, but bars of chocolate were handed out) at Tema Harbour in Accra. The harbour, which now handles 80% of all Ghana’s external trade, featured in one of my very first picture books as a child. It was a sepia photo of the port under construction, placed next to a photo of the Kariba Dam in Kenya, both built by the British in the 1950s.
The pace of work slowed through August as staff thinned to take advantage of the holiday period. At weekends I took to walking for hours around the immediate locale of Danga, finding that the lower seasonal temperature (generally under 30 degrees) made this just about possible. It is endlessly fascinating to walk through Abidjan’s local neighborhoods, especially the hilly south part of Cocody, a mixture of old poverty, new money, half-built houses, chickens, and potholes. Walking randomly, even with maps, is complicated as the higgledy-piggledy town planning means that there are frequent and surprising culs de sac, even within a stone’s throw of the big clogged highways to which access is not possible. If it was, the mini-neighbourhoods caused by the culs de sac might have more income from passing trade. As it is, there are many suicidal vendors who stand in the middle of the three line highways improbably offering anything from monthly historical journals to umbrellas, windscreen wipers, plug spanners and banana chips. But the city’s inhabitants, although plagued by poverty and want, are always friendly, and enjoy spontaneous conversation with passers-by such as me, often telling the history of this or that building that I have stopped to look at. In over nine months here so far, I have never experienced one split second of concern for my personal safety. People are completely uninterested, benignly curious, or bubbly-welcoming as I trudge past to my next bagbottom.
I had some hospital tests to ascertain that I was still healthy just before I left for France, although these took place in a whirl of mutual misunderstanding and confusion. I also bought an old second hand car, taking advantage of a tax-free allowance on customs tax that would otherwise have expired next month. Against all the odds, the car is a Jeep, my least favourite marque. I hope that I will have better luck with it than I had with the last one, which was a financial disaster. I was kept exceptionally busy at work right up to the last moment, and worked 16 hour days for the final six days, which included a bank holiday and a weekend. The time came for my flights to Basel via Brussels and Munchen, and of course everything seemed to build up to complicate the last day, as if “these things were sent to try us”: hospital tests, car problems, a sudden request to write a major speech on African agricultural prospects without briefings, the late delivery to my apartment of hand-made furniture – a wardrobe, desk and tables, and a rush of other sudden obligations. But I had given myself a full day to organize and pack after leaving work, and I put it to good use by taking it slowly, and so I strolled into the airport – a model of calm, collected, and cool.
At home the dogs Bonnie and Max expressed no inordinate surprise at my arrival (the welcome was similar to that for the ailing leader of the pack who had been endurably absent for an unspecified and unexplained while – this definitely had a hint of Nigeria in it) but they seemed pleased enough to see me as the Facebook video duly recalled. It was great to see Alli after five months and Gwen, over from Brighton, after eight months. My family life has been desolately virtual for so long, comprising occasional posts and photos on a social media thread. It was a curious sensation to be at home after so long away, and to know that the house was about to be sold. Unfortunately, during the ten days I was there, it became clear that the sale was not going to happen as agreed, despite the contract having been signed. Our buyer suddenly disappeared. We have therefore had to change plans on the hoof, even as we spent the week laboriously emptying the house of nearly all the furniture in the spare bedrooms and garage, either sold or thrown away.

The week before our long-awaited sailing holiday in the Adriatic we spent some time in the sun over lunch or dinner with our nearby friends: the Barneses, the Jarvises, the Richardses, and the Morrises (all our true friends have plural surnames). I also returned to forgetful form by leaving my mobile phone and passport at the St Louis bank where Alli and I had a meeting after I arrived back. The items were kept for a week while they apparently waited for us to collect them. Fools! The possibility that they were at the bank had not occurred to me for days until the eternally enterprising Jessie somehow established from The Cloud that the phone had given its last SOS nearby on the day of the meeting. I thought I had thrown them into the dechetterie by mistake. Meanwhile I was suffering from extreme worry, downheart, and guilt, set to the arrhythmia of high blood pressure, racked by insomnia, and spooked by a long juddering drive to Berne for emergency travel documents. The British Embassy, which inexplicably looks like a debtor’s prison, barked at me on the intercom that my wife had found the passport and that they would not let me in. Not for emergency resuscitation. Not even for a cuppa.
Don’t worry, I told them. I’m fine now. We’re going sailing.
All aboard!
Lionel Stanbrook

Ahem, Gwen arrived back in Basel after spending a few[...]