A proud father reports: Gwen has been winning medals in the swimming pool. Two from two races, to be precise, at the Roche swimming pool during the 8th Annual ISB swimming gala on the first of April. She won her first after a flying start diving into the pool for the 25 metres freestyle. She was second in the next race and ended the morning with gold and silver medals, doubling her lifetime collection of swimming honours. It looks like she is going to be as Jessie, highly competitive, single minded and combative. Jessie has no less than a hundred and thirty four swimming medals of one sort or another (we counted) so there is some way to go for Gwen but I can report that the project has certainly started. There is not going to be a dull moment with Gwen, and we can see already that she will be a very determined swimmer. I can also see whole weekends looking at crowded swimming pools beside which I am imprisoned between shrieking Mums urging on their children in galas at various localities. I went to many such galas with Jessie over several years around Southern England over the past several years. Jessie has this year finished competitive swimming, a well merited retirement after a successful stretch, and just as Gwen gets going. Alli had to take Gwen to the hospital last weekend when she landed hard on her back while competing with other children to see who could swing the highest. She was, fortunately, just bruised but did manage through her pain to observe that she had still swung the highest of anyone (before she fell).

I have done a lot of clearing of weeds, brambles and branches in the garden, piling the debris high on the car parking space by the garden and it was promptly shredded by the local Council (how’s that for a local service?), providing more space for me and my neighbour to make another huge pile of weeds, brambles and branches also to be shredded. English-style bonfires are considered to be environmentally harmful here in Switzerland, so the garden refuse has either to be shredded, composted or taken away. It must be a job creation thing. The grass has been cut (by Alli) for the first time this year and we have dozens of salamanders in the pond as well as two goldfish, who for some strange reason did not trouble to make an appearance at all last year. It would be nice to emulate this: “Hello, is that my office/pond?, Just to say that I won’t be in this year.”

I have been in Chicago, on a conference about biotechnology featuring lunch with ex-President Bill Clinton. The hotel was in a good position, next to the river as it joined Lake Michigan and the view from my sixteenth floor room took in many of the famous skyscrapers of Chicago as well as the lake and part of the park where there is a striking new theatre built as a kind of modernist amphitheatre. The Chicago waterfront is now vaguely reminiscent of Barcelona. Due to a misunderstanding with my office I found myself on call both in Chicago and, through the night, from Basel. I didn’t sleep much for several days. But you will of course be interested in my lunch with Bill. I was sitting directly opposite him (not an inch more than a hundred yards away). I played at my roquette salad while listening to his speech. He probably gave the same one everywhere and in more or less any and every context. Sometimes he dropped the word “biotechnology” into his text but he hardly mentioned the subject of the conference and trotted out some awful clichés mixed with some breathtaking inventions about the apparently massive success of his own Presidency. Half way through this self-directed paeon I left abruptly for the airport where I was promptly given an upgraded ticket to the first class compartment, the first unrequested (or indeed requested) upgrade that I have received in nearly thirty years of flying. I luxuriated in the luxury on offer but did not make the most of all the possibilities. I did sleep for at least half the flight although in doing so I missed all the meals. While awake I couldn’t think of what to ask for. It was very pleasant but in a way rather embarrassing to be made to feel that my every request would be granted.

I had not been back 24 hours from America before, under a threatening sky, I drove in tandem with my brother and sister in law and our families to Europapark at Rust, in Germany, a theme park that according to the girls is better than Eurodisney. Gwen, with whom I spent much of the time, was enjoying herself tremendously and wanted to go on all the scariest and biggest rides. She could not go on the Silver Star Ride because of her height so I took her on the EuroSat ride which was quite scary, especially as much of the downward rush was in pitch dark. Eventually Gwen went on this ride four times with different people, including her Uncle Anthony. The Miles stayed with us afterwards over the Easter weekend and we went to the zoo on one of the days and also visited the village of Mariastein, followed by a visit to Landskron Castle. From the castle there was a panoramic view across Basel to the north and we could see right across to the mountains of the Black Forest. We used our metal detector for a while on the grounds outside the castle and to our huge delight found a large rusty bolt after much scrabbling around with our fingers. I have also done another big hike around the Swiss-Italian Alps near the Gotthard Tunnel with the Housemen group. 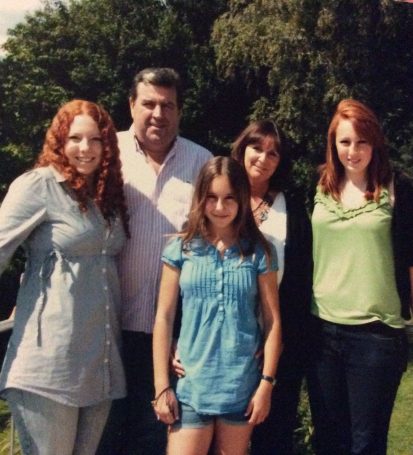 Yours with cotton tails

Ahem When I work from home my window on the[...]