Ahem
A brilliant idea jump-started September: a swim in the Rhein. After the warm late summer weather prolonged the opportunities for Basel’s time-honoured Rheinschwimmen, I joined the Barneses for a leisurely and warm float downstream in the elbow of the Rhein. Almost no aerobic movement was needed, as we were soon barrelling past the Munster on the current. My only real physical exertion was to tack urgently across the current to disembark at the end to disembark. After Gwen showed me a video about the benefits of juicing, I have also been on a juice regime. Drinking raw vegetable juice, for example beetroot, is naturally sweet and surprisingly filling. However, hours after heartily telling Gwen I felt hale from my juice diet, I was laid low, infected by overweening enthusiasm and overlooked bacteria. Made bold by early success, I had bought and partially consumed in juice form a wheelbarrow-full of muddy industrial mangelwurzels from the local farm shop, innovatively adding thick spotty stalks from shot lettuce and unidentified greens, but I could not have cleaned them properly. In short, I poisoned myself. Pride before a fall. After two days of someone stamping on my stomach to the accompaniment of a drunken brass band tuning up under bombardment, and related physical outcomes, I gradually started to feel a bit better and a lot wiser. The garden (where my experiments have been a little more successful) has been receiving more attention in the better weather with plenty of weeding, staking and clearing. Tomatoes and chilli peppers have proliferated despite the sudden weather changes and the potatoes are now ready and taste just like Jersey Royals. There are some misshapen carrots. I trimmed, hacked and partly freed up a pine and other areas embroiled by rascally and ragged wisteria winding and running round the rockery. I was trying to ensure that the half that had run the wrong way was cut back without damage to the other half that needs to squirrel neatly along the fence. 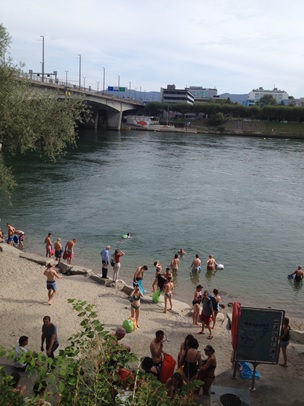 I was reversing our better car out of the drive with my usual breezy brio, checking the wing mirror rather than the back mirror when I clunked heavily into the front left corner of Galahad, (our 18 year old Galaxy), which in all its years of faithful service to my many hare-brained sorties and sojourns had done nothing to deserve such an unprovoked assault. The impact dislodged its moulded plastic frontal arrangement, leaving it askew like broken teeth or a jaw knocked out of kilter, and making it even more difficult to drive than it had been before. There is also a major crumple in the back right corner of our slightly less old VW, which providentially needs nothing more than a outwards bash (as in the last two incidents, when I abruptly introduced the side of each car to a forgotten but attached trailer while reversing). But I’ve been ridiculously fortunate with my car accidents over the years with only self-inflicted damage, and cheaply mended (or left as a scar).

To celebrate Alli’s birthday, we lunched with Gwen in the garden of the Cantina Toscana in Therwil and had an excellent evening and dinner with the Jarvises at the Restaurant Bellevue the day after. We also managed another all-family trans-global Skype session, after Alli had opened a diverse and eclectic range of sensitively chosen gifts. The following weekend we enjoyed a morning’s 10k Marche Populaire with the Jarvises and Jasper around Largitzen in the Sundgau in the land of a thousand lakes (we walked past dozens of them in a couple of hours). The same afternoon we ambled down our own road to a very enjoyable pool party given by Constanze and Paul, who have spent more than a year carefully and stylishly restoring their house to complement its superb positioning across the fields from ours. Even trying to be fashionably late, we were the first to arrive. We were not the last to leave, but we had the unhappy impression that when we got home the dogs had been barking for the whole time we were away. The next day, Alli took Bonnie to the vet to have her teeth cleaned, a Swiss canine custom. She (Bonnie) came back shell-shocked, woozy and wobbly. Alli was already unhappy with the vet for mixing up the times of the appointment so this won’t happen again; the daily dental sticks will just have to do.

I flew down to Toulouse to catch up with progress at our house in Mansonville, where solid work has been done on the centuries-old garden wall, and staying at the local hotel where I also saw Jocelyne, the hard-working proprietor, and some of the locals. It was the weekend of the harvest moon, and I took a photo of it from the terrace of the hotel across which I padded barefoot at 2early o’clock the same morning during a sleepless night. A harvest moon in a photo, I discovered, will seem to be in front of the telephone wire against which it is pictured. I have been offered a contract to advise on communications for an African financial institution based in Abidjan, the Ivory Coast. The commitment means frequent trips around Africa from the New Year, and promises to deliver a distinctly unusual and new set of experiences. Alli and I are considering all the opportunities that may result from this. It was matched by the excellent news that Ella has got a new job, beating hundreds of others to a post at the Food and Drink Federation in Covent Garden, starting before Christmas. She also went with Gwen to a live audience preview of Malcolm McIntyre’s Autumn television show. Jessie has been on a trip to Myanmar with Jurrat and Will, in which the highlights were their exploration of the majestic temples of Bagan and a two day trek from Kalaw to Inle Lake. 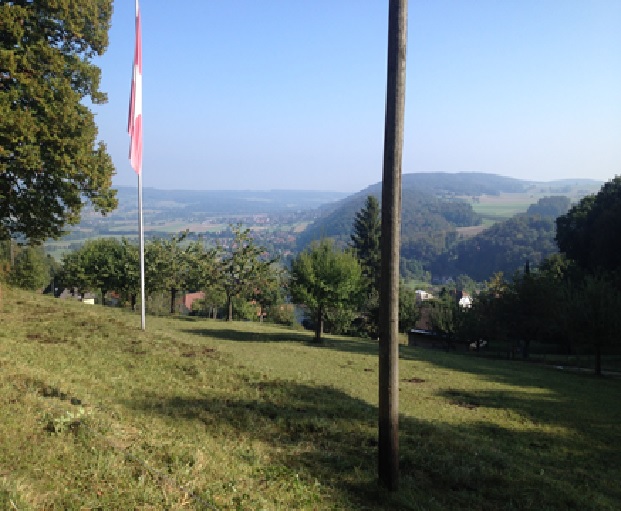 The Leimental from Burg, September 2016

Alli and I went on another Marche Populaire in the company of the Barneses and Jarvises in the countryside around Burg and Biederthal, only a few kilometers from our house. Although it was a sharp climb at the start, the views from the heights of Burg of the Leimental valley were particularly memorable. Bonnie and Max probably enjoy these walks even more than we do (and they don’t care about the views), but we have to keep an eye on them as they charge after all animals from a cat to a deer without warning. Bonnie shot off at one stage after sighting a small goat, but her full pelt slowed when she rounded the corner and realized that the goat was the smallest of a big flock of larger goats, munchingly unperturbed by the sight of a small squirrelly dog scampering towards them. After finishing the walk, we had a good lunch together at the Auberge de Neuwiller. We are lucky to live in this corner of the world.

Yours in the clouds,

Ahem, My parents-in-law Laurie and Kay paid us an extended[...]