We have decided to try to sell our house in Sussex. I suppose the accent must be on the word “try” as the market in the UK is currently no more lively than a wet Sunday in Oberwil. But suitably encouraged by watching all those house hunting programmes on Sky TV, Alli is now looking forward to house hunting here in Switzerland. If anyone wants a five bedroom house in Hassocks please let me know. It will cost a little more than a pound.

I have cut back the bamboo by the pond in the garden, come what may and emboldened as I was by the landlord telling me that I should cut back as much as humanly possible this year as it would all just grow back again next year. I worked at the bamboo for the best part of a weekend, pulling many out by the roots and cutting back on many others. When I had finished the pond looked completely different although already I could tell that I could and perhaps should have been even more liberal in my decimation. The light was coming through to the pond at last and the sub-tropical overhang had been eliminated. I had also dismantled the fence that had been put around the pond. There was a huge pile of bamboo by the side of the pond, and many good and usable bamboo sticks which I am sure will come in useful for something. I also did some cutting of the hedge around part of the garden and pulled up some more wedges of pond grass, abruptly falling backwards onto a rose bush as I did so and lacerating my fingers in the process. I just hoped that the frogs would stay resident in the pond even with all the extra light flooding into it. But I did think it would be a bit like trying to continue to sleep after someone has wilfully drawn aside the curtains to let the bright sun stream in.

I have been out with Gwen several times, often just to go shopping (as the prospect of shopping with their Dad no longer excites Jessie and Ella) and more recently to visit Basel’s museums of a Saturday afternoon. So far, we have visited the Tinguely Museum and the Bayeler Foundation. At the Tinguely Gwen was excited by the possibilities afforded by the buttons that could be pressed to make some huge kinetic sculptures move around. Afterwards we walked along the edge of the Rhein into the centre of Basel, hurrying to catch the ferry across to the Munsterplatz. From the Munster we went down into Barfusserplatz then, as we walked along, we heard Jessie call out. She and her friend Kate were sitting leisurely at a café having a drink. We joined them and I was soon relieved of the price of a sandwich. It’s a small world, Basel. The next week we went to the Bayeler Foundation but for various reasons (including the fact of having to follow a very large crowd – three coachloads strong – of voluble third age Austrians) did not go in. We walked around the garden at first, admiring the big sculptures placed in the garden. Afterwards we went together for a while to the local park where Gwen played on the swings and slides as I watched, dozed, and thought about crop proetction products.

Alli has fulfilled a lifetime ambition and seen the Chippendales in action. I had thought it was a good idea to buy her a ticket to go to see them as a birthday present. The whole idea had nearly gone off the rails as Alli had already been tipped off about the boys’ visit and had started to make independent plans to go to the show with girlfriends of hers. Alli was in the process of rounding people up for the show and my plans to make it a birthday surprise for her survived, but only just, as she was emailing her request for tickets to a friend right up to the time that I actually gave her the tickets as a present. All’s well that ended well. Mind you, apparently they were not all that exciting. Well, I’m not surprised, to be perfectly frank with you all, especially in the actual circumstances of the situation, if you know what I mean.

I have been, fleetingly, in England, staying in one of those posh pub hotels with lawns so prevalent in Berkshire. At breakfast I was asked whether I wanted tea or coffee by three different people, and was then told that ordering porridge and kippers would be two breakfasts and not one. When I checked out, I noted that several cars in the car park at the front had been broken into overnight. Apparently there are gangs roaming around the home counties targeting these hotels and breaking into them at will and in full view of rows of surveillance video cameras. Lawless Britain indeed. Coincidentally, I came back to Switzerland with Saturday’s copy of the Daily Mail, as requested by Alli.

Yours from Middle Swiss 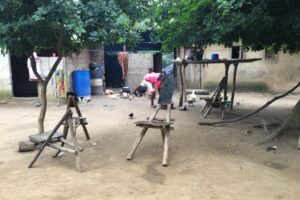 Ahem Recently I described a visit to a traditional healer[...]