The curse of Shango, Yoruba God of thunder and lightning, is invoked against the Jeep Corporation for indirectly selling me (in separate continents and two separate decades) two of the most financially ruinous, unsupported and unreliable cars I have ever driven. Joined on this fearful oath is Orange, which asserts that the fault preventing me from getting a network at home is not theirs but the secret work of shady security-mad Bank staff who put network-killer bugs on the computers of all its employees. A weekend of promising activity was kyboshed when I entered the smoke and mirrors that is the Orange technical support function on Boulevard Latrille. My company’s IT department and Orange’s technicians disagreed with each other about what was causing the blockage. I have been left in between, helpless with frustration, unable to use the internet at home either for work or leisure. That may seem an irritation in Basel or Paris, but in Abidjan it is life-threatening, as the only other recourse is Francophone African cable television and re-runs of splodgy episodes of Columbo. It’s also been a month of irritating paperwork, for I have also had to go to the local electricity company to make a declaration that I no longer use electricity at a flat I have not inhabited for three months and to the local Mairie to sign a copy of my passport to support the said declaration. I am getting used to staring blankly at a fluttering mounted electronic queue counter.

The rainy season sputters on, with showers sweeping over just when everyone thought it was safe to walk along the storm drains. My urge to travel further and more from Abidjan in my spare time was satisfied partially when I went on a drive to Dabou, 30 kms to the west on the lagoon. We found ourselves just behind the Prime Minister of the Cote d’Ivoire and several black 4x4s with threatening warning lights and nervous teenage pillion soldiers, so Mohamed flicked on the hazard lights, put on sunglasses and joined the rear of the convoy, potentially saving ourselves hours in the process by snaking around and through a monumental traffic jam that had built up because of the escort. We peeled off as it entered Dabou and walked around the village for a while, then ate freshly caught mackerel, pepper sauce and attieke. We also visited a truly surreal hotel, the “L’Autre Rive”, a folly-luxury built by a Frenchman with a vision – ten mod-con Corbusien cabins looking like mini ski lodge pods on impeccable and impossibly green lawns.

The following week featured Cote d’Ivoire’s National Day, and I glimpsed a long parade of white UN armoured cars driving past President Ouattara, a saluting sentinel in apparent upper-body paralysis. Since he had just released 800 political prisoners, consisting of the previous political opposition leadership, and is thinking about not contesting the 2020 election “to let the younger generation have its chance”, he may have been wondering whether his potentially gracious act of national reconciliation would work. One of the newly liberated, Konan Bedie, has already announced his candidacy, but he is a gnarled 88-year-old. (The President himself has recently been sighted in a wheelchair in Mecca). My money is on the charismatic Mrs Gbagbo, who has a touch of the Jackie Kennedy about her appearance (her husband awaits trial for war crimes in the Hague). One Sunday night I went to a Zouglou concert in Yopougon with Mohamed and the mother and son of the French family who are staying with me, but I had to leave early, as did the French visitors, whose grandfather has recently died. They took his body on a long sad journey to their family village a few days later. On the Ascension holiday I went to a new leisure park being built near Abidjan. “Green Valley” comprises several hectares of hiking, biking, children’s amusements, restaurants and bars. But it’s a work in progress. The surrounding forest was thickly planted with cacao and rubber (evea) trees, and the guide showed me some fresh sap collected from the bark of the tree. There were connected filtered fish ponds carved from the valley and supplied by the river. These ponds bring in plenty of fish, one of which I had for lunch with yams and salad after I had taken a Chaplinesque boneshaker bike ride around the property. I returned there on an organized group visit a couple of weeks later and it rained maliciously throughout, making it little more than a sodden walk around the ponds and an indifferent lunch in the draughty “VIP” restaurant. I have also visited Bassam and Jacqueville and I have slaked my thirst a few times at the ever-improving social hub of the Jardyland pub, where the proprietor one Sunday spontaneously invited me to join the fete champetre of his friends, featuring Senegalese tchep, good French wine, and a splendid plate of assorted French cheeses. The conversation featured discussions about the French football season and where to find good French cuisine in Abidjan. 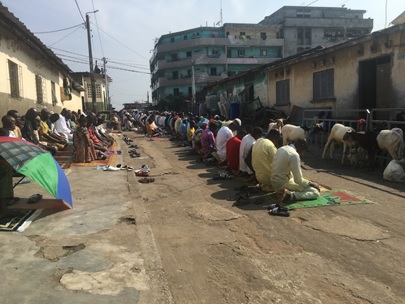 Mohamed kindly invited me to his family celebration of the Muslim celebration of Tabaski, or la Fête de Mouton, when the Muslim community commemorates the shared Biblical/Koranic event of Abraham/Ibrahim preparing to sacrifice his son Isaac/Ishmael on God’s orders until God relented and told him to kill a sheep instead. There must have been numerically hundreds of thousands of sheep in the market areas in and around the city being sold for slaughter for the Feast during the previous weekend. They were everywhere, in car boots and pickups, on buses, tuk-tuks, vans and taxis, or just tethered or led by a rope lead. On Tabaski morning, Mohamed introduced me to the local Imams of Adjame before I moved with a crowd to the Mosque, outside which everyone stopped and knelt to pray. (A bit like Upton Park in the early 1960s). A chair was set aside for me, giving me a long view of the short service in which everyone knew when to prostrate themselves, when to stand up, when to hold out their hands in supplication, and what to say in response to the Imam’s call. It was an impressive feat of collective devotional discipline from several hundreds of people (mostly men). Everyone I met or talked to was extraordinarily polite to me. The sheep, tethered at almost every other doorway along the street, just munched the remains of the grass that had been left for them. After the ceremony, I went back with Mohamed to his mother’s house where the women had already started to prepare the food. There was a haze of wood smoke and petrol fumes. As I wandered back on the long straight road I could see from the unwilling corners of my eye that some of the sheep were already being sacrificed. My first impression had been that the men were tenderly aiding the animal, which had fallen over, before the fact of the sacrificial ritual suddenly dawned on me. The universally accepted method was to cut the throat quickly with a very sharp knife while the head was kept close to the drain to allow the blood to pour away directly. I picked my way uneasily back, avoiding the huddled groups of men who were either skinning a carcass or cutting it up with machetes and axes. But there was no evidence that I could see of blood-lust, cruelty or inappropriate violence. It looked just like people preparing meat to be cooked, as in a butcher’s shop. I had also seen what many have not, namely the kill, the first stage of a process that led to the happy family meal. The religious aspect was paramount in a centuries-old tradition of ritual killings, (although much less cruel than the cynical dispatch of millions of farm animals killed around the world each day to make processed food). The sudden reality made me dizzy and I went inside the family house, where the cooking of yams, rice and foutou had started, with the women all squatting in a circle around the pots. I concentrated on the TV in the lounge which had an weird interview of a hijab-wearing female footballer known as “East London’s Hijab Messi”. But the story made real of Abraham and Isaac providing the Muslim faith with its biggest religious celebration of the year was more compelling. My own meat-free lunch was delicious, and prayers were again offered in my general direction for my perceived benevolence. I just hope the bloody prayers start to work.

Yours in the stalls,