Ahem
Another month of repeated and heavy snowfalls caused delays to our plans in many ways, but more recently the temperatures have climbed and the snow has disappeared and we are now merely buffeted by storm winds. The last day of the month has even been sunny and warm. We finally became legally insured drivers in France, but we have not, however, managed to acquire trans-frontier health insurance, after our insurance company tried to force us off their books even while Alli was being treated for her broken ankle. The company had taken tens of thousands of euros from me over five years and returned almost nothing despite all our expensive pills, potions and visitations, and did not trouble to explain properly to us the rules about moving to France. Neither did any prospective French insurer seem to understand what the requirements were. What is it with insurance and insurers? They swarm around you when you first need advice. They extract your prints and then you pay tall amounts to them but they either ignore you or mislead you when you need something or want to get out. If I was in power I would require insurance payments to be refunded if the insurable risk never happened. If they were then I would be extremely wealthy by now and they wouldn’t. So there. I suppose that these are among the reasons why I have never managed to get elected.
Ella went to Paris and enjoyed attending a conference on the future of Europe. She also went to England for a few days with a friend over half-term to stay with Nanny and Grandpa and managed to come back with a cornucopia of new clothes bought from London’s Oxford Street and the high streets of Brighton and Burgess Hill. During term time, she turned in some great performances in basketball for the school. Jessie, now in New Zealand, has started her job with MP Todd McClay and living with the McClay family and has told us that she is already having (another) time of her life. Her photographs, premiered on Facebook, seem to endorse this. Wakeboarding is her new preferred sport, involving the use of muscles she has never used before. This made me remember my PE instructor at school: “I’ve got muscles in places where you haven’t got places”. We had a sudden and fleeting visit from Alli’s brother Anthony and his work colleague, but I failed them both by being unable to get the Six Nations’ rugby on the TV, to their palpable disappointment. The man who was to install the all-important multi-switch to enable international television said that he wouldn’t scramble around snow-borne roofs and so we stay stuck with French terrestrial television. Gwen at last had her birthday party, which had been delayed several times since before Christmas, in a climbing arena which also served pizzas. She also went with the school to a soccer tournament in Zurich in which the team came second overall. Today she has been skiing with her friend Puck and her family.
Early each morning while Alli is still on crutches (and apart from the half term week) I have been walking the dogs in the freezing cold and pitch black, often sliding around on icy paths in the fields behind the house before driving the children to school then on to work. I have hardly ever driven a car to work regularly in my life, but now I pick my nose in traffic jams with the best of them then dutifully park the car daily in the company car park like a complete idiot. It would be very easy to stop thinking completely. I realize yet again that I am allergic to habit. But it has been too cold, too dark, too icy and too dangerous to cycle right now so I have reluctantly given up the velocipede until I can get back in the saddle again in the lighter and warmer mornings to come. I hum Gene Autry in the afternoons.
I was in London for a conference and had an interesting but short walk guided by a professional Londoner from the Embankment to Smithfield, during which I learnt a huge amount more about the city I have lived in for over 20 years. I also contrived to stay vegetarian in the city’s meatiest restaurant, the St John. A week earlier I was also in London, as my Aunt Margaret had died on the last day of January just before her 80th birthday, and I flew over to attend her funeral at the West London Crematorium, attended by a small number of friends of her daughter Diane and her partner Brendan. It was a simple service, but with all the grace and style of the our family’s generation of which she had been the last survivor. I stayed too long in the post-funeral social, missing my flight back in the process, but it was worth it for the rare chance of a family event, reduced in numbers as it was. I felt, even more strongly than ever, that now, with no parents or direct aunts or uncles left, I and others in this position are now at the top of the life-tree, looking out over the rest of the forest. Calm and happy to be getting older, relieved to be a parent, knowing that ours is the next generation to fall, but also hoping that there will be time to enjoy the view around and about us before we do.
Yours from the tree-tops,
Lionel 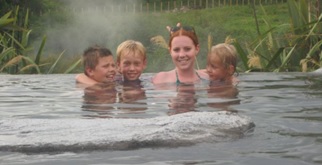 Jessie in Rotorua, New Zealand with the McClay children, February 2010

Ahem Alli and I have been going out together! Yes![...]