Abidjan is crammed with signs. From huge hoardings for big brands to rickety little notices nailed onto trees announcing personal services, and glorious swirly motifs justes adorning taxi bumpers, Abidjan informs, adverts, and persuades its world in words and pictures. On the back-bumpers of the suicidal rust-gripped taxis, popularly known as ‘woro-woros’, many of the messages are simple invocations of the Almighty: ‘Grace a Allah’, ‘Dieu Merci’, ‘L’eternel est mon berger’, ‘God Power’, ‘Alhamdililahi’, but some are advisory, especially relevant in their traffic-jam / joy-riding context: ‘Le retard empeche le bonheur, ‘Patience’, and my favourite, ‘Bonne Chance’. The signs are everywhere, stuck onto walls several deep, tacked onto trees and spare bits of wood, hanging from branches, and looped around road signs. Many of the large ads on commercial hoardings seem to be unregulated, as an advertising control body has taken the trouble to stick another (smaller) poster over the original to indicate that it is an illegal ad (probably because unpaid). The urge to communicate seems to cover all forms of human activity from religion (largely Christian than Muslim; Islam seems not to need snake oil, bumper stickers, mass baptisms, or stadium preachers) to health cures: some signs promise an early return to full health from prostate cancer and an immediate solution for erectile dysfunction as well as for leprosy, venereal diseases and AIDS. Others offer plumbing, electrical and carpentry services, visas to Canada, and of course, job ads for nurses, nannies, servants, cleaners, drivers, cooks, and gardeners. All promise satisfaction. 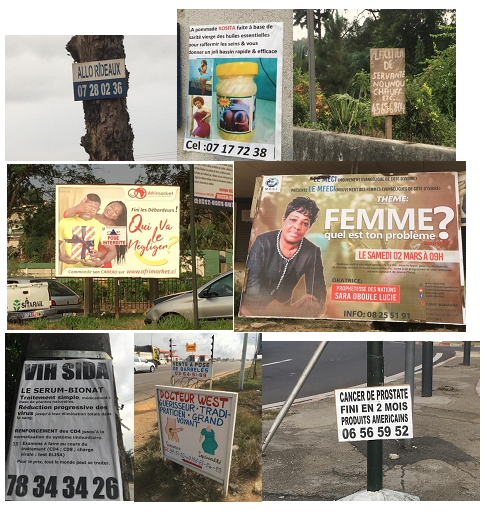 I attended a quiz night at the local pub in a team of other UK colleagues at the Bank. Out of 14, our table finished a healthy 2nd, runners-up by one point to the US embassy, who won last time. The smartly-dressed young ones on the adjacent table marking our scores were amazed at our performance on the music section where we scored 9/10 by instantly recognising and identifying obscure songs from the 1950s, 60s and 70s. Our official response was that we were all nerdy pop culture baby-boomers, but the real reason was covert access to Shazam. As an occasional quiz-master myself, I condemn this outrageous behaviour unreservedly. 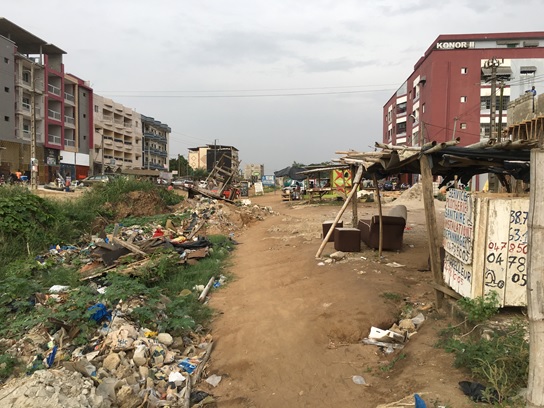 Those with a special interest in west African politics will know that the country’s ex-President Laurent Gbagbo was incarcerated in Den Haag for seven years at the leisure of the International Criminal Court (ICC). With one of his supporters, he was charged with various war crimes which can essentially be summarised as the state of having lost the violent and murderous civil war that broke out following his refusal to step down as President after losing the election. Thousands were killed on both sides, and in the end Gbagbo was arrested and removed by French soldiers from his base at the Sofitel. He was the first head of state that the ICC had ever bagged and it was proud of its capture on behalf of international justice. But last month, judges decided that seven years had not produced enough evidence to prosecute him. Gbagbo’s release, which was delayed pending a technical appeal, worries the French government. The Quai d’Orsay definitely does not want to lose what it regards as its fiefdom (you can tell from the imperial nature of the Embassy, a kind of modern Buckingham Palace expansively laid out to lawn and garden in the crowded centre of the city). Its presence is buttressed by sprawling French multinationals in monopoly positions throughout the Ivoirian economy, funnelling precious hard currency back to France. No doubt when the time comes, it will weigh in again to protect its lucrative investment in the natural resources of Cote d’Ivoire, which notably includes the world’s highest production of cocoa (the scarcely edible raw ingredient of chocolate), ivory having lost its allure long ago, and the slave trade its acceptability long before that. Gbagbo is now living in conditional freedom in Brussels, but this pleasure is compromised by being prohibited from returning to his country. But I am sure he will, and cause the popular stir predicted, probably before the Presidential election in September next year. Meanwhile, civil war winner and long-standing President Ouattara is openly expected to announce by next July that he will run for a third time, breaking his own promise that he would stop at two, and despite his coy demur about announcing it. He now says that the Presidential term counting re-starts from 2020 according to the new Constitution, which he pushed through the Parliament, and which 93% of voters approved – UK constitutionalists note – “in a simple yes-no” referendum in 2016 despite its startling absence of reference to the freedom of press, of trade unions, and of assembly.

A local story that started as an international “and finally” news gag is turning nasty and premonitory. An Ivoirian MP, Alain Lobognon, has received a six month suspended jail sentence after appealing against a conviction for spreading “fake news”. But his “fake news” was very real – a tweet that warned a fellow MP of his imminent arrest, which helped that MP to disappear before busloads of police really did arrive to arrest him. Lobognon, who had spent two weeks on hunger strike, supports the ex-Speaker of the Parliament, Guillaume Soro, who has just been sacked by President Ouattara, and also harbours Presidential ambitions. Next year’s elections for the political throne of Cote d’Ivoire, pace the French Republic, could be tense.

Mohamed’s application to his government for a tourist visa to visit France for a month was rejected. We think that they thought his international health insurance document, which cost him over 100 euros, was not dated properly. Alli, who has worked through Leymen’s Mairie, and I are trying again after getting advice from shady characters about how to complete the form with its trick questions – the issue of random visa rejection without stated cause doesn’t seem to be covered in the new Constitution. 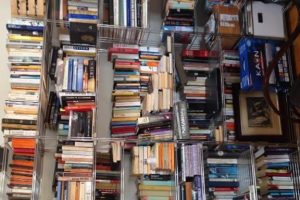 Ahem This month we have had many difficulties with our[...]