The first few days of the month of July found me alone in the house while Alli and the children were in England. This normally means that I fail to achieve the many ambitions that I plan for when the house is empty in this way, such as going through and sorting out (note the necessary inclusion of the word “out”) my increasing piles of papers that need attention, if not payment and settlement, or doing my tax return, or tidying up the garden so that it is commendably Swiss-style spick and span (or should that be Bristol fashion?) Instead, in such situations I often get the urge to lie full length for hours on a sofa watching extreme sports on television with the curtains drawn against the sunlight, or just to riffle idly through inconsequential publications. This time on the empty weekend in question I managed to avoid both extremities of option and instead veered uncertainly between industry, indolence and gluttony. I spent some time on the garden, using the neighbours’ strimmer to keep the growth down in the hedges and bushes. I spent some time doing heavy duty weeding at the side of the house. I listened to a lot of music at fairly loud volume. I pottered around reading back copies of the FT, working on the computer, and downloading a new file sharing program which I almost immediately failed to understand and operate and have since abandoned. I also spent time eating and drinking. In other words, a weekend that was neither lost nor entirely found.

We have bought a trailer. I am worried about this as it immediately puts me into a sociological category of which I am sure I do not approve. After purchasing it from a teacher at the school many weeks ago I realised only then that I could not pick it up without the right connection gadget at the back of the car. To this end the car was booked into a garage in Germany for the work which turned out to be staggeringly expensive, but would apparently have cost twice as much in Switzerland. Then it turned out that Swiss and German connections are not the same size or shape. I spent some hours researching and locating the correct transformer connections to ensure that the lights worked at the back of the trailer. Also, to the Swiss authorities, a trailer has a separate legal identity to a car, so I had to register it officially as well. Worrying also about the fact that we did not yet have a number plate for the trailer, I learned from a colleague at work that the trailer would need a proper licence and that only the cantonal control office could issue the number plate. She advised me to go there in person with the details for the car and the papers for the trailer, together with my passport or identity and other details. Unfortunately I did not have my own driving licence as this had been sent to the Swiss authorities in connection with my application for a Swiss driving licence (which had required me to take both an eye test and a general medical examination). I started to worry that the formalities that were necessary might not be completed in time for us to take the trailer away with us on holiday. I need not have worried so. Somehow this all got done thanks to my decision to go face to face with the redoubtable motorfahrzeugscontrolle one early morning in mid-July.

We have had our friend Ramon to stay with us for a month. He has a gift for finding and buying obscure music CDs and for drinking copious amounts of wine. Neither practice is inimical to our way of life, although Alli often turns the music down. He brought me a thoughtful present: the Greatest Hits of John Otway. There are 21 of these, I noted with interest. During the week that he was in Basel it rained for several days in a row. On one occasion Ramon and I had arranged to meet for a drink at the top of the Ramada Hotel tower (the tallest building in Switzerland, apparently) where there the top floor is the Bar Rouge. We surveyed the whole city from there in all its precise splendour, as well as noting the arrival from both sides of two separate electrical storms. The storms arrived on either side at once and seemed to cover up entirely the view of the city with dark swirling clouds and heavy rain pouring down at different angles. There was periodic thunder, curiously muffled-sounding as it circled and snarled around the tower, as well as streaks of lightning on all sides. It seemed as if the tower itself was being besieged, and it had just a tangible edge of nervous excitement in genuine Hollywood style.

Just before we went on holiday I was cycling into work quite early, freewheeling fast down Benkenstrasse in the sunshine. Near the bottom of the hill a car coming up suddenly lunged to its left and therefore right in front of me as I was in free and accelerating flight. I could myself only slam on the brakes while at full pelt. The bike stopped and I went sailing over the handlebars, landing with a breathless clump on my side on top of my bike in the middle of the road. My leg was twisted into the back wheel base of the bike. The side of my helmet had hit the road with a big crack (although I had felt nothing), my elbow was bleeding profusely, I had blurred vision and difficulty breathing with what seemed like a great weight on my chest. I lay in the road for a while moaning gently but sensing that I was on the edge of a big panic. Two men in white overalls (house painters) got out of the car and one of them helped me up and to the side of the pavement. I was breathing fast and feeling in shock, especially as I was still not entirely sure what damage I had done to myself. However, the net result was a couple of cracked ribs and sufficiently extensive bruising as to provide an excellent excuse not to have to put up tents.

Our holiday in La Hune, our house in South West France, was magnificent but I shall avoid being a “holiday bore” and restrict myself to one or two highlights. The holiday, which also included the celebration of Ella’s 12th birthday, featured some unforgettable moments and bizarre oddities, including a bat in the belfry, a mouse in the skimmer, shooting stars aplenty, a son-et-lumiere spectacular in the nearby town, a nine course dinner al fresco spectacular and a late night disco in our own village, and numerous memorable dinners and lunches in local restaurants and chez nous cooked expertly by ourselves and our friends.

But the unusual weather has been a constant feature of this year’s missives so far, and this is no exception. My friend Geoff and I had just cycled to Lachapelle to see the church and were on our way back when from the top of the hill we saw storm clouds gathering in one part of the sky, despite the sun and the clear sky in the rest of the firmament. As we rode back the storm followed us, getting bigger all the while as we made our way up and down the hills towards the house. Soon enough we were caught by the leading edge of rain, which spattered rudely down on our heads, getting stronger and stronger as we cycled on. Just as the last hill was topped, the rain turned to sleet and then to hail, then the hailstones suddenly became alarmingly big and started smashing hard upon the ground. By the time we were freewheeling carefully back down the hill towards our village we were unable to see in front of us at all and some of the hailstones were striking us hard and repeatedly on the body, the shoulder or the leg. Moreover they were starting to hurt and to bruise. I was also battling with a bike that seemed to have lost all its braking power (unlike my bike at home). Soon the hailstones, now the size of golf balls, started coming down even harder and faster, each making a loud smack on the road or a loud bang on the roofs and bonnets of the cars as we got past the first few houses of the village. Geoff stopped and dived for cover, and although I could see that the situation had become quite dangerous, I courageously went on a little way further and made it into Vivou’s bar, where he could be seen at the back desperately trying to staunch a flood of water that was coming into the bar from the back door. A small river was rushing past his doorstep at both the back and the front. I went out into the road a couple of times, drink in hand, to wave to Geoff but had to run back as the ice golf balls kept thwacking hard down on the ground. Cars, gutters and windows all around me were being dented as I watched. It all seemed like the apocalyptic scene in “The Day after Tomorrow”. Gradually the storm abated and I could see Geoff start to come back down the hill towards the bar. We stayed there for another ten minutes drinking a couple of Ricards, purely as a nerve-calming measure, then came home, where our families and friends had been battening down the hatches for all they were worth. While everyone was pleased and relieved to see us, we each noticed that only the two youngest members of our respective families seemed to have been acutely and urgently concerned about us and our fate in all the general commotion and hatch battening.

Oh well, we live to bike another day, 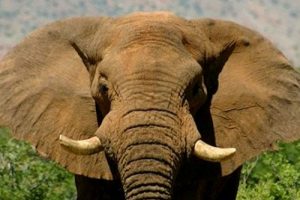 Agriculture is the elephant

There is cautious optimism about the economic outlook in Sub-Saharan[...]