We went to a restaurant in Huningue, Autour de la table, with the Jarvises and the Barneses to celebrate my birthday and where force majeure encouraged me to copy Gwen’s well-established record of eating meat only on her birthday. I had some very thoughtful cards and presents, including a log storage bag and a waterproof cap, which seem to make me look vaguely royal. All I need now is a Range Rover. The day was enjoyable only from 6pm onwards, as I had to spend the rest of the day locked in urgent combat with a particularly difficult writing assignment. I didn’t manage to kill it either, so I had to spend most of the weekend clubbing it repeatedly with a laptop and a heavy technical file before it finally gave up the ghost and became a persuasive policy paper. Alli and I also celebrated our wedding anniversary at the end of the month in quieter mode than the unexpected party of last year. Having solemnly agreed that we would not give each other presents, we surprised each other (earrings, flowers, a knapsack and a TomTom)

A week later, we all celebrated Dawn’s birthday over a weekend of fine food and hard walking (la marche populaire) in the Alsace, starting with a wander around Ferrette, then driving north to a comfortable hotel and a good meal in Turckheim, with another walk around the vineyards west of Colmar on Sunday, finishing with lunch in a cosy local family restaurant complete with gurgling babies and generations of motherhood in an Alsatian reminder of Mothering Sunday. Before leaving we forced ourselves into a quick wine tasting of the Grand Cru Brand made from the vines through which we had been striding for much of the day. Both walks had revealed some stunning views, of Ferrette, its castle, Bendorf and the Rechenwald woods; and the magnificent broad leagues of Alsace vines, their gnarled roots stirring in the springtime sunlit uplands around Turckheim and Niedermorschwihr. We all had another long marche together later in the month in Hattstatt, also amongst the Colmar vines, followed by a jolly wine tasting of the local Pinots Blancs and Gewurztraminer.

Ella has been accepted as a trainee at one of the smartest public affairs agencies in London. This is a great achievement as it’s a difficult sector to find and win such positions. This means that she will officially be a Londoner when she leaves Loughborough next month. She will hardly have dropped her bags in the hall before she runs in the London marathon, raising money for Worldwide Cancer Research and the Alzheimer’s Society. All donations will be very gratefully welcomed. We look forward to Ella and Sam staying with us over Easter. In other good news, Jessie will be coming to England for a few days in May for the christening in London of the latest addition to the Stanbrook family, Elio Clive Stanbrook, born just before Christmas last year to my niece Sophie. A rare and even unique family get-together is in full prospect. Jessie also spent some days enjoying the sights and sounds of Kuala Lumpur in a quickly organised mini-break from her job in Dhaka. Finally, Gwen has effortlessly made her way onto the school tennis team for her last year and so will be featuring in several games for the school in the spring and summer. She continues a fine Stanbrook tradition of being a bit better than average in tennis. She has also organised her friends to assist with an own initiative charity bake sale in Basel, complete with official municipal permissions to do so, and in which she did all the baking throughout Maundy Thursday. The sale, in various parts of the city on different days, is planned for the Easter holiday.

Purveyors of the airbnb web site will discover that in the area of Leymen, Alsace we are now offering overnight accommodation (the bedrooms of our departed daughters) to weary travellers. We have already had our first guests, who came, stayed and left without incident except for cancelling their order for breakfast, nullifying the reasons for my earlier panic dash into Hagenthal for croissants, pains au chocolat and other délices du matin to adorn Alli’s painstaking preparations. Bonnie was also found scratching at their door in the morning before they got up. It’s all good experience, as I affably counselled Alli, who acquired forty euros and a headache as soon as they left. But we have since had others, and all is going well, with brilliant reviews garnered from the guests. At the rough weather end of the month I drove to Brussels, where of course it rained, for a conference. I stayed with my brother Clive and sister in law Julia and met with diverse friends and acquaintances, also rediscovering the powerful properties of Belgian beer.

I have ventured into the garden and started to smooth the ravages of the winter months and to prepare for this year’s vegetable crop. The planting area has been extended with a lot of digging and soil enrichment, for which a few loads of friable black compost dumped in the local déchetterie have served very well. I have sown lettuce, red onions, beans, pak choi and beetroot seeds in the greenhouse, as well as seeds of the pohutukawa and the cabbage tree, in a bid to share the biodiversity of New Zealand. More reliably, the Forsythia throughout the Sundgau are flashing yellow – rather early this year.

Yours, awaiting the green shoots, and wishing you all a Happy Easter on this Good Friday 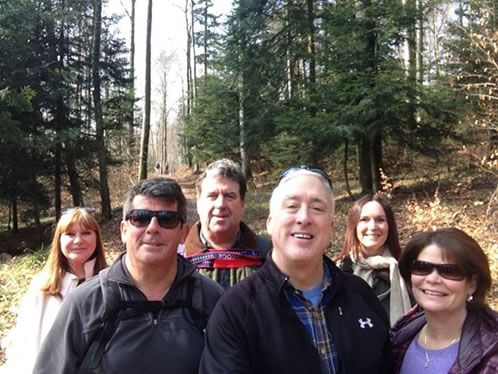 Ahem Sunny April has confirmed our suspicions that in Basel winter was[...]