The annual reception for the staff of the African Development Bank provided a suitable curtain-raiser for Alli’s first visit to Abidjan for two years. Within three hours of her landing in Abidjan, we were arriving at the reception just in time politely to applaud the last of several apéritif speeches. The dress code was Wakanda, which didn’t mean black leather cat-suits or digital body-hugging armour but a rich collective weft of many varieties of regional dress that created a colourful gallimaufry for the wandering eye. The next day, prosaically, we were at a flat on the Plateau to watch the Six Nations’ rugby with some friends. After nine weeks of abstinence from alcohol, I had a couple of beers to usher in the week of licence that was to follow. Later, I opened and appreciated the excellent birthday presents and cards that Alli had brought over from the family.

My driver Mohamed informed us that he and his wife Charlotte had named their newly born fifth daughter Allison Jane in Alli’s honour. This was a kind and unexpected gesture, and the next morning we visited the baby and her mother and family. Alli and I then mustered with others in central Abidjan for the coach to take us to the pre-retirement conference organised by the bank in Assinie. We were to learn about the procedures of my retirement and my new status as a bank retiree. Alli had no interest in the conference and spent most of her time by the hotel swimming pool, although she graciously ate meals with me and attended the opening and closing parties. I could hardly argue with her choices as I had presented the opportunity to her as a straight holiday. But it was a difficult week for me, as the proposed consultancy I had negotiated to follow my retirement had not by then materialised. This distracted my concentration during the conference presentations, one of which was entitled “Sex after Retirement”. The lady next to me got very bothered about this one. After muttering for a while into her embonpoint, she suddenly grabbed the mike and laid into the organisers, telling them that their duty was not to encourage it but to help the retirees to avoid it. And as a mother of five and grandmother of more, she was not about to restart all that stuff now. She had told her husband to find it where he could, but nothing useful would come from it, except possibly his demise, which on balance wouldn’t help anyone.

At the end of the conference, Alli and I toured the islands around Assinie by boat, seeing some of the palatial houses along the beach and lagoon, and stopping at an embouchure where the ocean met the lagoon. Although I had seen it before, it was exciting again to see the restless waves repeatedly tumbling past the beach then abruptly laying down in the smooth shallows of the lagoon, like an angry dog suddenly pacified. Someone picked up an almost perfect sand dollar while I searched for seashells. There was a party in the evening and all the retirees were given a certificate and a bag of goodies. Dance music from their respective countries was played as they came up. As the only British retiree, I found a suitable music clip for my moment after realising that the music-man was getting ready to play a reggae version of God Save the Queen and had not heard of either the Beatles or the Rolling Stones, let alone Cockney Rebel or Metallica. So I received my certificate while swaying around with Alli to George Ezra’s Listen to the man. In a few words, I then proclaimed myself African at heart and advised “Munna hannun Allah”, the Stanbrook family’s Hausa motto, We are in the hands of God, expressing precisely how I felt during the remorseless countdown to premature retirement and a broken employment contract.

The next day, I took a boat across the lagoon to the ocean and walked along the shoreline looking for sea shells, finding only a man from Bassam trying to sell his Baoulé masks. I told him what I was looking for, so he directed some boys loitering nearby to bring some for me, which they did. We then started haggling on the basis of half a dozen good shells and the masks. Eventually we reached a price which suited me more than him. By then we had attracted a small crowd from the village nearby who stared at us with feline interest. As I was paying the agreed money, an older man looking a lot like the village chief suddenly started talking animatedly in Baoulé to the trader. It didn’t sound very friendly and I feared some sort of complicated robbery since I was clearly in charge of a fat wallet while surrounded by locals. The chief had even picked up a stick from the beach to make his points more pointedly. I realised that it was not I but the trader who was outnumbered, since he had just sold and received payment for the boys’ shells and was not from the village. He had sold me the masks but wanted to keep a good margin for the transaction overall. Essentially, the crowd had gathered to ensure payment to the boys, as well as to levy an informal sales tax on foreigners (him). The same conclusion was dawning on the trader, who realised that he was in danger of losing his profit. Seeing my opportunity, I handed the boys some loose change then signed to the head man: “Are we good here? Can I go?” He nodded cheerfully so I marched off, sandals and sun-hat flopping and the bag banging against my knees, leaving the trader to save what he could from his long haggle with me and the money he had received on behalf of the others. His exact problem was that these others had turned up, as had their stony-faced fathers and uncles. When I looked back after five minutes, I saw that the scratchy squabble I had left had become a larger bustle of gesticulating villagers, with the trader still gamely arguing the toss somewhere in the middle.

On the final weekend of the month I joined a group that travelled by coach to Tiassale, a village to the north of Abidjan, where we hiked for ten hot kilometres, taking in the rivers N’zi and Bandama, and along the route from the River Bodo, that ‘effaces all memories’, along which those captured as slaves were symbolically washed clean, then transported to their fate (see masthead photo). The final lunch, beside the swollen Bandama, was a blessed relief. I felt humbled by the evidence of history, itself so often nearly forgotten. 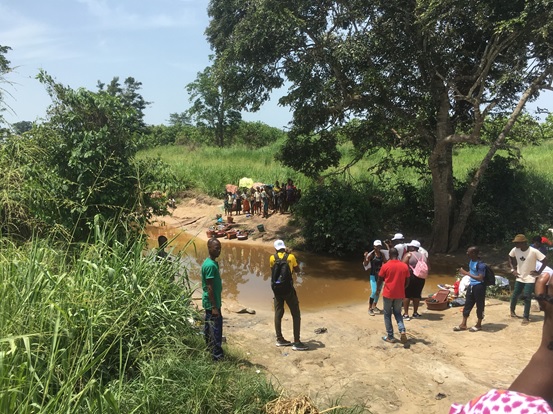 The River Bodo, that ‘effaces all memories’, Tiassale, March 2019

On my significant retirement-generating birthday I was given a delicious and classic African dinner by some Ivorian friends who had just opened their new bar in Angré Chateau. A fortnight later, I participated in a high-calibre group in a pub quiz where even mild cheating was impossible since I was sitting next to the British ambassador, who answered most of the questions herself without any help at all. I also hosted the Abidjan book club gathering (discussing Margaret Atwood’s searing indictment of gender inequality The Handmaid’s Tale) then threw an evening party afterwards to celebrate being 62 (a fact that keeps surprising me). People came numerous and brought generous presents, mostly wine. I also received spontaneous help in the kitchen when, in true African fashion, the party turned inevitably from ‘a few drinks’ into a major bash with birthday cakes, bouffe and bibulosity. At the thirteenth hour, the prospect of a personalised hard Brexit from the Bank has essentially disappeared and I am reviewing a long-awaited draft contract even though the formal deadline has passed amid the stopping of clocks and the termination of my Outlook account by Mr. Ed B. Blockchain. This momentous month also marked 30 years from the day Alli and I got married in Little Ellingham, Norfolk, providing the best of many causes for celebration. 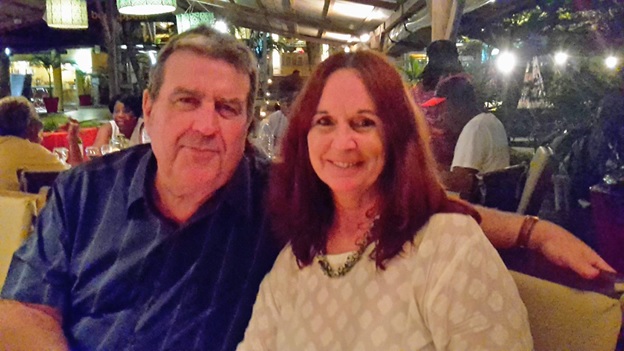 Ahem   Ella has landed her first job in journalism,[...]