I drove to the UK to visit my friends John and Jan as well as to pick up a year’s worth of our UK purchases (of long-awaited presents and books) sent to Laurie and Kay in Sussex. It was a long and hard drive to Calais from Basel, and a shorter but harder one in the extreme early morning on the M2 and A2 into London, after I spent a few fleeting hours of fitful sleep in a half-forgotten lay-by on the outskirts of Faversham, parked next to several Polish and Hungarian articulated lorries and their dormant drivers. The rush hour towards East London starts at around 5am, and much of this seems to be in 40-ton twelve-wheeled containers, with which I had diced death through the feline fog for most of the previous several hours. I arrived, nerves shot, in between shreds and patches of autumn mist, at the Tallis Lock residence in Forest Gate, next to a wispy and wet Wanstead Flats but under a clear blue sky smeared by a grand patchwork of jet streams. The combination of a warm welcome from the wonderful Jan, a hot shower, a brisk walk with Jan and Cleo across the Flats, and breakfast joined by Nat and his friend Becky, provided fulsome revival. After driving to Hackney with Nat, and parking the car somewhere slightly less than a taxi ride away, I saw John, bright-eyed and alert in a room in St Joseph’s Hospice near Mare Street. We talked about Sicily, classical history, the Labour Party, Brexit, our children, Donald Trump (pre-election), Tottenham Hotspur and the traffic. 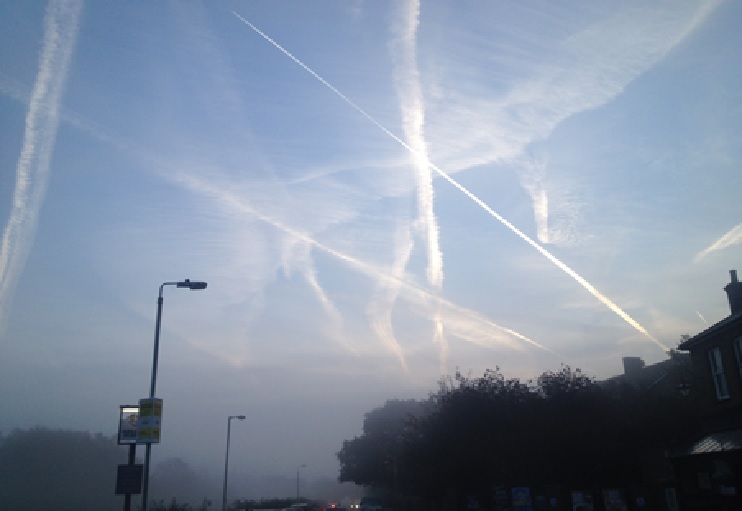 Near the end of the month, after I had been in Africa for just ten days and exchanged several chatty emails with him, John died. I was very lucky to have seen him so recently, but I am even more fortunate to have known him for more than thirty-five years as an excellent friend, brilliant writer, thinker, and absurd comedy genius. I thought back to sunny Spain in 1980, getting on together from the moment we met, sharing a hotel room, gossip and gallons of table wine and horchatas on an early post-factual fact-finding trip organized by the Society of Young Publishers – a trip that did nothing for our budding careers in publishing, untimely nipped.

Driving back to Burgess Hill, I fought my way through a clatter of lorries, rain and windscreen wipers in parts of south London that seemed familiar and yet somehow dislocated, with stretches of nearly village scenes sawn in half by brutalist dual carriageways and impossibly long warehousing units parading as shopping centres. I realised that I had completely lost touch with the warp of London travel, and puttered along dilapidated streets and potholed roads like a newly nervous Frenchman in a 2CV suddenly bereft of confidence, encircled and threatened by snarling sceptical Breakfasters in bigstupid cars. But I made it to Burgess Hill in good time and found another warm welcome, this time from Laurie and Kay, and from the visiting Dave Fisher. I didn’t last long after dinner and climbed upstairs into a guest bed suddenly comfortable from not being shared, allowing me the luxury of the soft centre, and slept for ten hours. The next morning brought work new work commitments, so I cancelled the visits planned in London, only managing to get out in the evening to have supper with Gwen in Brighton at the Prince George in the North Laines. Gwen came back to stay overnight with Laurie and Kay, and I had a second comfortable night soundly asleep after another fine dinner cooked by Kay. I returned to Leymen via Dover and Calais – a much easier and quicker journey than it had been outbound.

Alli cooked three curries for Bonfire Night with our friends, but it was raining too hard and too long to light any fireworks, let alone stoke a fire pit or even wave a handful of sparklers. In mid-November we had the first fall of snow: flaky and light, coinciding with the eight-year anniversary of our residence in the modern, palatial, and unique Wolfsloch, which we have now decided to sell. It will be hard for us to leave, but we had decided some time ago that we would move somewhere smaller. During the last week before I left for the Cote d’Ivoire, Alli was away in the UK also visiting Laurie and Kay, Gwen and Ella and some friends. I spent the week alone checking off a slew of items on my to-do list, including buying a good new suit, removing some junk from the garage to the dump, sorting out the mobile phone contract, resigning from various local associations and societies, making dozens of passport photographs, and grumpily digesting the US Presidential Election results. I didn’t manage to dig up the potatoes; Alli did that later. I dined with the Barneses and was treated to a delicious fish pie and an unforgettable cherry tart, examples of which I even took away for my lunch the next day. We also put up our feet and watched a film from Jasper’s online repertoire, then listened to some recent musical discoveries from the Americana catalogue.

The time came for the intercontinental relocation. Hours after Alli had arrived back from the UK, I left a chilly, misty and dark Basel early one morning and emerged into a late afternoon wall of stifling golden West African heat. I was picked up promptly at the airport by Mahomed, who was to be my driver, and taken to a small apartment arranged for me for the first month. It was a bit dingy (70s bedsit) but fine as a stop-gap solution, with working air-conditioning, a good wifi (a faster network than in either Leymen or Burgess Hill) and local TV. Mahomed met me later for a tour of the neighborhood and dinner in the street – Poisson braisé, atiekke et alloco (braised tilapia, fermented cassava paste and fried plantain pieces). He picked me up the next morning at 7am for work in a brand new office in the centre of Abidjan, in the Plateau district. Now, after two weeks of intermittent work, training, induction and circular administration, the most extensive medical I have ever had in my life, a local bank account, new IT toys, and plenty of box-ticked courses in all sorts of presumably consistent behaviours and values, I am starting to see a very changed professional life before me, and speed-written speechwriting has already begun.

Outside the office, it takes a few seconds to get hot and sticky, with daytime temperatures in the mid 30s and humidity up to 80% on some days. Getting to work accounts for between thirty and sixty minutes and the same back. Mahomed, fortunately, is proficient in Ivoirian metropolitan driving and knows how to choose quickly from amongst the various capillary routes, knowing instinctively when to avoid a traffic jam by heading suddenly down a back street (even one showing as a no through road) and re-emerge on a clear road going in the right direction. Pot holes are more like crevices here and one morning Mahomed took the car up a muddy and bumpy incline across a few private gardens and a building site that I would have thought twice about attempting on foot even with stout boots and crampons. The jams are like the mist on a heath in an early horror film, ever changing, stopping, turning around, lifting, dipping, then disappearing and suddenly reappearing. They lend a chimeric humour to the early mornings. He also knows the best local places to visit and we have been to several different districts of Abidjan, including his own, Adjame, where he invited me home to eat with his family. One weekend I was at La Grande Bassam, a sea-side town an hour’s drive east of Abidjan, somehow similar to London’s Southend but with a sandy beach and smiley people. There we went to a “cachette”, a secret drinking area where I bought Banji and Kokouro, both made from the palm fruit. The second of these is an eau de vie; the first is difficult both to describe and to swallow but I managed to finish it, ten days later. 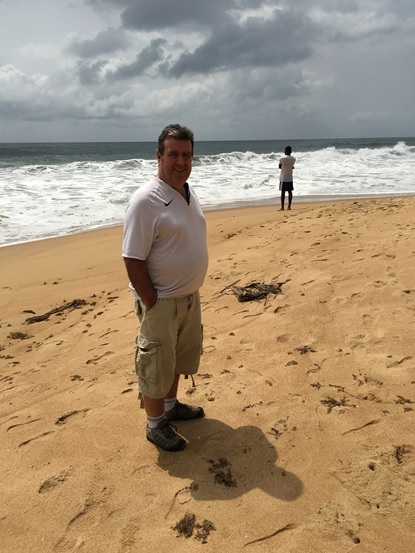 The next weekend I was in Jacquesville with another straight sandy beach, where I had Marmite de poisson after a walk past the dilapidating beach houses put up over 100 years ago by French colonials. I have also been to several city markets, viewed some villas and apartments, including one at Bassam, swathed in electric fencing, and generally have been able to explore the city, almost at will, thanks to Mahomed’s careful stewardship of my interests. The city is mostly peaceful and only gets noisy from dance music in the evenings or church services on Sundays. The traffic is apocalyptic but rarely gets to gridlock as there always seems to be a way through the jam, even if it means driving across someone else’s yard. The style of driving is pushy, dangerous and risky, and yet no one ever seems to lose their temper. Even hooting is unusual in your average Ivoirian automotive jumble. The evenings, as we move towards the hot season, are thunderous and the nights flash and flicker as in southern Europe, but the rain is, well… tropical. I am looking forward to Christmas in the Alsace and to seeing all the girls (Alli, Jessie, Ella and Gwen) together. Meanwhile, I wake in the heavy mornings to the sound of someone sweeping the road outside with a broom, incessant chirruping of the kotokoli and an occasional urgent rooster clarion.

Ahem The rainy season here in the Cote d’Ivoire should[...]