Ahem
In Cote d’Ivoire there are several different economies that co-exist but are segregated. The economy at street level in Abidjan is entirely cash-driven. With cash, you are powerful and you can bargain down the price as everyone needs cash flow more than they seem to need capital. Whether purchasing a month’s wifi coverage, a second hand car, or even renting an apartment, cash in hand will get you preferential terms and a serious discount over credit cards and cheques, which are widely regarded with suspicion. But when purchasing anything from a shop or taking a taxi ride, change of any sort is very difficult to get, even in a supermarket, and low denomination notes and coins – unaccountably – are not plentiful. Almost every transaction I make involving the need to get change inevitably ends with a scramble for coins and muddy notes that look like used tea bags and finally an invitation to buy some confectionery or chewing gum and even loose cigarettes as a substitute for the remaining change owed. Frustrated by the lack of small change (which I have never previously been concerned about) I went one morning to my local bank on the Plateau and, brandishing a note of 10,000 FCFA (about $15), asked the cashier for 20 notes of 500 FCFA (the lowest note available, worth about 75 cents/pence) in exchange. She said that she couldn‘t do it. When I persisted, asking instead for half my original demand, she shrugged with irritation, sighed deeply, and unwillingly extracted ten of the precious notes from a locked drawer, carefully counting them out no less than three times, handling them as if they were thousand-dollar bills with gold thread filigree. At the same time, large shiny and freshly minted 10 FCFA coins abound, each with a monetary equivalent of 1.5 cents and completely useless for anything except Shove Ha’penny.
A Hash House Harriers’ afternoon early in the month was a lot more enjoyable (if that is the right word for a two and a half hour trek through an African teak forest) than my baptism of fire the previous month on the endless beach in Bassam. I knew a handful of people from work and this made it easier. It was a spectacular trail, plotted through a protected forest reservation which incorporated several villages and plantations of teak and other hardwood trees, as well as large lily-covered lakes, mango swamps, papaya and pineapple fields. I jogged slowly or walked briskly much of the time but was very tired by the end of a 9km trail on a day with 75% humidity. The Abidjan Hash is unquestionably an unusual one, however, if only because it seems to lack much humour or irony. The proportion of beers in the coolers after the race is also disappointingly low for a club whose global tagline is “The drinking club with a running problem”. I shall keep turning up when I can and hope that my first impressions are wrong.
One club I have joined and already left is the Abidjan Oenophiles Club. I attended an excruciating dinner one Friday night during which a pompous wine historian described the intricacies of bio-dynamic wine production in huge detail and great length, rambling on for over 90 minutes with Powerpoint slides that contained huge slabs of text that he simply read, and even before we ate or drank anything. He also introduced each of the six wines with at least 25 minutes of oenophiliac dirge. This extraordinary event, I felt, could normally only happen in France, but I forgot the ex-French colonies where the supply of crusty old colonials makes it even more likely than in the Mother Country. The smallish crowd all knew each other and were lapping it up (the dirge, not the wine) and again I found it very difficult to break into any of the conversations between these Hurrah Henris. I left early (at midnight) and missed the final courses (including the cheese) and tastings. This unlikely direct action on my part indicates precisely how extraordinarily boring this had been. Conversely, it was a very different experience a few days later when I went with a group for a tour of the Cecile Fakhoury Museum Gallery, which sponsored and exhibited paintings by native Africans. The gallery’s owner, Cecile Fakhoury, led us through the gallery with the expertise of one who had lived it and breathed it from the first brick laid. I later learnt that she was a multi-millionaire patron of the arts in Cote d’Ivoire, related by marriage to the architect who designed the extraordinary Cathedral in Yamassoukro, a stunning piece of monumental architecture three hours north of Abidjan at the nation’s capital.
I started to make some preparations for Alli’s Abidjan visit, which we have fixed for later in March, to coincide with our 28th wedding anniversary. Keen to make the nine days as enjoyable as possible, I booked holiday leave and started to scout out places we could visit. I also toured Abidjan’s well-appointed and scenic golf course and visited the celebrity jet-set resort of Assinie. At work, the days continued like a runaway train. Keeping up with the urgent flow was as much as my energy allowed. The Chief of Staff changed job suddenly and a colleague with whom I was working abruptly left. A wholesale re-organization from which I assume that I am secure, having arrived at the very end of it, started to take effect. I continue to lack a job description, which may be a blessing in disguise. However, I was suddenly included in several of the mission lists to accompany the President on official, state and other visits to other countries. After the first months of no foreign travel at all, I was roped in for a week in Khartoum, for a couple of days in London, and visits to Dakar and Berlin, all by the end of the next month. 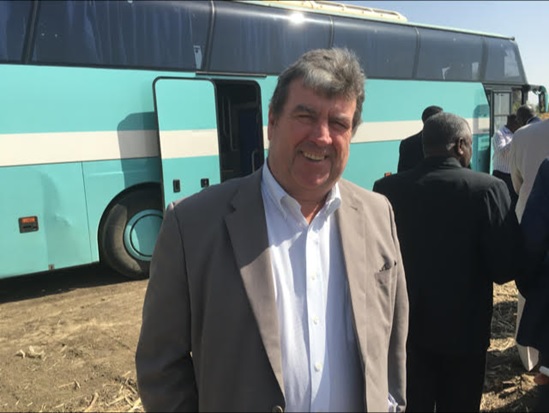 My maiden trip was a five day official state visit to Sudan, one of the poorest countries in Africa, despite sitting on a huge subterranean lake of oil into which precious few drills have been sunk to date. It is one of Africa’s biggest countries by area, but most of it is uninhabitable. The Nile (blue and white) ensures, often dramatically, that large amounts of irrigation, investment and intelligence can be used together to change the picture. The country has been subject to over 20 years of US sanctions, copied by Europe, as punishment for its overt involvement in international terrorism several regimes ago, one of many examples of a population being punished twice, once by their rulers, then again by an international community unable to separate a country’s people from their own oppressors. It is also one of the dreaded countries on the Trump immigration list. Despite the sanctions (which also ended investment aid), domestic terrorism aimed at the oil and gas infrastructure, and the secession of south Sudan (where most of the oil production is located) the country has miraculously not only survived but even kept the books relatively balanced, despite a historic and catastrophic debt overhang of $45 billion (mostly interest arrears and penalties). I accompanied the President in his meetings with Ministers and diplomats, central bankers, investors and entrepreneurs. We had a boat trip on the Nile, a dinner on the lawn of the Central Bank, and genuinely fascinating visits to a cement factory and a sugar factory. Through the week I listened to long lists of investment needs, ate dozens of dates, and took careful notes of all the meetings. Staying in an expensive but rather dull and soulless hotel, I spent most evenings revising the meeting notes, drafting the speeches and programme for the following day, becoming progressively more tired as the week went on. I came back exhausted via a long stopover in Accra. There was time during a recuperative weekend to attend a Muslim ritual house warming ceremony which included ten singing imams; by contrast I then spent a breathless evening in the company of Brazilian dancers at a swanky villa behind the US Embassy.
Salam Alaikam
Lionel