Every morning and every evening over a million straw-coloured fruit bats make the flipflop-flapping journey between Abidjan’s various luscious green, forested and tree-studded districts and the central business district, the eponymous Plateau, half of which is a disintegrating collection of concrete boxes spotted by lines of unhealthy trees, the other half a well-appointed Presidential Palace with extensive gardens and grounds with sleek government buildings. The two halves co-exist on a prominent peninsula in Abidjan’s environment of land, sea and lagoon. By day, the Plateau’s mango trees are multi-clustered by the bats, jostling, squalling and swapping perches all day long until dusk when they all flap back to their separate suburban homes. I have no idea why the bats make this diurnal migration to sleep in the car-exhausted heat downtown, but they reverse the practice of the Abidjanais who sleep in the suburbs then ride every morning to the central district, using arterial routes much as their radio-aware mammalian cousins do in the sky. The late afternoon rentree, starting from around 5.30pm, is a sky-darkening celestial bonanza. For the bats, the arrival begins a nightly hunt for rotting fruit and vegetables in the forested suburbs and villages of up to 40 kilometers from the Plateau. In the pre-dawn there is a collective aerial scramble back into town. For the first two months in Abidjan, I was under the impression that the endless colony was composed of high flying swifts. When I looked at them more carefully I realized that they were not darting around catching insects and that they had teeth. Known as “the farmers of the tropics” they regurgitate seeds constantly during their long migrations and nightly foraging flights. They also eat piles of fruit, up to nearly twice their weight each night. No wonder they just hang during the day.

Abidjan started the month hot, with temperatures above 30 degrees, but ended it almost arctic, with the barometer down to 25 degrees. Rain continues to occur without warning, dropping in curtains, drapes and tapestries, turning the baked sand that piles up on both sides of the roads into eddies of brackish rippling dust. On some mornings, the main carriageways into the plateau are bracketed by elegant women with brooms, sweeping debris and dust efficiently into the verges. This happens particularly when there is an official state visit, causing traffic-jams to allow gleaming black motorcades to slide past, siren-hurried, earpiece and check-watch-important. My increasingly expensive Jeep with dodgy number plates is gratuitously washed by the guardians every morning before I clamber into the high-set car with difficulty and without dignity. Increasing pressure at work has led me to seek the solace of the beach with interesting company whenever possible and I have visited both Assinie and Bassam during the month, glad to watch the powerful waves crashing interminably onto the sand. One recent visit to Bassam uncovered an excellent place for lunch, an Italian bistro by the bridge serving pizzas, pasta, and chicken yassa. I ordered a large pizza with tuna, bananas, tomato, cheese, green peppers and anchovies, but was defeated before I got half way through. Mohamed ate the bagged other half later that day after telling me first that he didn’t like pizza and second that he had never tried it. This was just before a Hash run in the locality, which took me 16 kilometers around the savanna of Grande Bassam, past several villages where children lined up to grasp my hand as I puffed past. One of them then rushed away shouting “Hey everybody, I’ve just touched a white guy!” (translation from the local dialect provided by an amused onlooker). The run, mostly an arm-swinging amble, was quite a challenge, especially as poor preparation led to several dead-ends and about-turns in the route. While my forward movement was impelled by my concerns about getting lost in the woods, I was not capable of much movement either way for the rest of the weekend so I read books and watched Netflix fixedly like a millennial, finishing series 3 of Line of Duty in two days and moaning gently whenever I had to move my limbs. In Assinie the week previously, I stayed at the African Queen hotel with a friend, then we took a boat (not the African Queen) around the islands of the national park, protected from the planet’s great devastator by an embarkation ban on all humans except card-carrying botanists. A guide assisted with information and wildlife identification. I imagined wild animals peeping out from the lush shrubbery as if in a Gary Larson 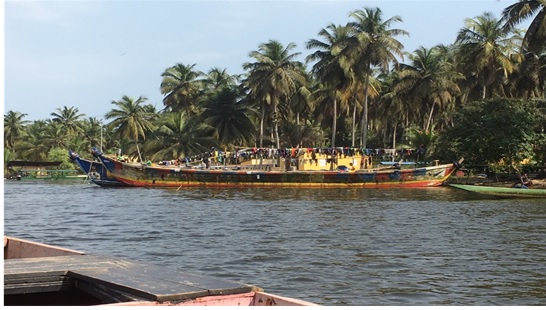 Clothes line on the edge of the Assinie national park

cartoon of jungle animals waiting in an orderly queue to gape at us through gaps in the rushes, with the view from the boat of a line of curious but different pairs of unblinking eyes. Another fortunate find, a café with good food in the village of Yaoue on the road back, contributed to a great weekend as well as a healthy suntan. One evening in Abidjan I went to a petanques evening, and I managed to throw a few game-turning boules in one of three well-built boulodromes in the garden of La Boule Bleue. On another evening I attended the Bank’s annual staff party, a large affair under a big tent in an even bigger car park by an enormous hotel. There were speeches, awards of medals for long service, and plenty of music, dance, food and drink. I was noticed dancing, more or less to the rhythm. I have also been seen in a few establishments in the city’s “quartier chaud”, in the swing of things while the not-so-low chariot waits outside.

I used to be a teenage long distance runner in the early 70s. However, the apogee of my athletic career was the 1982 Brussels half-marathon. I was sponsored by the Brussels pub Sergeant Pepper’s and Jupiler beer. Or wait, did I sponsor them? Anyway, my daughter Ella is running the London Marathon in April for the worthier benefit of Children with Cancer. She and I would be delighted if any friends and relatives might consider sponsoring her using this link.

Ahem We had some welcome visitors at the beginning of[...]

Ahem April has been described as the cruellest month and[...]