November is the most useful month of the year. It gets used a lot. For example, as a considered pause before the rush of Christmas. November is an excellent month for contemplation and reflection, the calm before the storm. Even the weather, grey, white and black, is silent and somehow expectant, although peaceable. The Alsace countryside is vested in the winter bloom of a gay mourner, having effortlessly replaced its autumn browns, yellows and reds with silvers and greys (whilst mere mortals such as I find it difficult even to remember to get the winter tires on the car). The first snowfalls have occurred and mornings trudge slowly, struggling to create enough light and warmth to get through the day. And yet we also have breaths of an Indian summer, as if the sun is an absent-minded aunt, completely forgetting that she is supposed to stay away from the threshold even as the frost lingers cruelly after dawn.

Last month I drove to and from our house, La Hune, in Mansonville, a small hilltop village in the Tarn-et-Garonne. The main reason was to meet a French couple interested in renting the house. I wandered south west in the car through the breadth of France without haste, avoiding the motorways and stopping where and when I pleased. This is France at its very best, impromptu. Once in Mansonville, I undertook social calls and consultations with the village elders and personalities, including the mayor, and taking advice from Jacques and several others connected with the house. The couple, an architect and a concert pianist, want a long let of at least three years while they improve the house by installing heating, roof and wall insulation, carpets in the bedrooms and new wiring throughout. I gave them an encouraging answer and they are now getting estimates from local suppliers. Renting La Hune long term could change our lives; it has been our holiday home almost every summer since 1997.

The social group in Basel that I help to run, EnglishSwissTalk, toured a microbrewery in Klein Basel and drank plenty of the establishment’s Ueli beer. The tour was eccentric, as the guide, a doppelganger for Antony Hopkins, spent much of his introduction apologizing for his English but boasting fluently of his success with women who “came off the oil tankers in Liberia”. Admittedly there wasn’t a great deal to say about the large and taciturn machinery standing shiny sentinel while gently bubbling below well swabbed decks at the Fischerstube. 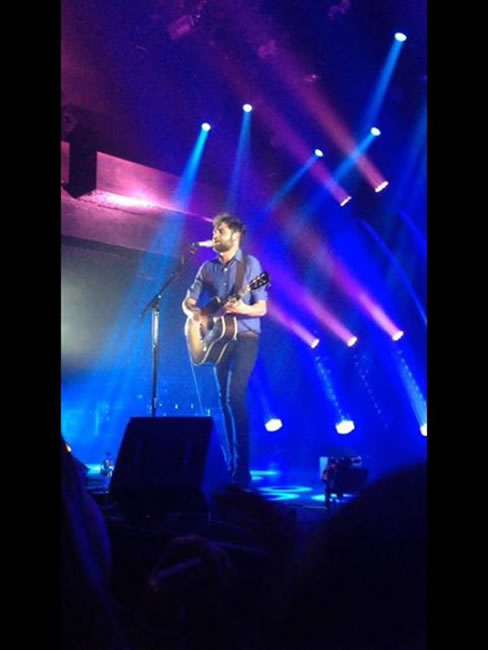 The local English-speaking dramatic company, the Basel Semi-Circle Group, put on a collection of one act plays entitled Greener Grass, and as this was the first public event sponsored by my company Clement Reputation GmbH, I went to see it with my friend Melanie. We both enjoyed some of it but each enjoyed the parts that the other had not, making it a mutual curate’s egg. A few days later Gwen, Alli and I went to Zurich with LeAnn and Jasper to see the solo singer-songwriter Passenger in concert. I was back in Zurich later in the week with Gwen to see the band Swim Deep. Gwen had been sure that, as with Passenger, there would be a queue of younger people lining up by the gate before the doors opened, but this did not occur, which was a pity because it was raining and cold. A few scattered people could be discerned standing in the shadows and under cover. In fact, when the gates opened, no one moved for several minutes. But Gwen got a selfie with the band’s lead singer and so was happy enough. I thought it was the least he could do as the band had only been on stage for fifty minutes when they stopped, claiming that they had no more songs to sing. Gwen has just been to yet another concert in Zurich with some of her friends and Alli, to see Imagine Dragons, where she lost her iphone at the venue and was very unhappy all night. But not for long afterwards: it was duly handed in and promptly returned to her. As Alli remarked “I love the Swiss!” And so say all of us…

November is also the month of Basel’s Anglican Church English Book sale, an annual event stimulating nothing less than a Gadarene rush of scrabbling humanity dedicated to getting the best bargains in books, suet pudding, mincemeat and clothes. Last year I detailed my unsuccessful strategy to be put in charge of the enormous operation that is the English book sale. So this year I just joined the other swine looking unconcerned in a semi-circle around the closed main door of the church one Saturday morning. Once in just after 9, I went straight to the books, as I always do, and came out an hour later with a good selection in three large carrier bags.

We had dinner at our allweather friends the Barneses, the evening marked also by an excellent filet mignon, characteristically fine wines complementing modest, light and prudent chit-chat. On two consecutive Friday evenings we also ate at our excellent village restaurant L’Ange, taking advantage of the hunting season menu.

Another good use for the month of November is novel writing. I followed a web site initiative called Nanowrimo (National Novel Writing Month) while I had a dearth of pressing client work. So it was that I spent the first fifteen days of the month writing a novel at the rate of 2,000 words a day. Just as I was getting to the part where I had to give the the plot a final tweak and develop my main characters, ready for the final lap, I suddenly acquired a large amount of urgent professional work to be done forthwith and had to abandon my efforts mi-cuit. I now have half a novel and too much client work to restart it soon. But with a new resolution, added determination: and now some actual experience, I should be able to finish it before next November kicks off the need to write another.

I spent the last days of November and the first weekend of December in Brussels, staying with brother Clive and sister-in-law Julia, meeting old friends from older days and finding new clients (sometimes in the same meetings). It was a particular delight to catch up with my friend Brian, then a hopeless drifter, now a top European lawyer, to find, as with the very best of friends in life, that even an absence of nearly thirty years did not induce one second of hesitation before we both ploughed straight back into exactly the same relationship as before, continuing discussions left hanging and contentions left unresolved when one or both of us went out for a packet of fags one madrugada some time in the mid 1980s and never came back.

My visit was deliberately timed to coincide also with the arrival in Brussels of my friend Todd in the disguise of a New Zealand Government Minister. I also saw two of the legendary Ramsay brothers at leisure in the Café de la Foret in Jezus-Eik just after I had taken Todd and his colleague Rob to see the proud Lion at Waterloo on a bright and clear Sunday morning. I also renewed acquaintance with the justly famous Chez Léon when Clive, Julia and I, feeling in need, all went out to eat the best comfort food in Brussels, cocotte de moules marinières with chips.

I end this on a sad note. Sheena Bethell, a busy, blonde, fit and feisty Canadian, had been fighting a virulent cancer for nearly five years with humour and grace. She helped me significantly when we worked together at Syngenta and became a close and trusted friend. Brian, her devoted husband, told those of us who had been keeping in touch with her via visits, emails, web site, on-line diary and an unfeasible amount of accidental meetings, that she passed away at the weekend. Her (their) encouragement of others and their own courage in their challenge was quite amazing; I have never seen anything like it (or anyone like her) before. We’ve got holes in our hearts.

Ahem   There has been a revolution in our household.[...]

Ahem There was a pleasing symmetry to this month as[...]